Small cell technology will be fundamental in mobile network coverage expansion over the next five years, as both wireless operators and enterprises leverage a combination of indoor and outdoor solutions to deliver 5G services as broadly as possible. While dense urban/metro and adjacent suburbs will be the primary focus, operators such as T-Mobile US Inc. that are asserting "nationwide" 5G coverage are also targeting rural areas for small cell deployments. According to new research from Kagan, global small cell shipments are expected to grow from 2.9 million units in 2019 to 3.7 million units by 2021, and 4.2 million units by 2024. 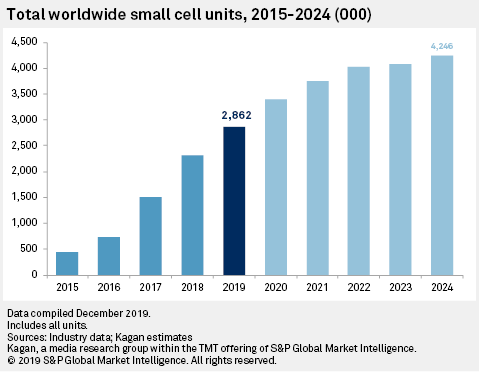 Total combined indoor and outdoor small cell revenue is expected to grow from $1.9 billion in 2019 to more than $2.2 billion for both 2021 and 2022, then decline slightly to just above $2 billion for 2023 and 2024. Following an established progression, we expect small cell revenues to decline even as unit shipments increase, as operators in all regions continue to expand their 5G network and service footprints and ASPs decline. The Asia Pacific market, led by aggressive 5G buildouts in China, South Korea and Japan, is seeing the highest volumes of small cell deployment. North America, driven by U.S. operators Verizon Wireless (VAW) LLC, AT&T Inc. and T-Mobile (which is using 600 MHz low-band spectrum for broader coverage per cell), is also a hotbed of small cell investment and network expansion efforts. Meanwhile, operators in Western Europe and India are likewise increasing their attention and capital spending on small cell densification. Operators in other regions, in addition to highlighting their 5G plans, are also implementing 4G LTE network enhancements, especially in markets such as Eastern Europe, the Middle East and Africa, or EMEA, and Latin America and Caribbean, or CALA, where current 4G coverage and capacity deficiencies must be remedied. 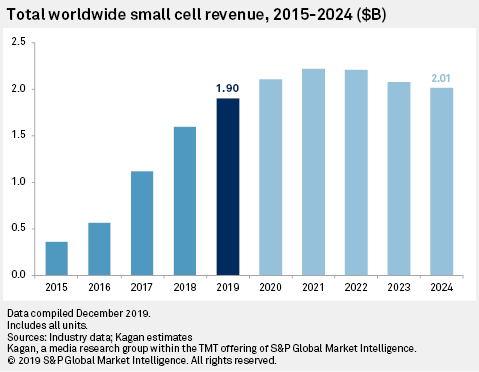 Despite the hype surrounding 5G, to be clear, 3G and 4G LTE deployments are expected to be strong through the next five years, and remain the dominant technology in terms of volume shipments until early 2022, when cumulative 5G small cell units will finally overtake 3G/4G LTE. Why? The fact remains that the ongoing small cell investment and deployment focus by operators worldwide, especially in the largest countries – China and India – is for 3G and 4G LTE network enhancement. And while outdoor coverage expansion is fundamental, indoor small cell network densification is also a top priority for all wireless operators, especially where outdoor coverage is already relatively saturated from a subscriber-per-cell standpoint.

Nevertheless, 5G technology is being deployed in earnest by operators in all global regions, although CALA — the smallest wireless and small cell market by far — will continue to lag significantly behind other regions. The initial 5G deployments, for example, in North America, have been with new radio, or NR frequencies, i.e., the 450 MHz to 6 GHz range, and the millimeter wave (mmWave) spectrum range, from 24 GHz to 52 GHz. The NR 5G small cells deployed by operators such as Verizon and AT&T in the U.S. include both standalone, or SA, and non-standalone, or NSA platforms, the latter leveraging existing 4G architectures and infrastructure to support both 5G services.

As small cell densification by wireless operators moves forward, integrated small cell platforms supporting both 5G and 4G radios will overtake the combined 5G NR NSA/SA small cell shipments in 2021, after a projected dead heat in 2020. The cost of integrated 5G/4G platforms may remain an impediment to the speed of investment for operators, but as volumes ramp up, prices will be driven down accordingly. Nevertheless, operator imperatives for 5G densification will spur accelerated growth of the integrated 5G/4G radios, with an inflection point in 2021 which continues with robust growth of this technology through 2024, as illustrated in the graph below. 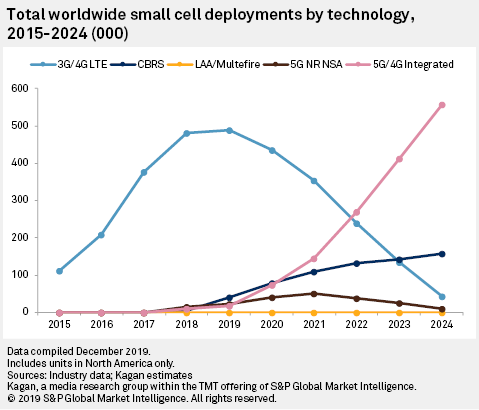