The 11 companies in the report represent almost 80% of total fixed broadband households in Latin America and the Caribbean.

Over the past seven years, broadband has become an increasingly relevant revenue generator for Latin America's 11 largest telecommunications groups. In 2018, fixed broadband overtook multichannel and now holds the largest share of top groups' fixed service revenues, at almost 40%. This is mainly due to the decline of multichannel and fixed telephony revenues as consumers increasingly cut the cord, as well as broadband's consistently higher average revenues per user, driven by the product's increasing value perception among Latin American consumers.

Broadband revenues for the 11 groups considered in this report grew an average of 3.0% annually from 2011 to 2018. This study considers broadband revenues and subscribers as reported by operators, which includes residential and commercial broadband services. Of the four services analyzed in the report — multichannel, broadband, fixed telephony and mobile — broadband is the only service offered by all 11 companies: América Móvil, Telefónica, AT&T, Liberty Latin America, Millicom, Grupo Televisa, Megacable, Telecom Argentina, Oi, Entel Chile and Telecom Italia.

From 2011 to 2018, fixed telephony's share of revenue-generating units, or RGUs, among Latin America's top 11 groups fell, while broadband grew and multichannel stagnated. At almost 60 million subscribers in 2018, these 11 companies represent approximately 80% of total fixed broadband households in Latin America and the Caribbean, with América Móvil's Claro and Telmex and Telefónica's Vivo and Movistar brands dominating the segment. 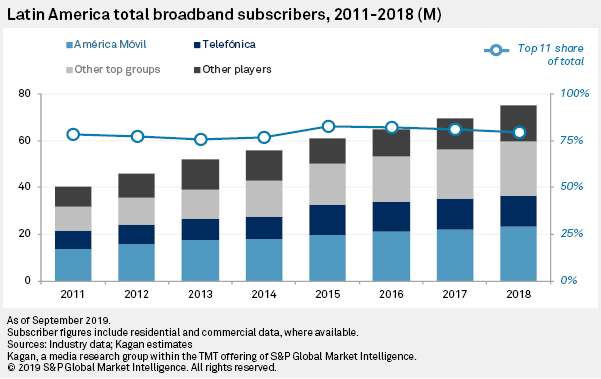 Despite their dominance of the Latin American fixed broadband market, these companies' position as telco and cable incumbents in many countries means their leadership is disproportionately reliant on legacy technologies. While DSL dropped below 40% of total broadband households in the region, among the 11 top groups, the platform still represents more than 40% of broadband subscribers. Meanwhile, fiber represents a mere 9.2% of the top companies' broadband subscribers, compared to the regional total of 16.2%, highlighting the prominent role of small ISPs in leading fiber growth in Latin America.

Recent new entrants are expected to boost fiber subscriptions among the largest operators going forward. Telecom Italia's TIM Brasil launched fiber-to-the-home, or FTTH, offers in 2017 after many years' success with its fiber-to-the-curb solution. Entel Chile is expanding its residential products and launched its fiber bundles in 2017, and Oi resumed its fiber network expansion after reaching a deal with creditors in 2017. Telecom Argentina began deploying FTTH following its merger with cable operator Cablevisión Argentina in 2018.

Although fiber is expected to drive ARPU growth, as the service is usually offered at higher speeds — and prices — than DSL and cable, this is likely to be counterbalanced by increased broadband adoption by lower-income households. In general, new market entrants and competitors to incumbent telco and cable operators registered lower broadband ARPUs. Mexican MSOs Megacable and Izzi offer aggressive prices and discounts for bundled services to compete with incumbent Telmex, which controlled 48.9% of the country's market in 2018. Similarly, AT&T and TIM Brasil offer services at competitive prices to gain subscribers from América Móvil, Telefónica and Telecom Argentina's incumbent operations.

The exception to the higher ARPU expectation is Oi, due to its position as telco incumbent for most of Brazil, which means the company has a high penetration of low-income residential users, reducing its ARPU. Entel, on the other hand, enjoys a higher ARPU because it only recently turned its focus to residential fixed services, having traditionally operated mainly as a business service provider in Chile and Peru. Entel's ARPU is declining as the company expands its residential footprint.

Fixed broadband consistently remained the service with the highest ARPU for the top 11 groups throughout the eight-year period analyzed. However, it has experienced a downward trend since 2011, declining by an average of 6.3% a year.