Lithium supply is set to triple by 2025. Will it be enough?


Lithium supply is set to triple by 2025. Will it be enough?

Lithium prices plummeted in 2019, as the market tipped into oversupply and EV growth slowed. Production of the battery metal is set to almost triple by 2025 to more than 1.5 million metric tons, but there are concerns that a fall in upstream investment could flip the market into undersupply further out.

Lithium is an integral component of batteries for electric vehicles. As EV purchases have rocketed – over 2 million vehicles were sold in 2018 alone, according to S&P Global Platts Analytics –so has the need for batteries, in turn fueling lithium demand.

On the expectation of further fast growth, investment has flowed into the lithium supply chain at a brisk pace over the past few years. However, prices have dropped this year, drawing down with them enthusiasm for new projects.

One project facing difficulties is Nemaska Lithium’s Whabouchi mine in Quebec, Canada. Nemaska recently announced layoffs as it attempts to ensure optimal cash flow for the continuation of the Whabouchi project.

Another is China’s Tianqi Lithium’s plant in Western Australia, which began lithium hydroxide production in September. Alongside the start of operations, Tianqi announced the postponement of the second half of the 48,000 mt/year project, citing poor global lithium prices for the delay to the plant, which was initially expected to be commissioned in full by the end of 2019.

At the same time, industry participants warn that the headline fall in prices does not tell the full story. They argue that the present situation is short term, with demand for higher-quality grades set to recover, while the mismatch between lithium spodumene supply and processing capacity bottlenecks in China, a factor in current price weakness, will be shortlived.

Nevertheless, the weak market has led to greater caution among investors and suggests potential for a tighter supply picture in the later part of the next decade. The industry will have to adjust to the new conditions and straighten out the kinks in the supply chain, in order to achieve a sustainable supply that can fuel the unfolding transport revolution.

Lithium is mainly sourced from either spodumene or brine. Australia is home to the majority of hard rock (spodumene) mines, while brine production is concentrated in South America, mainly in Chile and Argentina.

Despite the press attention garnered by South American brine operations in the past few years, it is Australia where supply has grown rapidly, with shorter project lead times of only 3-5 years seeing a flurry of hard rock mines pop up. In contrast, brine projects can take 7 years to go into production.

Lithium carbonate and lithium hydroxide are the two lithium compounds employed for battery cathode production, with carbonate currently making up the bulk of usage. In brine production lithium chloride is extracted from alkaline brine lakes before being converted to carbonate. 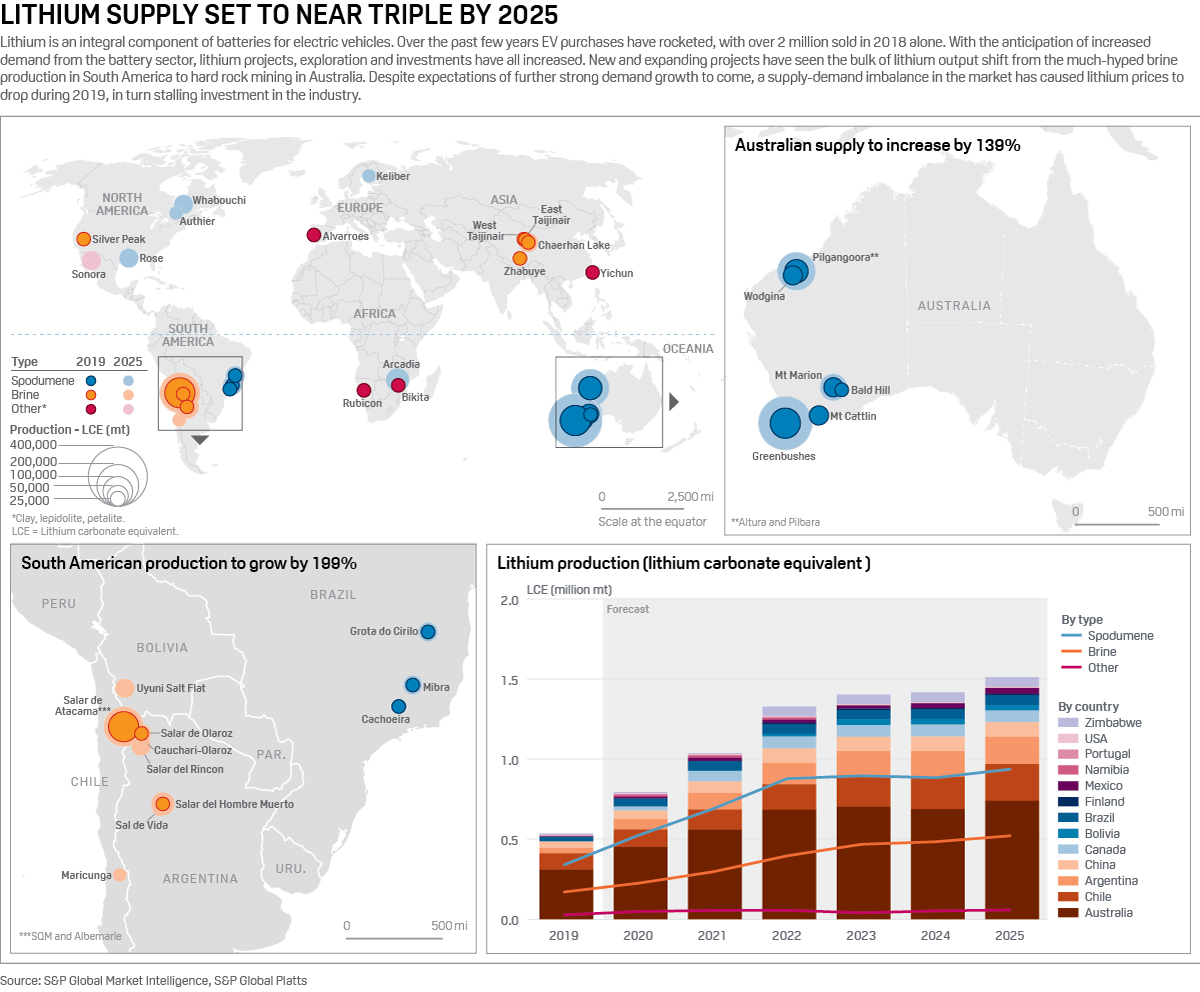 Lithium hydroxide, favored for newer cathode technologies, specifically higher nickel chemistries, can be produced from either spodumene or brine. When starting with brine, an extra conversion step from lithium carbonate is required. Hydroxide is typically priced at a premium to reflect this, although this margin has been coming under pressure as production straight from spodumene has increased.

New mines and increased production have brought a glut of material to market, hammering lithium prices. The S&P Global Platts assessment for lithium spodumene concentrate with 6% lithium oxide content (SC6) has fallen from $640/mt FOB Australia in January 2019 to $545/mt in September 2019.

The abundance of spodumene supply and subsequent low price has drawn down input costs for Chinese converters, seeing the Platts lithium carbonate CIF North Asia assessment fall 22% over the same period to sit at $9,900/mt October 17.

“There seems to have been a short-term build-up of lithium raw material during 2019 which has fed through into short term lithium pricing (and lithium company share prices).” Asa Bridle, of lithium developer Savannah Resources told Platts.

Bridle also argued that the present spodumene oversupply was due to delays in downstream conversion capacity coming online in China, “The key is to recognize this as a short-term imbalance in the market and not necessarily an indication of longer term trends.”

Vincent Ledoux Pedailles of Infinity Lithium took a similar view, citing expectations that the present oversupply would last until 2020 before balancing the year after. “Spodumene is exported to China mostly to third party converters where the conversion into lithium chemicals is inefficient.” He added that miners were looking at integrating conversion capacity to “better control their value chain and improve their margins.”

It is also worth noting that the supply/demand imbalance has been exacerbated by slower than projected electric vehicle sales in 2019, due in part to Chinese subsidy cuts in July, but also to a broader downturn in global automotive sales.

When talking about an oversupply of lithium, Bacanora Lithium CEO Peter Secker pointed out that it is important to distinguish between the lower-grade hard rock material coming out of Australia that requires additional processing and carbon footprint, and the chemical grade material used in batteries.

“There’s a lot of low grade concentrate around but the battery grade material is pretty balanced. Generally speaking, Australian production is at the higher end of the cost curve, with South American at the lower end,” Secker added.

This has seen wider argument that Australian hard rock mining could find itself in the role of swing production, with projects coming on and offline as the price dictates. Meanwhile, brine projects with more favorable positions on the cost curve would be able to operate under all but the most extreme low prices.

Australia, presently the largest producing nation, is set to maintain its position, with existing mines (many of which came online in the last three years) steadily ramping up production, bringing over 400,000 mt LCE of new supply by 2025.

South America is also set to see supply growth of around 199%, new brine lakes are beginning production and most existing salars are expected to increase output. With longer lead times, the oncoming brine projects were probably in the same batch of funding as the hard rock mines that have come online in Australia since 2016.

With the Authier, Rose and Whabouchi mines set to come online before 2025, North America’s share of lithium supply is set to increase to over 5%, potentially allaying some fears around North America’s present minor role in the EV battery chain.

Europe, however, is expected to add only one new lithium source by 2025, marginally increasing its share of global supply. With potential for 25 battery gigafactories to be operational across the continent by 2025, Europe looks set to remain dependent on non-domestic raw material supply – even as the European Commission has thrown its weight behind developing the sector and ensuring security of raw material supply

Keeping up with EVs

Despite the present oversupply, and near threefold supply growth expected by 2025, there is a strong argument that further out, as momentum builds, demand could outweigh supply.

“If forecasts for EV penetration are to be believed – along with the billions of dollars car companies have sunk or will sink into EV development and production – then lithium demand is set to increase 10-fold over the next decade.” Bridle said.

He added that, given the reliance of cathode and battery producers on lithium supply, there was strong incentive for supply investment from downstream users. “The lithium sector has provided some good examples of this trend already with lithium chemicals companies, battery companies and even car companies investing or partnering with raw material suppliers/miners.”

Pedailles also stressed the need for greater investment into raw materials, “If low prices remain in the short- to medium- term, it will lead to a reduced investment pipeline. This in turn will lead to an even more dramatic undersupply situation down the line and much higher prices.”

Success during present low prices would align to producer size, Bacanora’s Secker said, stressing that large investments were still flowing into the lithium supply chain from established majors. He also argued that companies with partnerships or joint ventures would be more resilient.

“The junior companies who want to develop projects alone will struggle,” Secker said.