UnionPay users are the most likely to be younger, more affluent and have higher education, most likely due to UnionPay's roots as a card payment provider.

Tmall, Taobao and Jingdong Mall are the most popular e-commerce platforms.

Mobile payments have become popular in China for various reasons, including lack of access to traditional financial institutions, the prevalence of counterfeit banknotes and a mobile-first culture. China's transition to a cashless society is being helped by the popularity of mobile payment systems such as Tencent Holdings Ltd.'s WeChat Pay, Ant Financial's Alipay and China Unionpay Co. Ltd. Kagan's 2019 China online consumer survey revealed that UnionPay users stand apart from WeChat Pay and Alipay users, most likely due to UnionPay's roots as a card payment provider.

Alipay started in February 2004 as a payment platform. WeChat Pay started later, in August 2013, but has gained equal footing with Alipay. A major ingredient in WeChat Pay's success was the digitalization of the traditional red envelopes during the 2014 Lunar New Year season, allowing people to send digital cash to each other.

WeChat Pay and Alipay essentially form a duopoly in China's mobile payments industry. Our survey revealed that 90% of adult internet users in China use WeChat Pay, while 94% use Alipay. There is much overlap for these two services, with 86% reporting that they use both.

We also asked about UnionPay's mobile payment system, which was reportedly used by 45% of our respondents. 43% of UnionPay users are also users of WeChat Pay, while 44% also use Alipay.

UnionPay is a debit and credit card provider that entered the mobile payments scene in May 2017. Its main advantage is its wide bank network, which means anyone with an account at any of its partner banks is already linked to its system. This, however, also means that banks are included in the equation when using UnionPay's mobile payment system, unlike WeChat Pay and Alipay, where payments are directly transferred from users to merchants, bypassing banks.

The bulk of mobile payment users in our survey came from cities with populations above 1 million. For all three providers, young adults aged 18-29 form the largest group. WeChat and Alipay have higher proportions of users above 60 compared to UnionPay. In contrast, UnionPay had the highest proportion of users holding bachelor's and master's degrees.

The total monthly household income distribution for WeChat Pay and Alipay are essentially the same, but UnionPay's distribution is slightly skewed to the more expensive end. This means that UnionPay's user base has a greater share of affluent users compared to the two mobile payment giants, which is possibly underpinned by its large share of young and highly educated users.

For all three providers, users who prioritize affordability and good user feedback before buying new technology constitute the largest group. UnionPay, however, had the largest proportion of early adopters, at 26%. 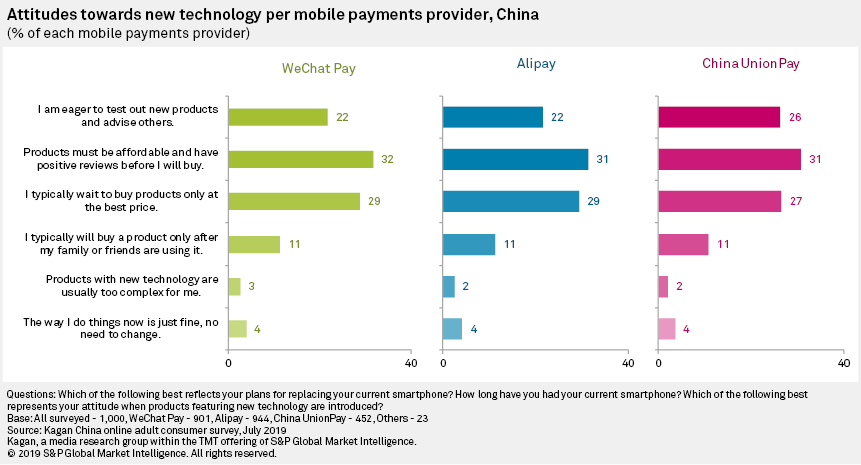 UnionPay users have the highest engagement for all smartphone activities that we surveyed, most notably using the smartphone app for mobile payment at a physical retail store and purchasing physical goods online.

Data presented in this article was collected from Kagan's 2019 Asia Consumer Insights survey. The online survey consisted of 1,000 adult internet users in China and was completed during July 2019. Data from the survey has a margin of error of +/-3 ppts at the 95% confidence level. Percentages are rounded up to the nearest whole number.