The U.S. Bureau of Ocean Energy Management is set to hold the first offshore wind auction along the Pacific Coast on Dec. 6. The sale includes five lease areas in two wind energy areas capable of accommodating between 4.5 GW and 8 GW of wind energy in waters over 800 meters deep and is expected to establish what will likely be the first floating offshore wind farms in the U.S.

Capping an active year for US offshore wind

At 10 a.m. ET on Dec. 6, the Bureau of Ocean Energy Management, or BOEM, will begin accepting bids for five offshore wind lease areas off the coast of California. The auction will cover two wind energy areas, or WEAs, — Morro Bay and Humboldt — totaling 373,268 acres. The Humboldt WEA is along the northern California coast near Eureka and includes two lease areas: OCS-P 0561 and OCS-P 0562. Farther south is the Morro Bay WEA, which is split into three lease areas: OCS-P 0563, OCS-P 0564 and OCS-P 0565.

The auction comes on the heels of California's recent announcement in which the state set a goal of procuring 25 GW of offshore wind by 2045, by far the most aggressive offshore wind capacity target in the country. This sale alone could get California a third of the way to this target, should the high-end capacity projections — between 1,490 MW and 1,905 MW per lease area — from the National Renewable Energy Laboratory prove accurate. The BOEM estimated the sale could net roughly 4.5 GW of wind power using the more conservative projection of 3 MW per square kilometer, which leads to a range of 769 MW to 976 MW per lease area.

The Carolina Long Bay auction paled in comparison to the jaw-dropping bids that came out of the New York Bight auction Feb. 25. Six lease areas were sold for a total of $4.37 billion with winning bids ranging from $285 million to $1.1 billion.

BOEM auctions date back to 2013 with two lease areas near Rhode Island and Massachusetts selling for a combined $3.84 million to Deepwater Wind New England LLC, which was acquired by offshore wind veteran Ørsted A/S in 2019. Three lease areas off the coast of Massachusetts were sold in March 2015, which spawned the 2,000-MW Bay State Offshore Wind project, the 1,600-MW Vineyard Offshore Wind Project, the 1,232-MW Commonwealth Offshore Wind Project and the 804-MW New England Wind (Park City Wind Offshore) project. Bay State is a joint venture of Eversource Energy and Ørsted, while the other three projects are backed by parent company Avangrid Inc. 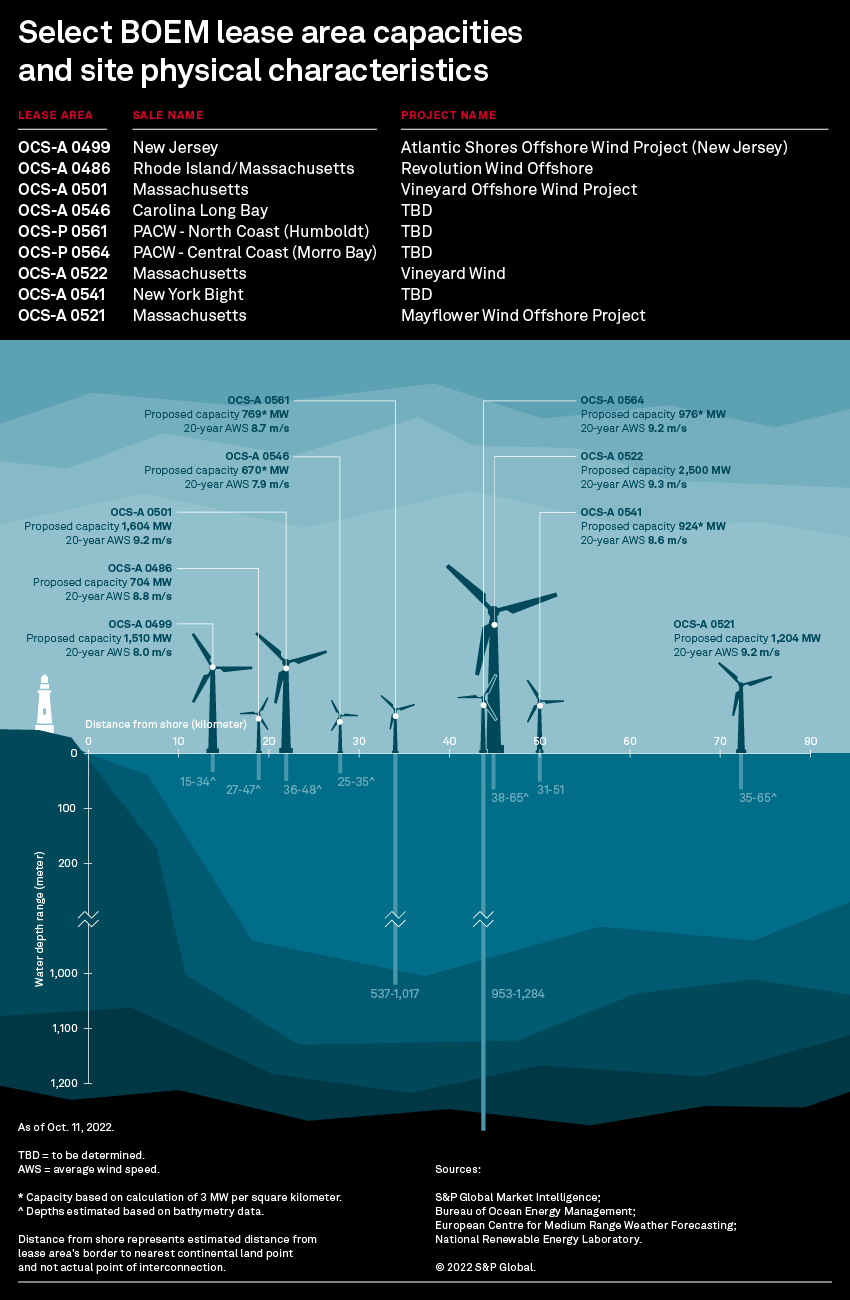 Subsequent auctions sold offshore wind lease areas in New Jersey in 2016, North Carolina in 2017 and Massachusetts in 2019. The 14 lease areas the BOEM auctioned off along the East Coast have announced projects with capacities totaling over 24 GW. This does not include the New York Bight and Carolina Long Bay auctions, which have yet to announce specific project development plans.

On Oct. 31, the BOEM finalized two more WEAs in the Gulf of Mexico. The two areas off the coast of Texas and Louisiana total 682,540 acres, nearly double the combined size of the California WEAs. The auction is expected to take place in 2023.

The five lease areas in the upcoming sale range between 63,338 acres and 80,418 acres. All five are larger than the two 55,000-acre Carolina Long Bay areas and are comparable in size to most New York Bight areas. The exception is the 126,000-acre OCS-A 0539, which was awarded to National Grid PLC- and RWE AG-backed Bight Wind Holdings LLC with a $1.1 billion bid.

These five areas can accommodate offshore wind capacities between 830 MW and 980 MW in the Humboldt WEA and about 980 MW in each of the three Morro Bay WEAs, according to the BOEM. However, according to analysis from the National Renewable Energy Laboratory, these lease areas are theoretically capable of producing much higher capacity. Depending on project layout, foundation type and rated capacity of the wind turbines, the Morro Bay lease areas can potentially hold between 1,600 MW and 1,850 MW and the Humboldt areas could hold between 1,450 MW and and 1,600 MW.

In terms of distance to shore, both WEAs are about 32 kilometers-34 kilometers from the nearest land point, right in median range of their counterparts off the East Coast. Offshore projects have a fine line to walk in terms of distance to shore. A project too close to shore could face stiff resistance from local residents and authorities over concerns of disrupting ocean views. The farther a project is from shore, the greater the costs are for construction and interconnection. Helping to partially offset these higher costs are average wind speeds that tend to be higher farther from shore. 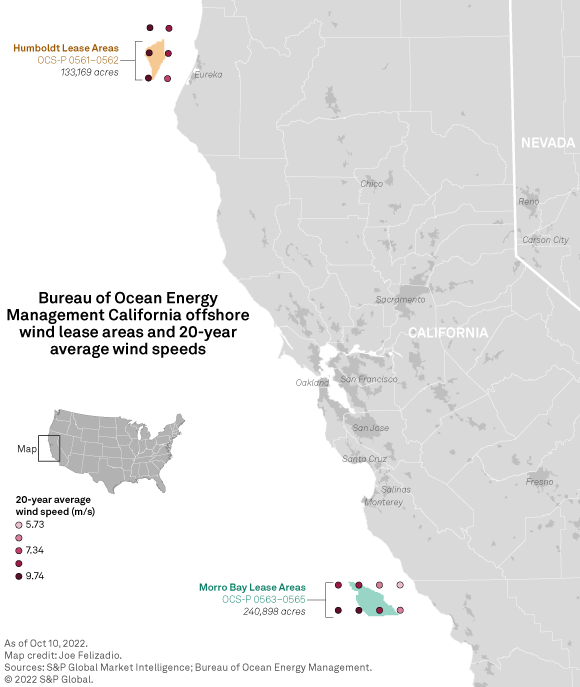 By far, the biggest physical consideration for these areas is the ocean depth. The Morro Bay and Humboldt WEAs are in deep waters. Grounded foundations generally cannot be utilized in waters deeper than 60 meters; thus the California BOEM auction is known to be intended for floating foundation projects. Offshore wind projects in these lease areas will contend with some of the deepest water depths of any offshore projects now in development worldwide. The Hywind Tampen Offshore Vindpark under construction off the coast of Norway has water depths of up to 300 meters, the deepest known offshore wind project in advanced development in Europe. By contrast, the shallowest point in the California WEAs, located in lease area OCS-P 0561, is over 530 meters deep, and many lease areas have depths greater than 1,000 meters.

Floating foundations are more expensive and are not yet fully commercialized. Current levelized cost of energy estimates for floating offshore wind farms are close to $200/MWh, compared to $84/MWh for fixed-bottom foundations, according to the U.S. Energy Department. Costs for floating foundations are projected to fall substantially over the next decade as technologies mature and construction variables are better understood. In September, the Biden administration and the Energy Department announced the "Wind Shot" initiative, with goals of installing 15 GW of floating offshore wind by 2035 and driving down costs of floating wind farms by more than 70%. As part of the effort, nearly $50 million of research funding will be dedicated to floating offshore wind technologies.

That said, rising costs of wind energy due to supply chain and material constraints will counter these expected cost decreases, at least in the near term. This, combined with the uncertainty of building in such deep waters, may suppress bidding prices in the upcoming auction. Notably, Avangrid requested that the contract for the 1,232-MW Commonwealth Offshore Wind Project be renegotiated as rising costs have caused the current contracts to no longer be financially viable.

Only a small handful of floating foundation offshore wind farms are in operation around the globe. In 2021, the 50-MW Kincardine Floating Wind Plant (Offshore) in Scotland was fully commissioned, becoming the largest floating foundation project in the world — a title previously held by the 30-MW Buchan Deep Offshore Wind Farm (Hywind) in Scotland. The only other operating commercial offshore wind farm that uses floating foundations is the Parque Eólico Offshore WindFloat Atlantic wind farm off the coast of Portugal, with a capacity of 25 MW. The pipeline for planned floating offshore projects remains limited compared to grounded projects, but activity is increasing as floating technologies slowly mature.

Speculation on bidding in the upcoming auction is well beyond the scope of this report, but the enticing wind speeds and strong state-level support for offshore wind should foster robust competition among prospective bidders. That said, deep waters and rising costs around the industry are also expected to keep those bids in check. The BOEM has determined that 43 entities are "legally, technically and financially qualified" to participate in the auction. Included in those entities are parent companies Ørsted, RWE Renewables Development LLC, Shell PLC, Avangrid, EDF Renewables Inc. and Invenergy LLC.

Also among the qualified bidders is TotalEnergies, which has taken over EnBW North America Inc.'s share of the proposed 1,000-MW Morro Bay Offshore Wind Project (Castle Wind Offshore) in the Morro Bay WEA. TotalEnergies Renewables won lease areas in the New York Bight and Carolina Long Bay auctions and is expected to be an active participant in the California auction.

Joe Felizadio and Kristin Larson contributed to this article.

Energy and Datacenters: Implications of new Regulations with a spotlight on Northern Virginia