The Future Of Demand For Battery Metals, EVs, Power Storage

Risks in the cobalt supply chain continue to encourage development in battery technology.

Other battery technologies remain in the wings or in development.

Many questions have been raised about whether material supply restrictions will affect the future supply and demand of EVs.

Jan. 23 2019 — Battery technology has progressed significantly in the last two decades due to the growing power demands of modern portable consumer electronics and the increasing adoption of renewable but variable power generation. In the last three years, rising metal demands for electric vehicles have made supply constraints a significant concern. The Chinese government policy of focusing interest on electric vehicles with longer ranges has also encouraged adoption of specific battery types, which drove metal demand.

While much of the focus on battery metal demand recently has been on EVs, growth in battery technology also must include domestic, industrial and grid power storage. Despite the decision by the U.S. to withdraw from the Paris agreement on climate change, adoption of renewable energy sources has continued, some of which may not provide consistent power supply when needed, making batteries ideal for frequency stabilization. Indeed, a risk to the long-term supply outlook for cobalt is in assumptions about recycling rates as EV battery modules are repurposed for domestic or industrial power storage rather than recycled when they reach the end of their useful life in EV applications.

Risks in the cobalt supply chain continue to encourage development in battery technology. Nickel-manganese-cobalt, or NMC, batteries have seen a number of developments since their adoption. Reducing the cobalt content has been a long-running feature of this development, from the equal proportions of the earlier NMC111 battery to the current NMC532 — five parts nickel, three parts manganese, two parts cobalt — reducing the cobalt and manganese content in favor of nickel. Now the NMC811 battery is in the process of being commercially deployed. This evolution of battery design has led to an increase in battery capacity and consequently to a general increase in vehicle range, enabling Chinese consumers to take advantage of updated government incentives. Challenges, however, include reduced voltage and decreased stability. The nickel-cobalt-aluminum batteries used in Tesla Inc. vehicles also feature a reduced cobalt content, which Elon Musk has highlighted in response to concerns about cobalt-sourcing risks. 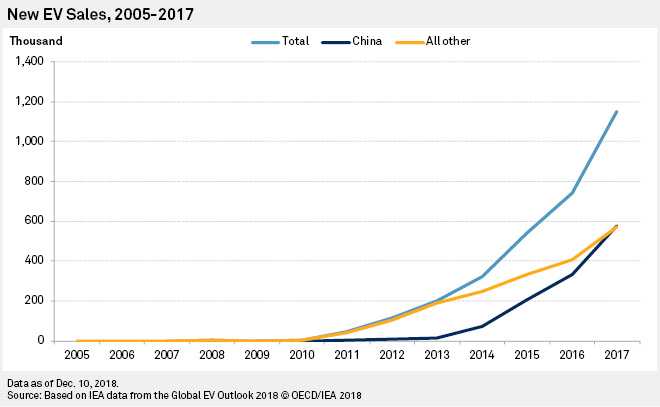 Other battery technologies remain in the wings or in development. These include lithium titanate, or LTO, batteries. Battery technology is frequently discussed in terms of the nickel, cobalt or other metal content of the cathode. LTO batteries differ from other lithium-ion batteries in that lithium titanate is used to coat the anode in place of graphite. LTO batteries have displayed significantly higher cycle lives and very rapid charging in addition to being more suitable for low-temperature environments. LTO batteries, however, compare unfavorably to NMC batteries in their energy density and voltage output, which may limit their attractiveness for more widespread application in EVs.

Lithium-iron-phosphate, or LFP, batteries were an early leader for use in EVs. More recently, NMC batteries became the preferred option as Chinese new energy vehicle credits have, from 2018, favored new vehicles that use batteries with higher energy densities and vehicle ranges. Going forward, LFP batteries may be combined with LTO battery features to provide an ideal battery for certain uses.

LMO batteries featuring lithium manganese oxide have been a mainstay of the EV industry for a number of years. LMO batteries are rarely used in isolation anymore but instead are used in combination with NMC battery technology. This allows automakers to take advantage of the best features of both; however, the resulting cars still do not have the driving range exhibited by nickel-cobalt-aluminum- or NCA-battery EVs.

NMC batteries, decommissioned from vehicular use, are finding a second life as domestic or commercial stationary energy storage. However, as such batteries have safety risks associated with them, some jurisdictions have placed safety restrictions on their placement. On a larger scale, Tesla has demonstrated the grid-scale use of lithium-ion batteries in the much-lauded Hornsdale Power Reserve. This has an output of 100 MW and an energy storage capacity of 129 MWh and was built to support the South Australian power grid, which was suffering repeated failures, affecting both business and domestic consumers. 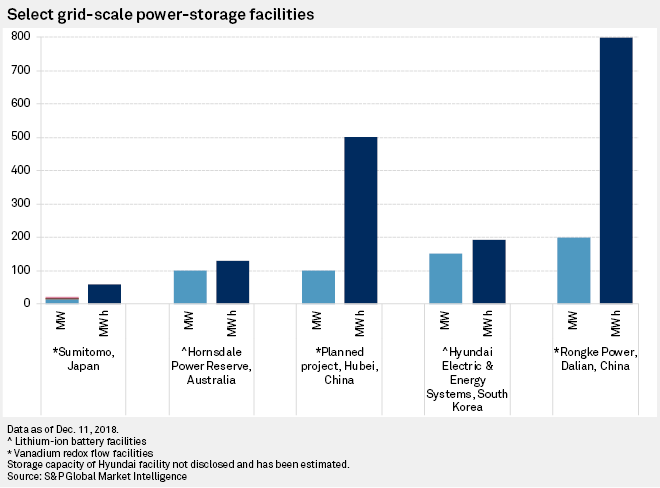 In contrast, the Rongke Power battery now being built outside Dalian, China, will be a 200-MW/800-MWh plant. This is a vanadium redox flow battery, or VRFB, which will be used for grid frequency stability and peak shaving. The energy storage capacity of VRFBs is bound only by the amount of electrolyte stored. As the electrolyte in a VRFB is not flammable, it is safer for large-scale energy storage solutions. The battery system has an extremely long life in comparison to other battery types, and there is significant value retained in the electrolyte after use as it can be reused. These batteries are ideal as they can be easily scaled up; however, they are not yet suitable for smaller commercial or residential use and are unlikely to be used in vehicles in the future.

Many questions have been raised about whether material supply restrictions will affect the future supply and demand of EVs. The increasing cobalt supply in coming years — with an expected 12% CAGR to 2021 — the ability and plans for capacity and production increases from both hard-rock and brine lithium sources and the relatively small effect of battery demand on the overall nickel market indicate that supply constraints will be manageable in the short term.

Longer term, a variety of battery technologies are available and perhaps suitable for different use applications, e.g., public transport versus consumer vehicles, large commercial vehicles versus two-wheelers, or consumer electronics versus grid-scale energy storage. The variability of battery technology allows manufacturers to select the battery designs that best suit their product, meaning there may not be a one-fits-all battery type of the future. Product designers will base their decisions on the cost, life, power density and charging times of the battery units. While supply risk management and technology performance will be issues that miners and end-use manufacturers will have to navigate, these need not halt further development and adoption of mobile or static energy storage solutions.

Watch: Global Mining Industry Outlook - What Are the Expectations?

Explorers Spent More Than Budgeted In 2017