Pandemic pushes customers out of branches, banks ramp up closures


Pandemic pushes customers out of branches, banks ramp up closures

This is the second in a series of articles covering the results of S&P Global Market Intelligence's annual Mobile Banking Survey.

The pandemic has dampened branch visitation over the past year and already sparked long-term reallocations of capital as banks have accelerated branch closures.

One year after the pandemic began, over half of respondents to S&P Global Market Intelligence's annual Mobile Banking Consumer survey reported visiting branches less frequently, and several expressed concerns regarding the safety of branch visits. As the pandemic has persisted for over a year and influenced all aspects of consumer behavior, the likelihood that new branch-related behavior will become entrenched remains high.

Customers may start to explore returning, tentatively, to their pre-pandemic routines as vaccination rates climb and COVID-related guidelines and restrictions are relaxed. But banks have already responded to the shifts in consumer preferences by slashing their physical footprints at an accelerated rate.

Closing branches tends to reduce costs for banks. A portion of those savings is expected to be diverted into digital investments in response to the customer rotation toward digital channels and the success many banks have enjoyed in using digital channels to effectively gather deposits. 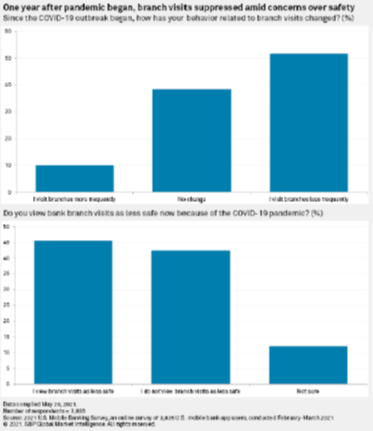 Commentary from banks and industry experts over the past year have corroborated the idea that pandemic fears are driving down branch traffic; survey data suggests that these safety concerns and behavior changes have affected roughly half of respondents. Nearly 52% of respondents to S&P Globals's 2021 Mobile Banking Survey, fielded in February and March of this year, indicated that they were visiting branches less frequently since the pandemic began, down from 58% of consumers in last year's survey, fielded in June and July 2020. The split between customers who view branch visits as less safe and those who do not is roughly even.

Customers are replacing some of these foregone branch services with digital substitutes. Approximately one-third of respondents indicated that their decreased branch utilization coincided with increased usage of their bank mobile apps, highlighting a significant rotation toward digital banking. As they lean more heavily on digital services, these customers are discovering new features for the first time, several of which may serve as viable long-term replacements for branch services.

Features like photo-check deposit and peer-to-peer money transfers could serve as a replacement for some activities customers usually performed at branches. Over 36% of survey respondents indicated that they had visited a branch at least once in the 30 days prior to responding to the survey. Among them, the most popular services sought were deposits, withdrawals and ATM use. These types of commonly sought out branch facilities can often be substituted by digital features. 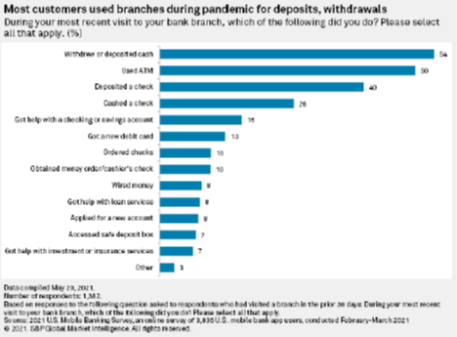 We have argued that the discovery of digital utilities like photo-check deposit and peer-to-peer transfers by more than 20% of survey respondents will likely contribute to the stickiness of new consumer behavior developed during the pandemic. Consumers seem to be anticipating something similar; approximately 64% of respondents who indicated they were visiting branches less frequently since the pandemic began also anticipate continuing or further decreasing their current levels of branch utilization after the pandemic officially ends. 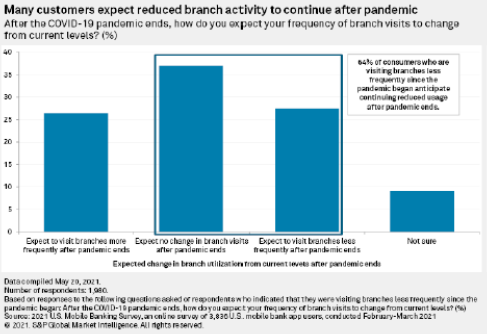 The banking industry aggressively slashed its branch footprint in 2020. Banks have regularly closed more branches than they have opened over the last decade, but the pace of closures slowed in 2018 and then declined again in 2019. But the pandemic has changed how customers and banks view branches as digital adoption grew and deposits flooded into the financial system. Last year, the country saw the highest level of net branch closures since at least 2010. The cuts were driven, in part, by a search for efficiency as high deposit growth and low loan growth left banks with excess liquidity and depressed margins. But they also speak to a growing appreciation among banks of the potential for digital channels to alleviate the need for branch density and a growing proclivity among consumers to rely on those platforms for convenience.

Between January 2020 and April 2021, U.S. Bancorp closed more branches than any other U.S. bank. The company doubled the branch closure plan it had announced in 2019 due to COVID-19, claiming that it needs fewer branches now than it did even a few years ago. JPMorgan Chase & Co. also thinned out its network since January 2020; its 334 facility closures represent the fourth-most of any bank in the U.S. However, the company also expanded the scope of its footprint by 222 new branches in the same time period. The bank will have a presence in all of the lower 48 states by the end of July this year.

Banks have been undergoing a process of optimizing branch efficiency for several years. Median deposits per branch figures increased by double-digit percentage points across all asset buckets between 2015 and 2020; collecting deposits are seen as one of the main functions of bank branches. These efficiencies have been achieved through a combination of branch closures, M&A activity and digital investments.

Banks that invested in digital-only banks, like Midland Financial Co. and Capital One Financial Corp., saw some of the largest increases in deposits per branch since 2018. A large swathe of retail customers have indicated that they are open to banking with digital-only banks, though only a minority have actually opened accounts at such banks, according to survey data. Just over 8% of survey respondents already have an account with a digital bank but nearly 44% say they are likely to open an account with a digital bank. Should that openness continue to translate to new business, we may see incumbents invest more heavily in digital deposit gathering strategies in the ongoing search for greater efficiencies in their business model.

Results have a margin of error of +/- 1.6 ppts. at the 95% confidence level. Survey results presented for the entire U.S. are weighted by age and census region population to be nationally representative.

Mahum Tofiq contributed to this article.