China’s super apps are built upon payment systems and mini-programs. 87% of respondents reported using super apps to do mobile payments, while 78% said they booked miscellaneous services through mini-programs in super apps.

Chinese consumers use super apps such as WeChat and Tiktok less for social media and more for mobile payments and various service bookings, according to Kagan's 2020 Asia Consumer Insights survey.

WeChat and Tiktok are among a growing roster of mobile apps in China and the rest of Asia-Pacific that brand themselves as "super apps." While there is no widely agreed-upon definition of what a super app is, we define it as a single app that allows users to do multiple, often seemingly unrelated functions without leaving the app.

Click here for a discussion on super apps in China and the rest of Asia-Pacific.

We asked 1,000 Chinese adult internet users about eight popular super apps in our survey in June. At the top of the list were Tencent Holdings Ltd.'s WeChat (reportedly used by 97% of respondents) and Ant Group Co. Ltd.'s Alipay (95%). Although WeChat started as a messaging app, its in-app payment platform WeChat Pay is a direct competitor to Alipay, which is essentially a payment app. 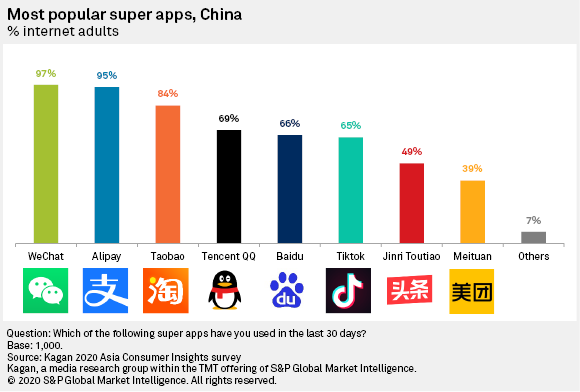 Among the eight super apps we studied, Alipay was the only one to initially start as a payment platform. Alibaba originally created Alipay as the proprietary payment system for Taobao in October 2003 until it was spun off as a separate service through its affiliate Ant Group in February 2004.

Tencent ventured into the payments scene in August 2013 with the launch of WeChat Pay. Similar to Ant Financial, having its own payment system allowed Tencent to ink partnerships with various companies to accelerate market adoption of its app. Although other companies have also launched their own digital wallets and payment platforms, WeChat Pay and Alipay dominate China's mobile payments scene.

WeChat, however, started truly becoming the super app it is today in January 2017 when Tencent introduced mini-programs. These "apps within an app" can be launched from WeChat's own app drawer, allowing users to access third-party services without leaving WeChat or even downloading separate apps. By allowing third-party companies to create their own mini-programs, Tencent was able to rapidly scale up the use cases of its app without directly venturing into other lines of business.

Tencent's strategy of combining mobile payment with mini-programs to "lock" users within the app while generating additional revenue streams became the standard playbook for other companies aspiring to launch their own super apps. Ant Group quickly adopted mini-programs in Alipay in August 2018 and so did Baidu in July 2018.

The top activities in super apps that emerged in our survey support our argument about the key role of mobile payments and mini-programs in the success of Chinese super apps.

An overwhelming 87% of respondents reported using super apps to do mobile payments, while 78% said they booked miscellaneous services through super apps. Services such as grooming, pet walking and medical appointments are mostly booked through mini-programs, so this activity can be a proxy for the use of third-party mini-apps.

These figures are greater than those for activities related to the main services of the eight super apps we surveyed, such as social media (65%), video streaming (62%), messaging (60%) and online shopping (50%). For instance, only 61% and 66% of WeChat users reported using the app for messaging and social media, respectively, but 89% reported using WeChat for mobile payments. Even for Tiktok users, 92% reported doing mobile payments versus only 74% for social media and 71% for video streaming.

Peer-to-peer mobile money transfer among super app users was also prominent among all respondents (58%). Other financial activities such as purchasing insurance (11%) and loan applications (4%) were less popular.

One interesting use case that popped up in our survey was electronic identification (66%). Since Chinese law requires users to register with some of these platforms using a national ID, their super app accounts can act as proxy electronic IDs. The Chinese government took advantage of this during the COVID-19 pandemic when it required the use of health-based color-coded WeChat QR codes to control the movement of people. 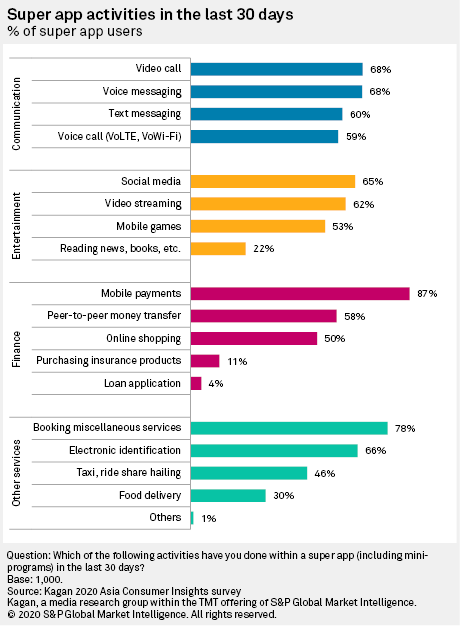 Super app activities appeared to vary depending on the number of super apps used. On average, Chinese consumers used 5.71 super apps with a standard deviation of 0.31. The distribution of the number of super apps used by our respondents is negatively skewed, which means that people are more likely to use more super apps that just a few. Respondents who used only one or two super apps in our list reported higher activity rates for basic communication and entertainment services: calls, text and video. Mobile payment was the top activity for users of three or more super apps.

The mean age of all super app users was around 42.49 years with a standard deviation of 14.20 years. Segmenting the respondents into age groups revealed that Tencent QQ had the highest proportion of users aged 18 to 29 years (29%), which explains why its mean age of 40.74 years was the lowest among the eight super apps. In contrast, Jinri Toutiao had fewer users in the same age cohort (18%) but more in the older age brackets, pushing its mean age to become the highest at 44.61 years.

Data presented in this article was collected from the Kagan 2020 Consumer Insights survey in China. The online survey consisted of 1,000 adult internet users and was completed during second-quarter 2020. Data from the survey has a margin of error of +/- 3 ppts at the 95% confidence level. Percentages are rounded up to the nearest whole number.

To submit direct feedback/suggestions on the questions presented here, please use the "feedback" button located above, directly under the title of this article. Note that while all submissions will be reviewed and every attempt will be made to provide pertinent data, Kagan is unable to guarantee inclusion of specific questions in future surveys.

Bank Disruptors Doubling Down On Mobile Payments In China