Fintech
Insurtech Startup Root Is Growing Like A Weed

It would be difficult for Root Inc. to repeat the explosive premium growth it experienced in 2018, especially after a fourthquarter spike in claims, but we expect the insurtech startup to have another strong showing in 2019, given a number of key steps it has taken to bolster its operations.

Root Inc.'s underwriting subsidiary, Root Insurance Co., offers personal auto policies that rely on telematics data, similar to Progressive Corp.'s Snapshot. While telematics was not a new concept when Root Inc. started — Snapshot goes back to at least 2008, when it was known as MyRate — one of the characteristics that set the insurtech startup apart was that its telematics system relied exclusively on the driver's smartphone. Prior to that, many insurers used (and some still do) a device that plugs into the on-board diagnostic port of the vehicle. For example, mobile telematics and analytics company Cambridge Mobile Telematics Inc. touts its head start in developing smartphone-based systems as a key competitive advantage.

In terms of premiums written, Root Insurance began in relatively modest fashion. From July 2016, when it started writing, through the first quarter of 2017, Root Insurance wrote exclusively in its home state of Ohio and generated less than $150,000 in direct premium. It continued to add states and grow premiums in the three quarters after that, but still at a measured pace. The next year, however, was a completely different story. Root Insurance went from writing only $4 million in direct premium in 2017 to $106.4 million in 2018, including a 55% sequential increase in the fourth quarter of 2018. Texas and Kentucky were the main drivers of Root's growth in direct premiums written in the fourth quarter of 2018, accounting for 22.3% and 15.5%, respectively, of the total $18 million increase. 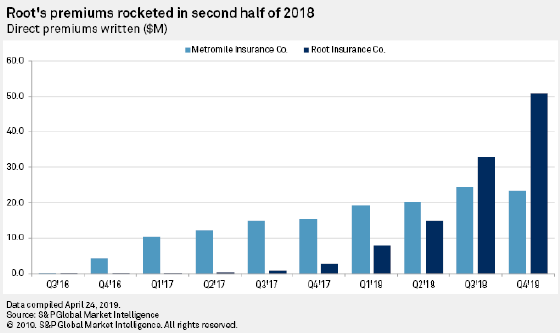 All told, Root Insurance was the third-fastest-growing auto insurer in the U.S. in 2018, by direct premiums written, based on companies that have filed statutory statements.

Notably, Root Insurance's premiums in the third and fourth quarters of 2018 surpassed Metromile Insurance Co., the underwriting unit of Metromile Inc., a fellow insurtech startup that writes its own policies and has likewise been growing at a rapid clip. In terms of strategy, Metromile Inc. takes a slightly different approach than Root Inc., using telematics devices to measure miles driven but not driving behavior. Metromile Insurance and Root Insurance are both still relatively small players in the overall personal auto insurance market. The group of companies led by State Farm Mutual Automobile Insurance Co., the nation's leading personal auto insurer, wrote about $42 billion in premiums in 2018, and the U.S. market as a whole is roughly $246 billion in size.

One potentially troubling sign for Root Insurance was a spike in claim volume from the fourth quarter of 2018 through the middle of January 2019. But Root Insurance appears to have addressed it. During this period, Root Insurance said it slowed new business growth and state expansion efforts, and brought its claims function in-house, which resulted in lower claim severity amounts and more timely settlement. Root Insurance's loss and loss adjustment expense ratio appears to reflect these actions, shrinking from more than 120% in the second and third quarters of 2018 to 97% in the fourth quarter of 2018.

Despite this headwind, Root Insurance appears to still have ambitious expansion plans. It added two more states — Georgia and Colorado — in the first quarter of 2019, and its website lists nine states and Washington, D.C., as where it "will be soon." One of those states, California, is a massive market with roughly $30 billion in direct premiums written in 2018. In a rate filing submitted in October 2018, Root Insurance projected $4.3 million in projected annual premium from California, which might be on the conservative side given the market share gains it was able to make in Texas.

Root Insurance has also been ceding less business to reinsurers, lowering its quota share reinsurance contract June 1, 2018, to 25% from 50%. All things equal, this will translate to higher levels of net premiums written and net premiums earned for the length of the contract. Metromile Insurance has gone the opposite direction, ceding even more business over time. Horseshoe Re Ltd. assumes the majority of Metromile Insurance's direct premiums, based on statutory disclosures. 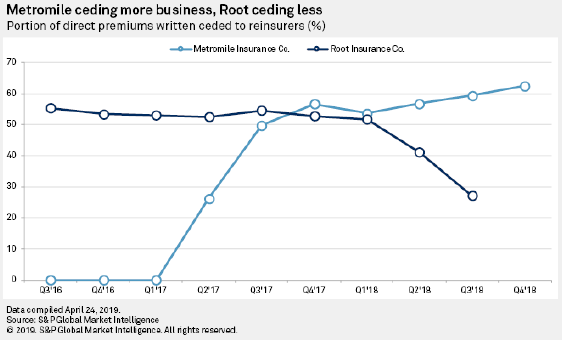 Root Insurance has yet to report a quarterly profit, and its net loss widened to $58.3 million in 2018 from a loss of $15.6 million in 2017. But the company is taking steps to improve profitability. One is through rate actions. It gained approval for rate increases in over a dozen states in 2018, including a 47.8% increase in Illinois on $3.4 million of premium, which would imply a $1.6 million influx for Root Insurance. It has managed to secure a few rate actions in 2019 as well, with Texas granting a 34.3% hike and Delaware approving a 20.3% jump. The Texas rates are particularly noteworthy given the $4.4 million book of business.

Meanwhile, Root Insurance's expense ratio has also been declining dramatically, falling from 95.7% in the third quarter of 2018 to 39.8% in the fourth quarter of 2018. To achieve this, Root Inc. set up Root Insurance Agency and created a producer agreement between it and Root Insurance. The agency provides advertising, marketing and customer support services, incurring costs directly, and receives a commission from Root Insurance based on direct premiums written. One of the benefits of this agreement, as Root Insurance indicates, is that it puts less pressure on the underwriting subsidiary to hold risk-based capital. This is a genuine concern, as a risk-based capital ratio of between 200% and 300% can be a potential red flag for regulators if the company's combined ratio is also above 120%. Root Insurance and Metromile Insurance both managed to keep their RBC ratios above 300% as of Dec. 31, 2018, and Root Insurance said it continually monitors its RBC levels to ensure that capital contributions are enough to stay above that threshold. 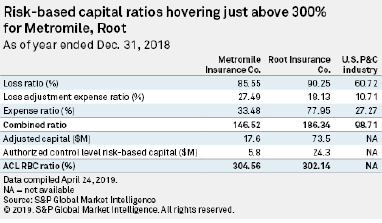 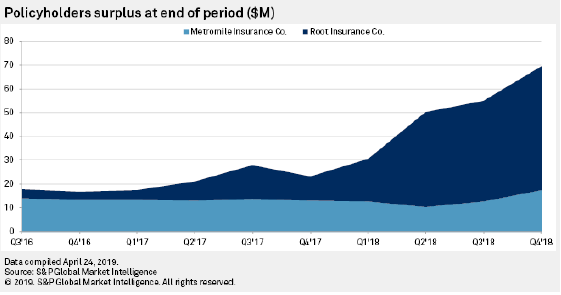 Root Insurance might also be able to beef up its bottom line through increased investment income. Whereas Root Insurance had previously invested in the safest U.S. investments — cash, cash equivalents and U.S. Treasury securities — it began to diversify a bit in 2018, investing in municipal bonds and even some corporate bonds. The strategy appears to be paying off, with Root Insurance's net yield on invested assets climbing to 1.6% in 2018 from 0.5% in the prior year. The company's net investment income was roughly $732,000 in 2018, up sharply from about $48,000 in 2017. But it bears noting that even with the improvement, Root Insurance's investment income only covers a tiny fraction of net underwriting losses: 1.2% in 2018 versus 0.3% in 2017.

Metromile remained completely invested in cash, agency and U.S. Treasury securities throughout 2018 and its net yield on invested assets was 1.1% for the year, up from 0.7% in 2017.

Like any startup, Root Inc. still faces a challenging road ahead in terms of building scale and reaching profitability. Incumbents already have telematics offerings and some, like State Farm and White Mountains Insurance Group Ltd., have backed whole new companies (HiRoad Assurance Co. and Noblr Inc., respectively) with similar business models. But Root Inc. appears to be adequately capitalized, its policies seem to be gaining traction and it has embarked on several strategic initiatives that should benefit the company in the future. Perhaps equally as important is the outlook for the U.S. personal auto insurance industry, which is showing encouraging signs. As a result, we think Root Inc. will continue to blossom.