S&P Global Market Intelligence's Pipeline Activity Index, or PAI, declined for a fourth consecutive month in July to a 20-month low, falling 16% to 109 from 130 in June. A small increase in positive project milestones did little to offset notable decreases in drill results, significant financings and initial resources. The gold PAI fell 17% to a 25-month low of 144 from 174 in June, and the base/other metals PAI fell by the same percentage to 60 from 96.

After spiking to US$1.10 billion in June, the total raised by junior and intermediate companies retreated 18% month over month to US$895 million in July, continuing a roller-coaster rate of monthly change in totals raised year-to-date. The number of financings also declined, by 7% to 174. 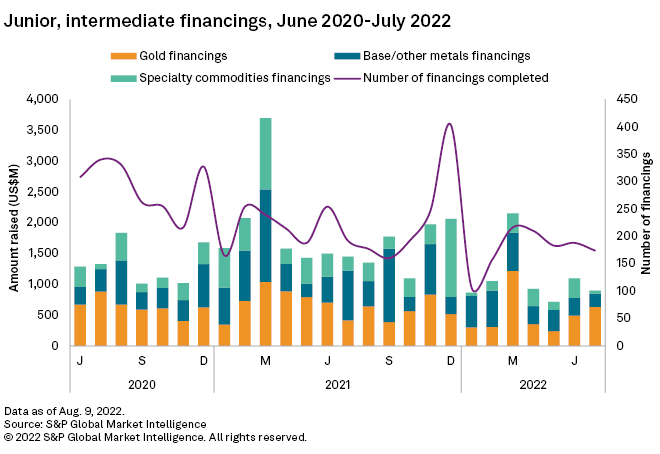 We use the numbers of significant financings — of at least US$2 million — in the PAI calculation. Only significant gold financings contributed to the PAI decline in July, falling to 34 from 45 in June, while significant base/other metals financings remained unchanged from June at 16. Specialty commodities financings fell the most, dropping 58% to five from 12.

July's largest gold financing and the largest overall was the C$195 million (US$150 million) follow-on offering by Toronto Stock Exchange-listed, Reno-based Argonaut Gold Inc. The company will use the net proceeds for construction of its Magino gold mine in Ontario and for general corporate purposes. Magino is projected to produce 142,000 ounces of gold per year over the first five years of a 19-year mine life at an all-in sustaining cost of US$963 per ounce. Preproduction capital costs are estimated at US$331.2 million.

The month's largest base/other metals financing and the fourth largest overall was the US$55 million offtake financing agreement between TSX-Venture-listed Adventus Mining Corp. and Singapore-based Trafigura Pte. Ltd. Adventus will use the funds for preconstruction activities at its Curipamba copper project in Ecuador, which is expected to begin production in 2024. In exchange for the funding, Trafigura received certain concentrate offtake rights for future production from the El Domo deposit over the life of the mine, along with equity in Adventus.

Detailed information on junior and intermediate financings completed in June is available in the Financings article in this series.

Global drilling activity retreated for a second consecutive month in July, with the number of projects reporting drill results falling to 330 from 376, after an all-time high of 421 projects in May. 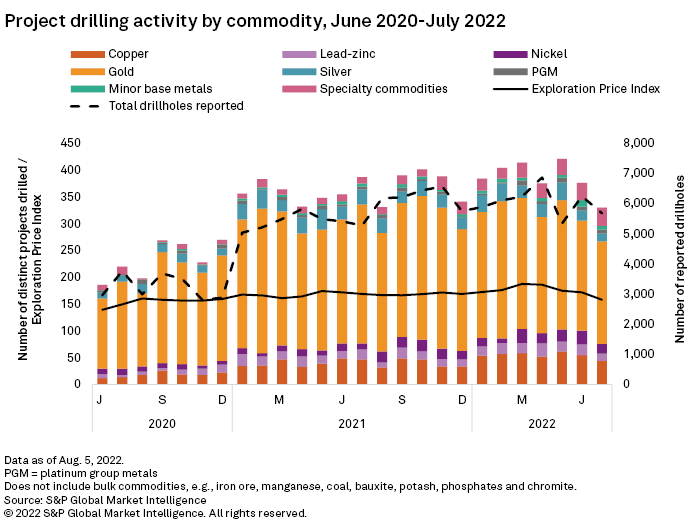 Reported drilling decreased for gold, silver, copper, nickel, lead-zinc and minor base metals projects. Platinum group metals remained at seven, month over month. Specialty commodities projects registered the only increase, bumping up to 34 from 32. The number of reported drillholes decreased relatively modestly in July compared with projects, to 5,679 holes from 6,243 in June.

Tesoro Gold Ltd. reported the most drillholes in July, with 469 at its El Zorro gold project in Chile. In May, the company announced upgraded resources of 1.1 million ounces of gold grading 1.12 grams per tonne of ore. Two diamond drill rigs began further drilling at the Ternera deposit in July. District target drilling is scheduled to begin in August upon completion of additional mapping and sampling programs.

By country, Australia led with 134 projects, an 8.9% increase over June. Projects drilling decreased in most other jurisdictions, with Canada dropping 31.5% to 63 projects — the least since November 2020 — and the U.S. falling 36.1% to 23 projects.

Reflecting the lower number of projects reporting assays, the number of significant drill intersections — used in the PAI calculation — fell in July to a 19-month low of 186 from 212 in the previous month, with the decrease led by base/other metals projects. Significant grassroots intersections fell, by far, the most compared with late-stage and minesite drilling.

Detailed information on all drilling activity in June is available in the Drill results article in this series.

The number of initial resource announcements halved in July, to four from eight in May; two resources were for gold projects and two were for base metals projects, nickel and zinc. 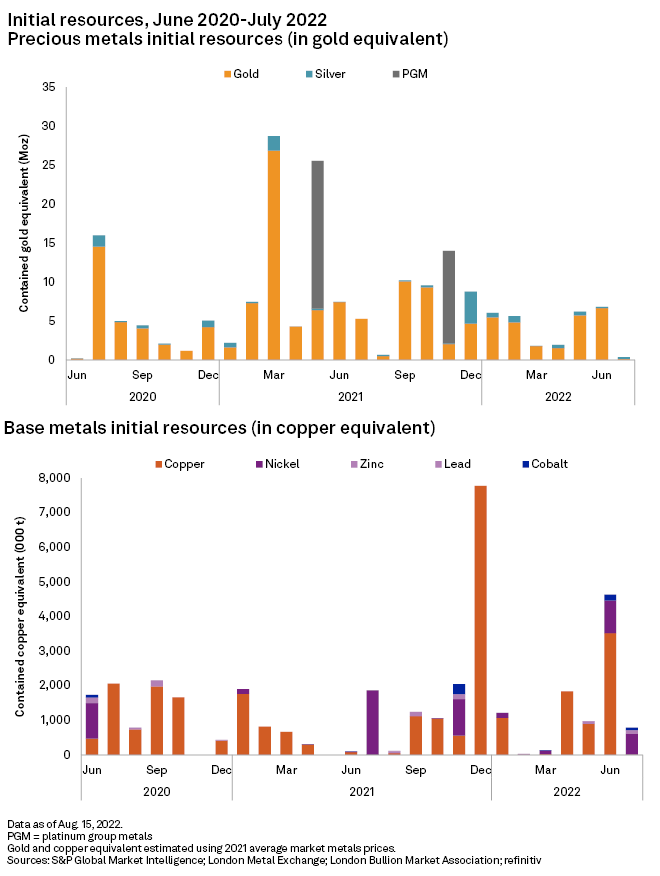 The second largest was by another Western Australian company exploring in Scandinavia. Alicanto Minerals Ltd. reported an initial inferred resource at its Sala zinc-silver project in Sweden, with 9.7 Mt grading 3.2% Zn, 47.3 g/t Ag and 0.5% Pb, containing 311,300 tonnes of zinc, 14.7 Moz of silver and 44,200 tonnes of lead.

As the graph below indicates, positive project milestone activity was up in July, to six from five in June. There were no negative milestones. 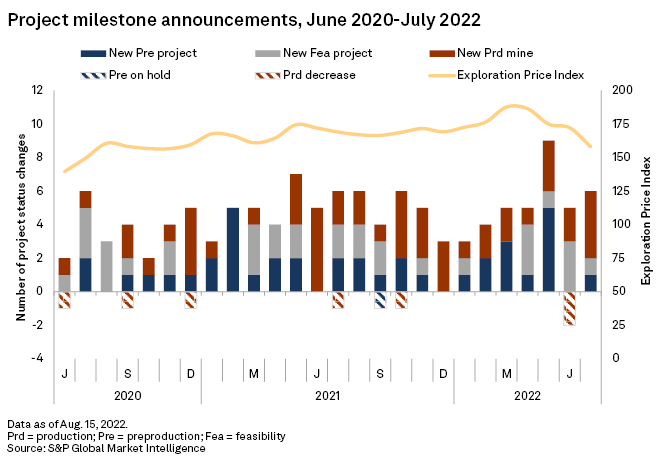 July's positive milestones included one project entering feasibility, one beginning construction for a new mine and production startups at four new mines or mine reopenings. Five milestones were for gold, and one was for base/other metals.

In the month's largest milestone, Luxembourg-based Nexa Resources SA began ramping up production at its Aripuana zinc-polymetallic mine in Mato Grosso, Brazil. Aripuana comprises three main zones — Arex, Link and Ambrex — and is projected to produce 70,000 tonnes per year of zinc, 24,000 t/y of lead, 4,000 t/y of copper, 1.8 Moz/y of silver and 14,500 oz/y of gold over an 11-year mine life.

The second-largest milestone was the reopening of Asante Gold Corp.'s Bibiani gold mine in Ghana. Asante acquired Bibiani in August 2021 and completed a project execution plan that included refurbishment and upgrade of the processing plant, the tailings storage facility and minesite infrastructure. Measured and indicated resources at Bibiani's main and satellite pits total 20.8 Mt grading 2.71 g/t Au, containing 1.81 Moz of gold, with an additional inferred resource of 8.4 Mt grading 2.78 g/t Au, containing 753,000 ounces of gold.

Quebec-based G Mining Ventures Corp. had July's third-largest milestone, with the start of mine construction activities at its Tocantinzinho gold project in Brazil's Para state. The open pit mine is projected to produce 174,700 oz/y of gold at an all-in sustaining cost of US$681/oz over a nine-year mine life. Initial capital costs are estimated at US$458 million.

Metals prices decreased for a fourth consecutive month in June, lowering Market Intelligence's Exploration Price Index, or EPI, to 158 from 172 in June. For the third consecutive month, the indexed price fell for all — gold, silver, platinum, copper, nickel, zinc, cobalt and molybdenum — of the eight constituents of the index. 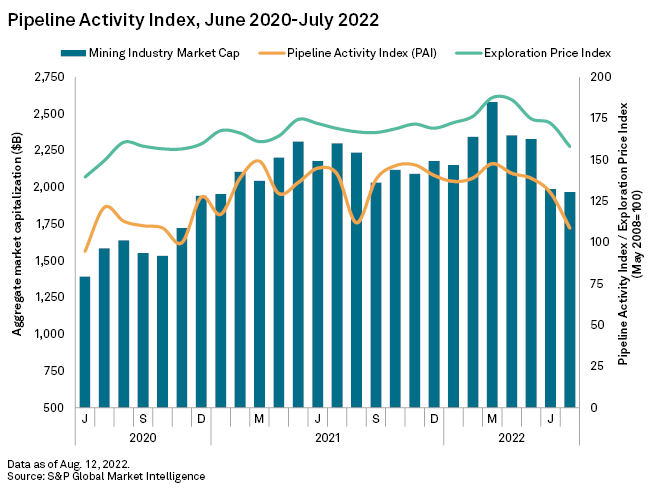 The EPI measures the relative change in precious and base metals prices, weighted by the percentage of overall exploration spending for each metal as a proxy of its relative importance to the industry at a given time.

Equities down for 4th consecutive month