How congested were the world's mobile markets in 2020?


How congested were the world's mobile markets in 2020?

Only 32 out of our 50 markets had tower estimates for year-end 2020, totaling about 6.1 million towers. Considering only these markets, each tower handled about 951 subscriptions in 2020, slightly worse than 941 in 2019 for the same 32 markets.

Click here for detailed data in Excel format (clients only).

Mobile subscriptions per MHz of spectrum

India and mainland China were the most congested markets in 2020 with 4.0 million and 1.4 million subscriptions per MHz of spectrum, respectively. These two markets were also the largest mobile markets in the world, with a combined subscription base of 2.75 billion. Both markets have been considering the use of millimeter-wave or mmWave spectrum for 5G but have not yet announced any timeline for its release.

Markets that have already released mmWave spectrum had the least congested spectrum networks. Unlike traditional allocations in low- and mid-frequency bands, mmWave bands require at least 100 MHz of bandwidth for efficient operation as recommended by the IMT-2020 5G standard of the International Telecommunication Union. 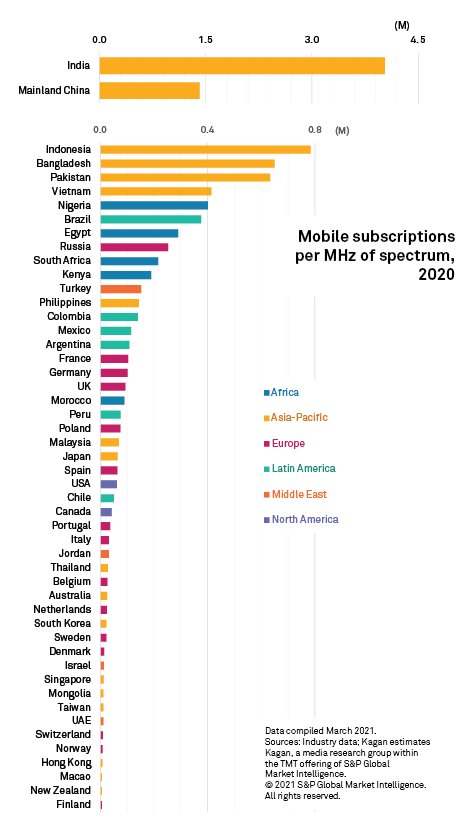 Previously the most congested tower market, the Philippines has moved to second place in 2020 with 6,450 subscriptions per tower. This made Kenya the worst market, with 6,944 subscriptions sharing a single tower.

The Philippines' improvement can be attributed to the local regulator's awarding of licenses to new tower companies and the aggressive tower rollout of incumbent operators in preparation for the entry of a new operator. We may see further improvements in the next few years, considering that the local regulator set a target of building more than 50,000 towers within an unspecified timeframe to expand connectivity in the country.

Pakistan also saw an improvement, moving from third place in 2019 to fifth place in 2020, also due to aggressive tower construction. Malaysia-based tower company edotco Group Sdn Bhd projects that Pakistan will see 40,000 new towers in the next 10 years.

On the other end of the list, South Korea was the least congested market with just 53 subscriptions per tower. South Korea, together with other East Asian markets Hong Kong, Taiwan, Japan, Macao and mainland China have the least congestion among the markets in our list due to their massive investment in small cells, distributed antenna systems and other network densification technologies. These markets lead Asia-Pacific both in total number and future growth of small cells, according to our most recent tower projections. 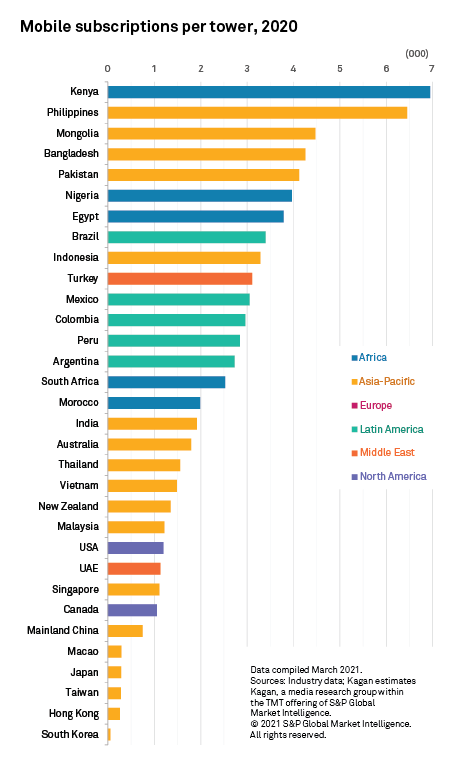 Using data from OpenSignal's 2020 report, we tried to analyze if higher spectrum and tower congestions are correlated with slower average mobile download speeds. We did a multiple regression analysis for the 28 markets with complete data — China and India were excluded as outliers — after doing a logarithmic transformation to account for the presumed nonlinear relationship between the variables.

The analysis yielded a statistically significant adjusted R-squared of 0.5696, which means that the relationship between spectrum and tower congestions explains 56.96% of the variation in average download speeds among the 28 sample markets. However, there appears to be a high variance in prediction residuals in lower congestion values. 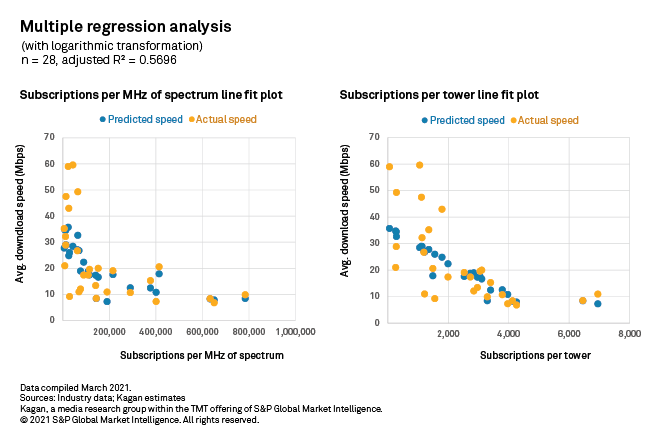 Subscriptions per tower yielded a regression coefficient that is statistically significant even at a 99% confidence level, which shows that tower congestion has some impact on network speed. On the other hand, the regression coefficient of subscriptions per megahertz of spectrum was not statistically significant at the same confidence level, suggesting that the effect of spectrum congestion on network speed may not be as significant as that of tower congestion.