As the novel coronavirus pandemic continues to spread worldwide, quarantines and lockdowns are preventing employees from going to work, with mining operations experiencing adverse effects since early March. The hardest-hit areas are Africa, Latin America and North America, due to national and provincial quarantines. While all commodities are potentially at risk, production of gold, copper and platinum group metals has been particularly affected.

Since the outbreak in China was elevated to a public health emergency in January, S&P Global Market Intelligence has been monitoring and documenting worldwide mine closures. This was completed on a best-efforts basis, and may not include all assets impacted by the pandemic. Although Chinese mines were significantly impacted beginning in January, limited reporting has been available on individual mines.

In the third of a weekly series of articles, we have identified, at time of compilation, disruptions to 247 mine sites in 33 countries. 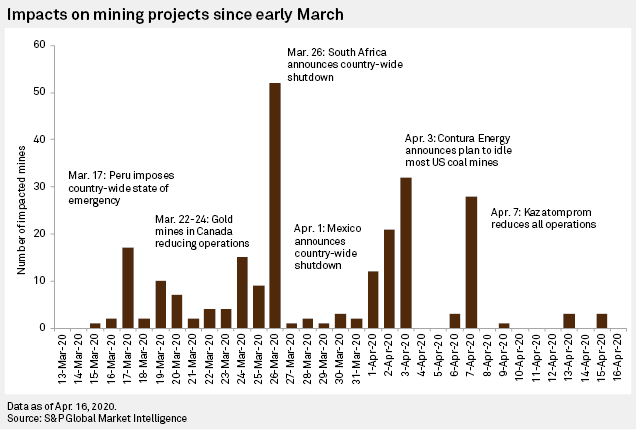 New mine closures have slowed down significantly since the Easter weekend, but many mines that closed in March and early April have announced extensions of their shutdowns. Peru extended its national State of Emergency to April 26, and mining has not been listed as an essential service as of yet. South Africa's quarantine has been extended to April 30, but mining was declared essential and operations were able to resume starting April 14. Many mines in Canada were able to begin ramping up operations starting April 15, with the Quebec provincial government declaring mining essential. 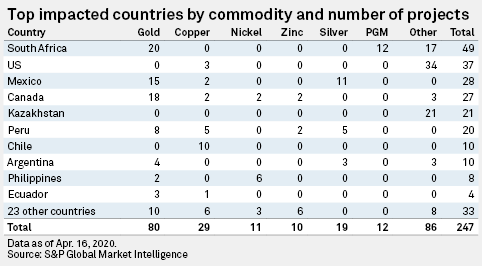 Based on our original production estimates for 2020 and the reported duration of announced suspensions, our analysts have identified the at-risk production for a wide range of commodities. For suspensions with undefined or indefinite periods, we have assumed a minimum 30-day duration. The unit of measurement used is noted next to the commodity.

At-risk gold production continues to climb, this week reaching approximately 1% of the 2020 global estimated production, with mine closures continuing for longer than initially anticipated. At-risk production for both silver and copper has risen by another 0.3% this week. Uranium's at-risk production has risen to 11.8% from 11.7%. At-risk nickel has risen from 0.5% last week to 0.9% this week, partially due to the announcement of Vale's plan to continue to keep Voisey's Bay in Canada on care and maintenance for up to three more months. With South Africa's government allowing mines to reopen, platinum's at-risk production has marginally decreased, from 2.85% to 2.78%. 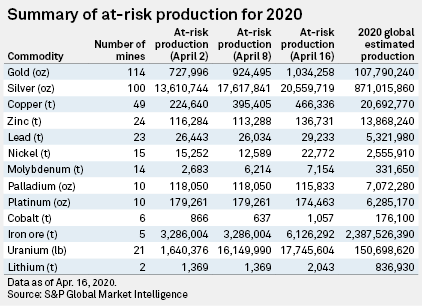 It is too early in the pandemic's spread to fully quantify impacts on the supply of commodities. Miners are making additional announcements daily, companies continue to withdraw 2020 guidance in light of the uncertainties, extensions to many suspensions are likely and limited disruptions at certain mines may not even impact full-year production. In each weekly update, we will continue to monitor impacted assets and the potential at-risk production.