We could see the price of gold rise at the same time as the U.S. Dollar Index, or DXY, in the short term.

Investors and fund managers were forced to liquidate their holdings, including gold, in order to meet margin calls and maintain their positions.

While gold is the archetypal safe-haven currency, we believe that the flight to gold as a safe haven was interrupted — primarily in the paper markets — in early March by margin calls stemming from the stock market crash and the global credit crunch. While there was buying on the physical and ETF markets, the selling of gold in the futures markets — in particular on the COMEX — substantially outweighed this. In this article, we examine the possible reasons for the gold sell-offs we saw in the first half of March and the resurgence after March 23. While we expect volatility to continue, the medium- to long-term outlook for gold is strong based on the U.S. Federal Reserve attempting to increase liquidity in the market by opting to purchase corporate debt/equities, which relieves some stress on gold. We will look at collateral, margin calls, the U.S. Dollar Index and T-bills in light of what is currently happening in the market.

The economic fallout from the COVID-19 pandemic has caused a dramatic drop in the velocity of money in the world economy, resulting in a dollar credit crunch that crashed the market and was essentially a margin call on the U.S. dollar, or USD. With less loans being created, reduced spending in the economy, loans being paid off — and debt, and hence money supply, being destroyed — fewer loans being rolled over, increased margin calls and the threat of defaults, the demand for the USD both inside and outside the U.S. has skyrocketed. The Fed instituted foreign exchange swaps, or FX swaps, along with a repurchase program for foreign and international monetary authorities, or FIMA, to help foreign central banks access the USD. Since trade has been severely curtailed, the USD must be exported in different ways. Doing this, however, resulted in even more dollars being created since these FX swaps are not free and have interest embedded in them, which will increase global demand for the dollar. As a result, even though the two are typically inversely correlated, we could see the price of gold rise at the same time as the U.S. Dollar Index, or DXY, in the short term. This had also occurred, however, through stretches of 2019, due partly to low government yields, expectations of inflation and trade wars. 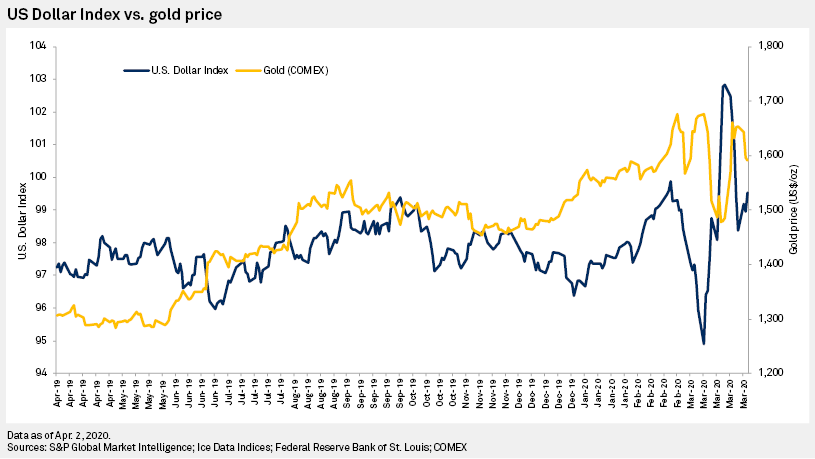 The gold price rebounded in the week of March 23 after the Fed instituted a plethora of new policies, including further quantitative easing to address the lack of liquidity in the market. In an unprecedented move, the Fed went into the market and allowed companies to use their corporate debt and other equities as collateral. The new policies eased up the selling pressure on gold and the stock market, causing both to rebound. When the Fed intervened with quantitative easing in 2008, the gold price rose and indeed entered a multiyear bull market. While we believe that the Fed is the largest driver of the gold price, there are other influences to consider, such as real interest rates on long-dated treasury bills, the DXY, margin calls and fear.

One reason for the gold sell-off in the second week of March was margin calls. With stock markets tumbling more than they had since 1987, investors and fund managers were forced to liquidate their holdings, including gold, in order to meet margin calls and maintain their positions. After the Fed announced a multitude of new policies March 23 and began its rapid-fire purchasing of collateral, the markets shot up, along with gold, which helped diminish margin calls on equities. This can be seen as a double-edged sword, however, since the Fed's purchases of mortgage-backed securities, or MBS, causes prices to go up and rates to go down, which could trigger margin calls on short positions. These short positions are typically used as a hedge by funds, banks and other financial institutions when MBS loans are issued. Such margin calls could produce a shock to the gold price if companies lack the liquidity to cover their shorts. 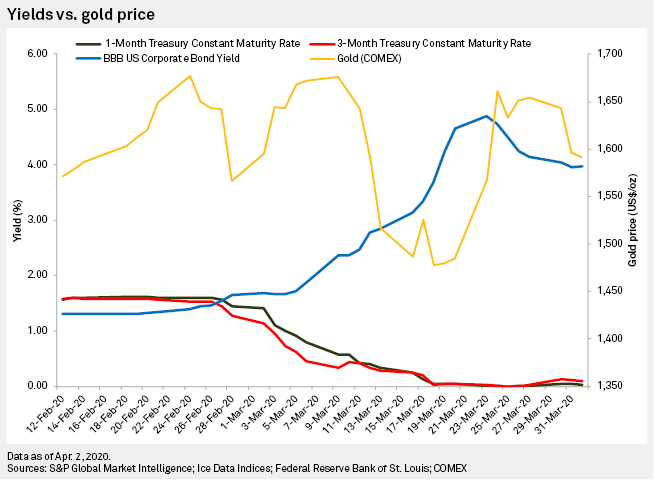 Companies normally exchange their corporate bonds with primary dealers for Treasury bills to gain liquidity in the repo market. Due to the crash in the corporate bond market, however, primary dealers are no longer accepting lower-rated, risky corporate debt. The resultant lack of liquidity was the contributing factor behind the drop in the gold price Feb. 28, which was the same time that corporate bond yields began increasing. Gold took a double knock since it was being used as collateral; since the Fed stepped in, however, corporate bond yields have been decreasing due to aggressive purchasing, meaning that companies no longer need to use their gold reserves as collateral unless they truly have no collateral left or hold only junk bonds. There is fear in the market, not only of the short-term disruption caused by COVID-19 but also because the Fed's actions may cause the kind of stagflation that has stymied Japan for years.

With the Fed attempting to address the collateral crisis in the market, margin calls are being made less frequently as prices rebound. The consensus metals price for gold in 2020 was US$1,534/oz and on March 31, the price was US$1,596/oz, or 4% higher than current forecasts. The uncertainty and fear caused by the pandemic make gold more attractive for investors over the medium and long terms. 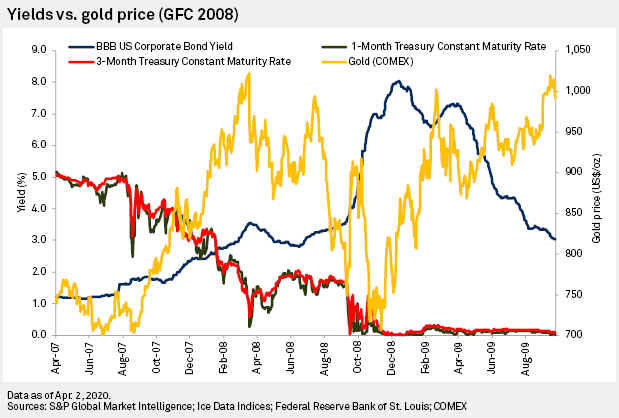 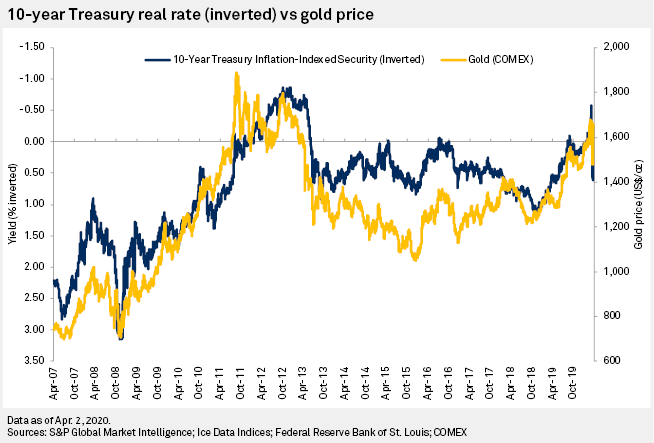