Latin America's top 11 telecommunications groups — including AT&T Mexico mobile — reported a 6.2% year-on-year mobile subscriber growth in 2021, mostly on the back of solid growth by market leaders América Móvil and Telefónica.

Total mobile subscriptions of the top 11 telecommunication groups in the Latin America and Caribbean region grew by 6.2% in 2021 compared to the year before. The two largest telecommunications operators, América Móvil SAB de CV and Telefónica SA, also grew year over year by 7.2% and 5.0%, respectively. The third largest operator, Telecom Italia SpA's TIM SA, which operates in Brazil, experienced a slower 1.2% growth rate over the same period.

These three operators combined held close to 77% of the total mobile subscription share of the 11 largest telecom groups in Latin America, which include Liberty Latin America Ltd., Millicom International Cellular SA, Megacable Holdings SAB de CV, Telecom Argentina SA, Oi SA and Empresa Nacional de Telecomunicaciones SA (Entel Chile). Grupo Televisa SAB, which is included in the Latin America top groups report, did not operate mobile services as of 2021, while Megacable is a newcomer to the segment, having launched mobile services in 2019.

Although AT&T is no longer covered in the 2022 LatAm top groups report, since selling its regional DIRECTV operation Vrio Corp. to Werthein Group in July 2021, we have included the U.S. group in the mobile analysis since it still operates mobile services in Mexico, for ease of comparison. In 2022, Oi will also no longer figure among the region's top mobile groups due to the sale of the Brazilian telco's mobile operations to competitors Claro Brasil, Telefônica Brasil SA and TIM Brasil.

* Latin America's top 11 telecommunications groups — including AT&T Mexico mobile — reported a 6.2% year-on-year mobile subscriber growth in 2021, mostly on the back of solid growth by market leaders América Móvil and Telefónica, as well as the fast expansion of smaller operators such as Liberty Latin America, to end the year at 642.6 million subscribers. 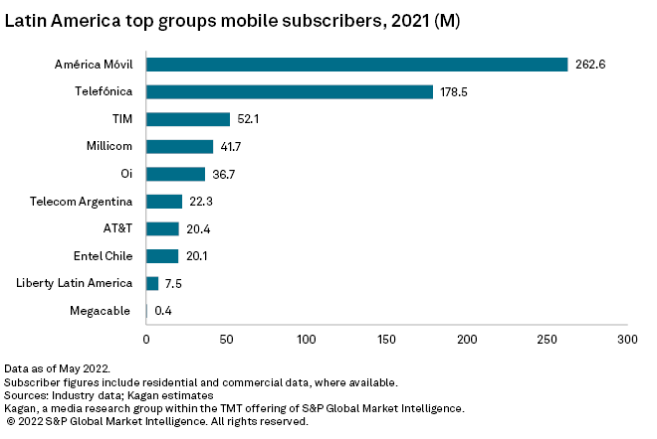 In Argentina, the decline in ARPU happened due to stronger pricing strategies within the prepaid and machine-to-machine, or M2M, segment, similar to the burgeoning prepaid segment in Mexico, as competition shrinks and subscribers are migrating from Telefónica México SA de CV (Movistar) to AT&T. Other markets are strengthening their postpaid products through promotions such as additional lines, larger data bundles and low-cost postpaid plans, such as the operators in Peru. 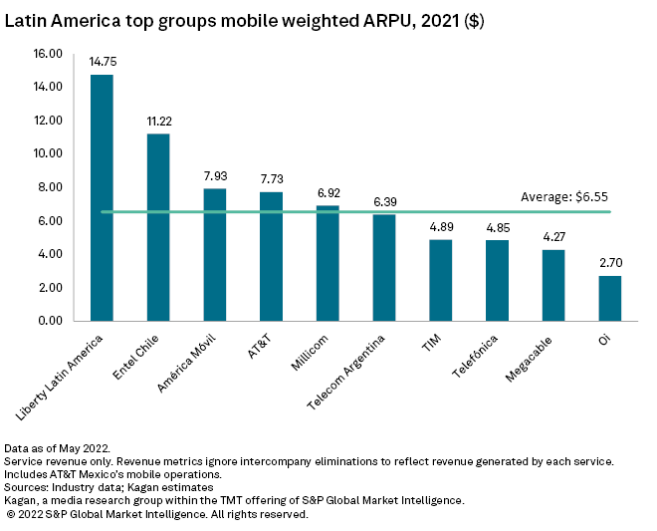 Mobile service revenue improved year over year in U.S. dollars as markets recovered by 6.6% to $48.99 billion, when including AT&T Mexico, or $47.17 billion without the operator. However, top telecommunication groups still experienced a negative CAGR over the past 10 years, primarily due to weaker exchange rates. However, markets like Brazil are improving hybrid-postpaid plans to stimulate the market. Attractive service plans and consolidation between operators have made prices competitive for price-sensitive consumers in both prepaid and postpaid segments. In Argentina, América Móvil's Claro Argentina bolstered its commercial activity to triple play plans, creating a variety of price ranges to capture the declining postpaid base.

Telefónica, which had already been divesting core assets such as data centers, towers and spectrum in most markets in Latin America to focus on its core businesses in Brazil, returned $104 million worth of spectrum in the 800 MHz and 1.8 GHz bands in Mexico, as part of a process to return all of its spectrum in that country by 2022 and become a full mobile virtual network operator using AT&T's network.