State utility commissions are quasi-judicial agencies that were created to, among other things, oversee the rates charged by the electric, gas and water utilities, which are essentially government-sanctioned monopolies. At the federal level, the Federal Energy Regulatory Commission plays a similar role.

Maintaining constructive relationships with regulators is key to the utilities' financial performance. The tenor of these relationships can be greatly impacted by the method and timing of the selection of individuals to serve on these agencies. Out of the 54 regulatory commissions followed by Regulatory Research Associates, in 39 the members are appointed, while in 15 the members are elected in some fashion. 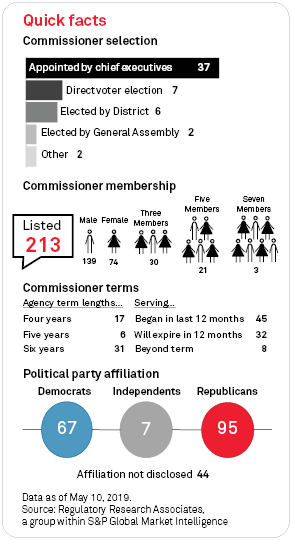 All else being equal, there is a greater degree of investor risk to jurisdictions in which commissioners are elected rather than appointed. Generally, energy regulatory issues are less politicized when they are not subject to debate in the context of an election. Realistically, a candidate for commissioner who is sympathetic to the utilities and/or appears to be amenable to rate increases is not likely to be popular with the voting public. A high degree of turnover can also make for increased regulatory risk.

Contact us to learn about corresponding data or more on the selection processes at state and federal utility regulatory agencies, including the D.C. Public Service Commission and the New Orleans City Council.

Learn more about our regulatory coverage.