US fintech funding on pace to end year higher than 2019

Investor interest in private U.S. financial technology companies has remained evergreen in the face of the economic downturn wrought by the coronavirus. Funding is on track to end the year higher than 2019, both in terms of dollars raised and number of transactions: As of the first half of 2020, the amount raised was up 30.2% versus the prior-year period and volume was 14.2% higher. 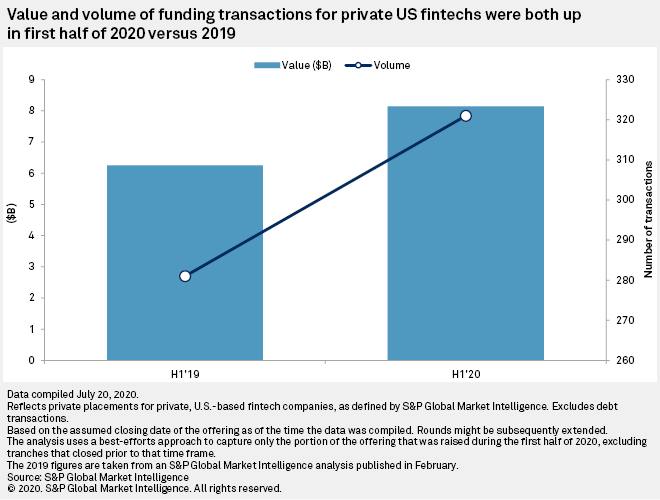 The amount of capital flowing to private U.S. fintech companies saw only a modest decline in April, even as the COVID-19 pandemic gripped the nation, and by May the level was higher than any of the preceding months in 2020. The volume of transactions fell sharply in April, though it too recovered to more normalized levels in May and June. 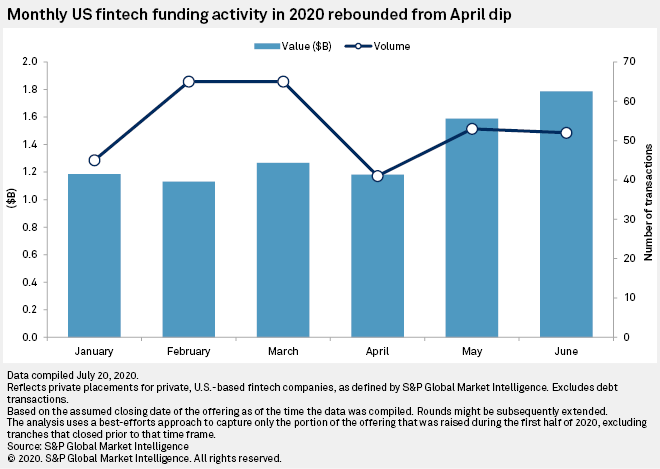 Stripe Inc. played a pivotal role in keeping the U.S. dollar amount up in April. The payment processor extended its series G round in mid-April, raising approximately $600 million more from some of the most prominent venture capital funds. Without it, the total raised by all private U.S. fintech companies in April would have plummeted 56.5% versus March. Despite the uncertainty around the economic environment, Stripe consistently ranks as the highest-valued private U.S. fintech startup and is one of the most well funded, having raised approximately $1.7 billion to date, by our tally.

There is still a high degree of uncertainty regarding how the pandemic and its attendant economic impacts will play out. But overall, investors in U.S. fintech companies, both public and private, seem to be shrugging off these concerns. Funding for private companies is on track to end 2020 higher than 2019 and we think this is likely to play out. There are still large amounts of dry powder at venture capital firms and a string of U.S. fintech startups have shown of late that they can achieve exits for their investors via IPOs or M&A.

If you are a current client, click here to read the full report.