Kagan estimates paid OTT video subscriptions penetrated approximately 36.4% of broadband households in 2018 and are expected to grow at a 16.4% CAGR over the next five years.

Iflix continues to strengthen its presence in Indonesia, which is considered one of its important markets, by maintaining various local partnerships. Aside from its multiphase collaboration with major local telco PT Telekomunikasi Selular, it has also added Indonesian media company MNC to its list of investors.

The OTT player also strengthened and added several local content deals during the first half of 2019. It started the year by releasing "Magic Hour: The Series 2," a sequel to "Magic Hour: The Series." In March, its collaboration with local production house Starvision brought in nine more movies on top of its 84 popular titles already available on iFlix.

HOOQ has remained relevant by focusing on consumer-driven innovation and providing a hyper-local content slate for emerging markets. In countries like Indonesia, the Philippines and Thailand, local programming accounts for approximately more than half of the service's viewing minutes.

The OTT player is also trying to shift to offering episodic originals, which means investing more in local talent across emerging markets and building out a content library with more of these titles. Through HOOQ Filmmakers Guild, its talent development competition, HOOQ is able to ramp up its investment in originals. For 2019, "Klenix," one of the five original selected screenplays that aired in March, was from Indonesia.

In December 2018, HOOQ unveiled three local original series in collaboration with Indonesian online content group Vice. The new shows include a talk show "TL;DR," a full-length series "Check Out the Store Next Door," as well as a short-form series. Some of Vice's digital content has also been made available on the OTT service's free layer at launch. HOOQ also expanded its partnership with streaming video provider uCast during the same month, as it added up to 50 online channels on the service's freemium offering.

Viu has maintained its pan-regional strategy throughout its different areas of operation, in which Asian content is supplemented with various local PCCW Ltd.'s Viu Originals. In Indonesia, there were several Viu Originals that bagged awards during the 2018 Asian Academy Creative Awards, which include "The Publicist" for best drama series and Michael Kho in "Kenapa Harus Bule" for best actor in a supporting role.

The Viu Pitching Forum was also launched in early 2019. This is held annually in an effort to develop ideas or stories of local filmmakers and turn them into Viu Originals. For last year, two 13-episode web series were produced. "Halustik," a horror-thriller, was released in September 2018, and "Knock Out Girl," a drama series, was released in December.

Netflix Inc. has also taken the local route since it launched in Indonesia in 2016 and introduced a localized interface and Bahasa Indonesia subtitles in October 2018. At that time, the OTT service also announced more Indonesian content would be released, including local films "Laskar Pelangi," "Merantau," and "Filosofi Kopi." Meanwhile, some of the Netflix originals that have local subtitles are "Stranger Things" and "To All the Boys I've Loved Before."

The OTT player also launched its first Indonesian original movie, "The Night Comes for Us," during that time. Having local original films on its content slate helps Netflix enable local film creators to showcase their work worldwide.

Amazon.com Inc.'s Prime Video's uptake is still dormant in the country. There has been minimal progress in localizing content and establishing distribution partnerships as compared to the other selected subscription OTT services. Amazon does not have much brand recall as an online video service or as an e-commerce platform in Indonesia, so having a dedicated e-commerce site for the country or a more relatable content offering alongside local telco partnerships may help widen its reach within the market.

Iflix and Viu have the most competitive price points among the selected subscription OTT services. Since our last update, both OTT players kept their respective monthly fees at the same rate, while HOOQ increased its monthly subscription plan by IDR19,500. But even if the latter had a price increase, all three still fall below 0.5% of our affordability ranking, which is based on price as a percentage of the country's estimated gross national income purchasing power parity, or GNI PPP. Indonesia's 2018 GNI PPP was approximately US$12,182. 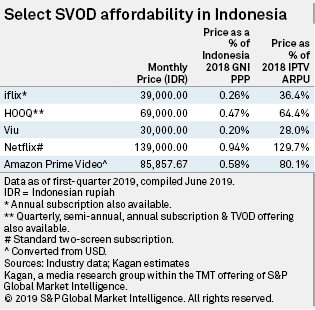 Meanwhile, Netflix is still offered at a premium when compared to the other selected services despite trying to make itself more accessible to the Indonesian market. A monthly subscription to iFlix, HOOQ and Viu combined is almost equal to the global OTT player's affordability ratio of 0.94%.