With plans to increase its over-the-top content spend from €85 million in 2019 to €350 million in 2025, RTL Group SA continues to solidify its position as one of the main European online video providers, ending the first quarter of 2020 with 1.5 million paid subscriptions.

The media group targets 3 million paid subscriptions by the end of 2021 and 5 million to 7 million by 2025 with a projected €500 million-plus in OTT revenues.

With plans to increase its over-the-top content spend from €85 million in 2019 to €350 million in 2025, RTL Group SA continues to solidify its position as one of the main European online video providers, ending the first quarter of 2020 with 1.5 million paid subscriptions. RTL's venture in the streaming world began with the launch of Videoland in the Netherlands in the fourth quarter of 2013. TV Now made its debut 2.5 years later in, at the time, an emerging German OTT market run by Amazon.com Inc., Netflix Inc. and ProSiebenSat.1 Media SE. 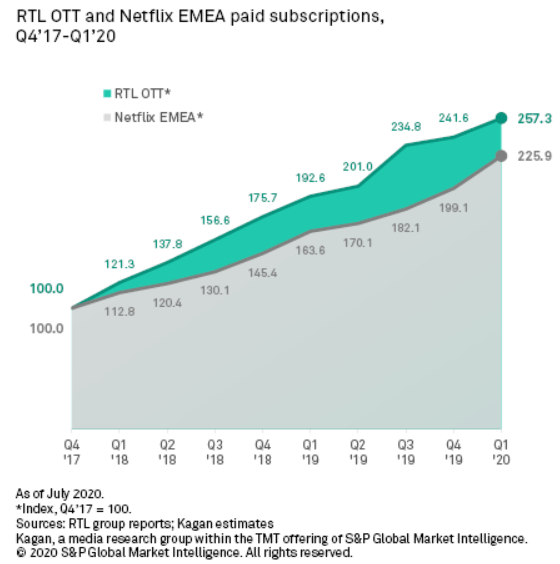 When looking at paid subscription growth indexed to 100 for fourth quarter 2017, the Luxembourg-based media group outperformed Netflix EMEA by 31 percentage points between the fourth quarter of 2017 and the first quarter of 2020. It is currently the third European online video provider when measuring paid subscriptions behind Nordic Entertainment Group AB)'s Viaplay and Access Industries Inc.'s DAZN.

At the country level, we see two different patterns. In the Netherlands, Videoland has doubled its market share from 7% in 2017 to 15% in 2019, while Netflix fell by 3 percentage points. This can be partly attributed to RTL XL Premium, a pay catch-up service, closing down in the second quarter of 2018 and merging with Videoland, leading to a higher market share for RTL. On the other hand, in Germany, TV Now has maintained its share of 4% since 2017 despite having 416,000 net additions over the two-year period. Germany is the only European market where Prime Video is in first place in terms of active paying users and is followed closely by Netflix, resulting in smaller market shares for the local providers such as ProsiebenSat1 and RTL. 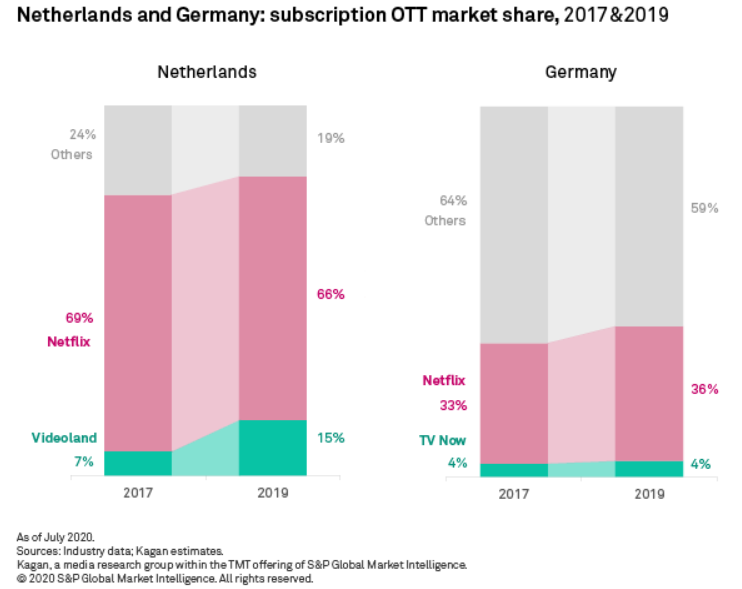 RTL Group's strategy involves investing in the three pillars of OTT, programming and technology in an attempt to diversify its source of income away from the downward pressure in advertising revenues. This essentially translates into the creation, distribution and monetization of video programming across multiple platforms and territories. It strongly resembles what ITV PLC has been doing in the U.K. via ITV Studios Ltd. and its ITV Hub+ as well as ProSiebenSat1 in Germany with Red Arrow Studios and Maxdome.

The media group targets 3 million paid subscriptions by the end of 2021 and 5 million to 7 million by 2025 with a projected €500 million-plus in OTT revenues. It does not compete with players such as Netflix, Amazon or Disney in the OTT market but is instead looking to take advantage of the increasing number of services to which each home subscribes.

International Players Behind 91% Of OTT Video Subscriptions In Spain