The deal value of mining industry M&A in 2020 declined by by 22% year over year — mostly due to the pandemic's disruption of normal activity in the first half — including a 17-year low in the number of base metals deals. A second factor was the lack of very large deals at the top of the industry, with resulting asset divestitures, as there were in the previous two years with the Barrick-Randgold and Newmont-Goldcorp mergers.

M&A activity bounced back in the second half, however, particularly for gold amid record prices. Strong gold prices should sustain M&A again in 2021, while the ongoing global economic recovery should support deal activity among industrial metals such as copper, nickel and zinc.

A list of qualifying 2020 transactions can be found here.

In 2019, Newmont Mining's takeover of Goldcorp, the closing in January of Barrick Gold's 2018 agreement to acquire Randgold Resources, plus high-value asset spinoffs from both deals throughout the year, accounted for $12.69 billion, or just over half, of the 2019 total for all deals. With no such high-end deals, the 2020 total was 63% higher than 2019 would have been without those two large deals. Along with its increase in the number of transactions, 2020 could therefore be seen to reflect an improvement in broad-based deal activity year over year, driven by gold, despite the pandemic's impact.

(Throughout this report, acquisition assets are categorized by primary metal. We do not split the acquisition cost for projects that contain more than one metal. Terminated, nonequity deals like royalty and streaming, and "earn-in" transactions are not included in the analysis, and deal status is as of the time the data was compiled.) 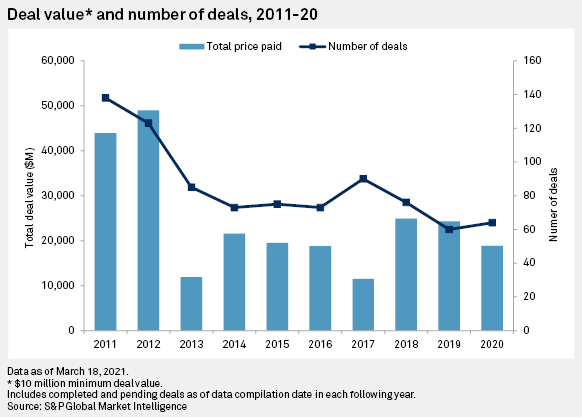 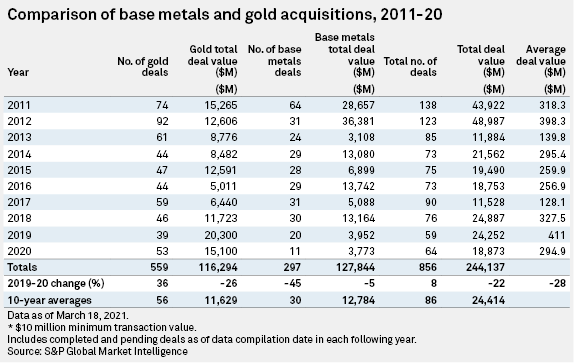 The main reason for the resiliency in mining acquisitions was the significant increase in the price of gold as a haven in challenging times, driving the number of gold-focused transactions to 50 from 39 in 2019. The increase in gold deals more than offset a near-halving of the number of base metals (copper, nickel and zinc) deals to 11 from 21 in 2019 — the smallest number of base metals deals with resources and a deal value of at least $10 million since 2003. 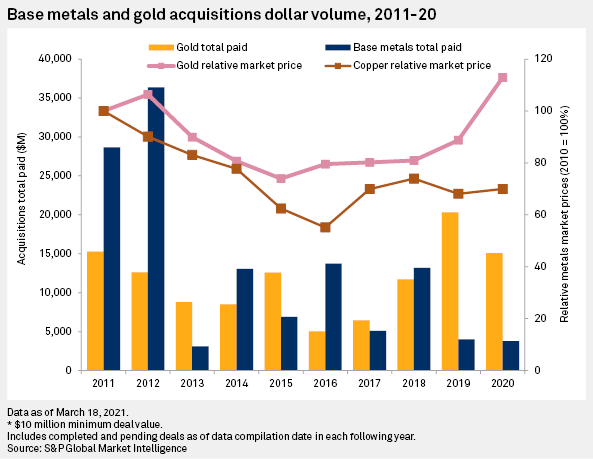 There were four deals with at least $1 billion deal value in 2020, as there were in 2019, three gold and one copper; nine deals over $500 million, six gold and three copper; and 16 deals over $200 million. The largest was ASX-listed Northern Star Resources Ltd.'s completed acquisition of Saracen Mineral Holdings Ltd. through a "merger of equals" transaction, announced in October. Northern Star agreed to exchange 0.3763 of a share for each Saracen share, for a total value of $4.50 billion as of the announcement date ($4.03 billion on closing), to acquire Saracen and its three producing mines: Kalgoorlie, South Laverton-Carosue Dam and Thunderbox, all in Western Australia. The deal's rationale was consolidation of Kalgoorlie, which was owned 50/50 by the two companies. 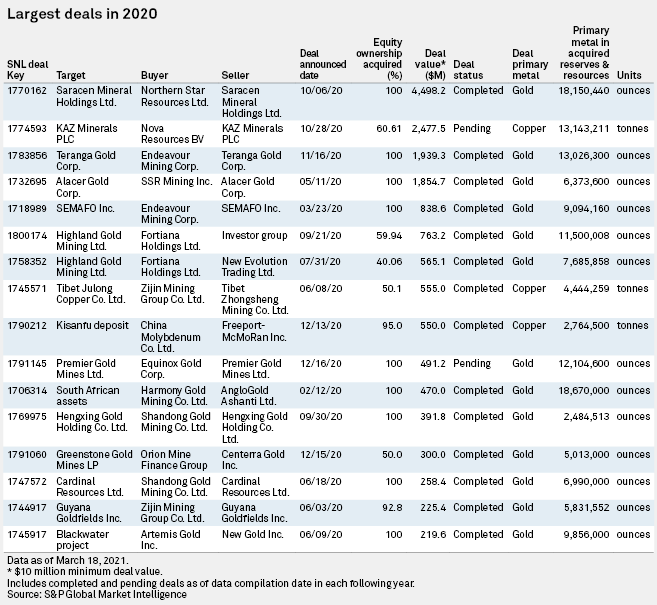 The second largest was Netherlands-based private company Nova Resources BV's pending acquisition of the remaining 60.61% of London-listed KAZ Minerals PLC for $2.48 billion in cash (currently $3.06 billion in a renegotiation). Nova is owned by KAZ Chair Oleg Novachuk and Vladimir Kim, a nonexecutive KAZ director. The deal rationale is based on a determination that the increasing risk inherent in the development of the 75%-owned Baimskaya copper project (Aristus Holdings Ltd. 25% carried) in Kazakhstan justifies taking the company private.

U.K.-based Endeavour Mining Corp.'s completed takeover of Canada-based Teranga Gold Corp. was the year's third-largest deal, with the all-share transaction valued at $1.94 billion ($1.77 billion on closing). The merger will result in one of the world's largest gold producers exclusively focused on West Africa, including a large footprint in Burkina Faso with the addition of Wahgnion to Endeavour's current four mines in the country, and adding Senegal, which hosts Teranga's Sabodala mine. Metals and Mining recently published an analysis of the transaction.

The fourth deal with a value over $1 billion was Canada-based SSR Mining Inc.'s completed acquisition of U.S.-based Alacer Gold Corp. in an all-share, zero-premium "merger of equals" transaction that valued Alacer at $1.85 billion on the announcement date and $2.19 billion on closing. The merged company is based in Denver. Alacer owned an 80% interest in the large, expansion-stage Copler gold mine (Lidya Madencilik San. ve Tic. AS 20%) in Turkey, which began production in 2011 and has an estimated 32-year mine life.

Mining deal activity to improve in 2021, driven by positive indicators

There were 10 qualifying deals in January, six for gold and two each for copper and nickel, with deal value totaling $2.04 billion. In the two largest deals, Switzerland-based Glencore PLC agreed to divest its 73.1% interest in Mopani Copper Mines PLC to Zambian government company ZCCM Investments Holdings PLC. Mopani (First Quantum Minerals Ltd. 16.9%, ZCCM 10%) owns the Nkana and Mufulira copper-cobalt mines. ZCCM is paying Glencore a nominal $1, and Mopani will repay $1.5 billion of debt to Glencore's creditors from mining revenues over the three years following completion, which is expected to occur within three months.

In the second deal, Toronto-based Agnico Eagle Mines Ltd. completed its acquisition of Toronto-based, Nunavut, Canada-focused TMAC Resources Inc. in an all-cash deal valued at $226.8 million as of the Jan. 5 announcement. TMAC agreed to the takeover after the Canadian government rejected a bid for the company by China-based Shandong Gold Mining Co. Ltd. on security grounds, given the location of TMAC's Hope Bay gold mine near Canada's sensitive Arctic region. Agnico's offer represented a 26% increase over Shandong's offer and a 66% premium to TMAC's 20-day volume-weighted average price as of the day before the announcement. Metals and Mining recently published an analysis of the deal. 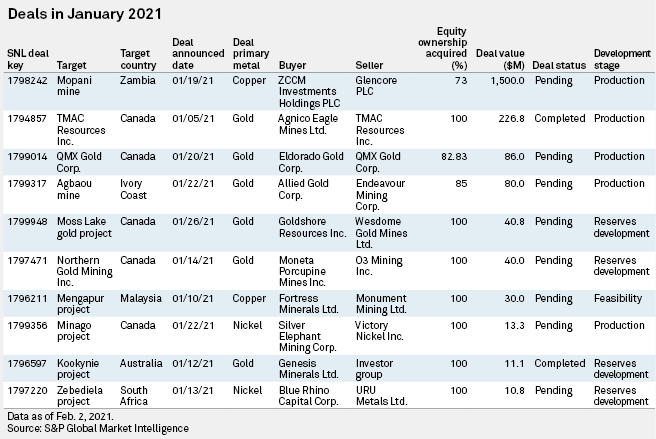 Gold prices have cooled slightly in early 2021 but remain high, as do copper and nickel prices. Zinc has also slipped somewhat, but it was from a 20-month average monthly high as of December 2020. The U.S. is anticipating a calmer political atmosphere with the new Biden administration, along with significant, promised infrastructure investment. The combination of strong industrial metals prices, a cooler political atmosphere and signs of increasing demand for industrial metals as the major economies invest in post-pandemic economic recovery suggests that 2021 is shaping up to be a healthy year for mining industry acquisitions — of both producing mines and development-stage projects.

Article and databook amended to include additional deals completed in 2020 that were identified during compilation of the gold M&A article titled "Gold M&A deals up in 2020 despite, and helped by, COVID-19," published March 25, 2021.

Learn how you can identify and evaluate mining investment opportunities and make well-informed decisions.