Machine Learning (ML) algorithms leverage large datasets to determine patterns and construct meaningful recommendations. Likewise, credit risk modelling is a field with access to a large amount of diverse data where ML can be deployed to add analytical value. In the following analysis, we explore how various ML techniques can be used for assessing probability of default (PD) and compare their performance in a real-world setting.

A recent publication by the Bank of England (BoE) and the Financial Conduct Authority (FCA) reports the results of a survey on the use of ML in United Kingdom (UK) financial services.[1]   Results show that two-thirds of respondents use ML in some form. The use cases have passed the development stage and are starting to enter into the deployment stage. The banking and insurance sectors are advanced with respect to deployment, and ML is most often used in anti-money laundering and fraud-detection applications. The survey also notes that ML may amplify existing model risk, while validation frameworks still need to evolve to cope with the complexity of ML applications.

As ML is becoming more represented and influential in finance, it is important to recognize its benefits and drawbacks to prudently evaluate its performance. ML models have the potential to uncover subtle relationships, capture various nonlinearities, and process unstructured data. For example, applications such as fraud-detection analysis or textual data analytics benefit from not needing to predefine structure, that is, the theory behind finding patterns and extracting meaningful outputs. ML can do this without the need for humans to derive theoretical models with accompanied assumptions, and the data is empirically driving the ML model.

However, ML may still contain assumptions, such as the dataset does not contain. This can pose a significant challenge when analyzing noisy historical financial data and may lead to poor model performance. Imposing constraints on the model to control for model biases or counterintuitive behavior can also be an onerous task for some ML techniques. In addition, decomposing ML models can be complicated, thus creating issues when there is a need to explain the model’s functionality in detail.[2] [3] [4] [5]

We analyze the performance of selected ML algorithms for the prediction of PD. To make this analysis relevant and material, we use a real-world example of constructing a default prediction model for private companies. To that end, we collected a global sample of private companies across various industries.[6]  Private companies are a particularly relevant example for our analysis for a number of reasons. The universe of private companies is large and highly heterogeneous, as it includes large international corporations, as well as local small- and medium-sized enterprises. The composition of a global sample captures companies from various macroeconomic environments, thus introducing additional macroeconomic risk components. Additionally, private companies tend to publish limited and infrequent financial disclosures, which reduces the scope of available information.

The characteristics of private companies create a need for a default prediction model to be well designed in order to capture the heterogeneity of private companies and achieve good performance under the data availability constraints. We leverage the S&P Capital IQ platform to collect annual financials for private companies globally from 2002 to 2016. Our final sample includes a total of 52,500 observations, of which 8,200 companies have defaulted.

Feature Engineering: We ‘pre-treat’ the financial data by calculating relevant financial ratios to express various risk dimensions, such as profitability, leverage, and efficiency. We also include a Country Risk Score (CRS) and Industry Risk Score (IRS) as additional variables to help the model capture systemic risk components of various countries and industries. We also standardize the ratios to make them comparable and limit the impact of outliers, thus enabling the algorithms to achieve better performance.

Variable Selection: To account for the limited availability of private company financial data, we only use ratios that have sufficiently good coverage across the S&P Capital IQ platform, while also ensuring the representation of relevant risk dimensions. Such parsimonious construction simplifies the use of the model in deployment, as it requires fewer inputs and less data handling, and increases the model coverage. This is especially important for private companies, where financial data is generally more infrequent and less comprehensive. Table 1 contains the final list of selected variables used to train the PD model with various ML algorithms. 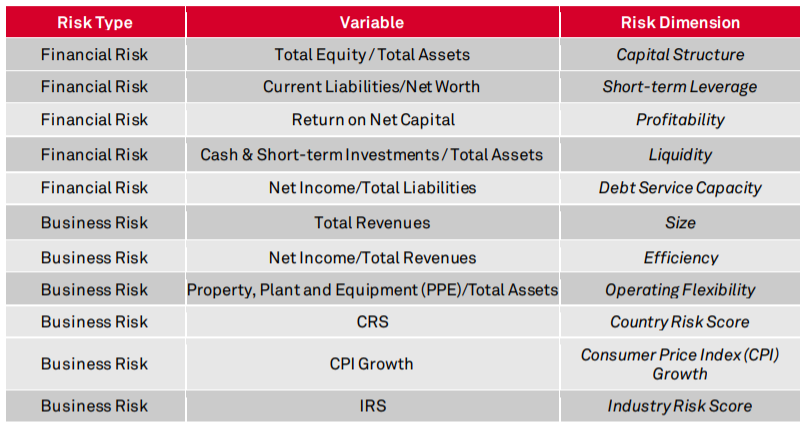 In-Sample and Out-of-Sample Analysis: We split the dataset of private companies into two samples to help assess the performance of the model in a real-world deployment. The in-sample portion (90%) represents our training dataset and is used to develop the model, while the out-of-sample portion (10%) is used to evaluate the model. We also make sure that the two datasets are similar with respect to the default rate and other descriptive properties (such as industry sectors and revenue size).

There are several ML algorithms available, and selecting the optimal algorithm is not straightforward. Algorithm selection depends on various factors, such as data type and features, transparency and interpretability, and model performance characteristics. We selected the following classification and regression algorithms for further analysis:

We tested the performance of the described ML algorithms using our global sample of private companies and accompanied variables, listed in Table 1. We implemented the analysis using Statistics and ML Toolbox™ functions in MATLAB®, and applied default algorithm settings to train the PD models and calculate their performance statistics.[7]

Out-of-sample AUC, however, demonstrates a more realistic measure of the model’s performance in a real-world situation. While the decision tree method still shows the best performance, it is only marginally better than logistic regression. It is worth noting that the performance of the decision tree deteriorates considerably out-of-sample compared to in-sample, indicating lower reliability of this method in a real-world application. In comparison, the other approaches exhibit more consistent performance.

In Figure 1, we depict the out-of-sample ROC curves for the analyzed ML models. While two models may have the same AUC, the shape of corresponding ROC curves may be very different. For example, the decision tree and logistic regression have very similar out-of-sample AUCs, but their corresponding ROC curves are very distinct and cross at the low false positive rate and the high true positive rate. This reflects the Type I error and Type II error characteristics of the two models.[9]  The decision tree outputs are rather binary, i.e., producing PD estimates of either 0% or 100, resulting in a more abrupt shape. The logistic regression, however, produces much more granular and continuous estimates of PD, resulting in a much smoother shape of the ROC curve. 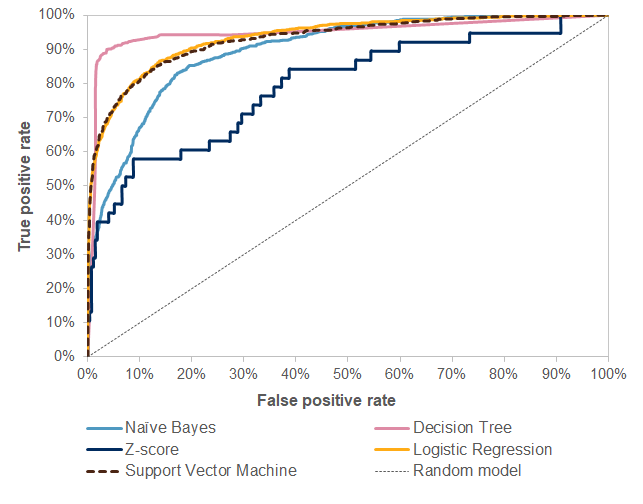 In addition to model performance, transparency and interpretability also play a vital role in the model evaluation. Namely, understanding drivers and the sensitivity of model predictions to changes in the input is an important aspect of model usability. In that aspect, logistic regression is preferred to SVM as it is more straightforward to analyze and interpret. The logistic regression also enables users to incorporate various constrains easily, thus making this technique highly controllable and adaptable.

At S&P Global Market Intelligence, we developed PD Model Fundamentals (PDFN) - Private Corporates, a statistical model that produces PD values for all private companies globally. The model is based on the maximum expected utility (MEU) theory and employs a logistic regression algorithm with ridge (Tikhonov) regularization.[11] [12]   The methodology includes a number of data handling techniques to support robust treatment of financial ratios and management of extreme values. The process of variable selection leverages a k-fold Greedy Forward Approach to support a good out-of-sample and out-of-time performance. The transparent, ‘glass-box’ model structure of PDFN - Private Corporates enables users to understand the model behavior and easily analyze sensitivity and contributions of model inputs.

Figure 2 shows an example of PDFN - Private Corporates outputs for Neiman Marcus Group, Inc. (‘Neiman Marcus’), an omni-channel luxury fashion retailer primarily located in the U.S. Based on the latest available financial data, the company’s PD of 4.1% implies a credit score of ‘b’.[13]  The in-depth analysis of the model drivers reveals that the retailer is highly risky from a financial and business point of view. The contribution analysis shows that low profitability and high debt are the main drivers of the PD estimate. The sensitivity metrics indicate that Neiman Marcus’s credit score is highly sensitive to any adverse changes in industry and country risk factors. 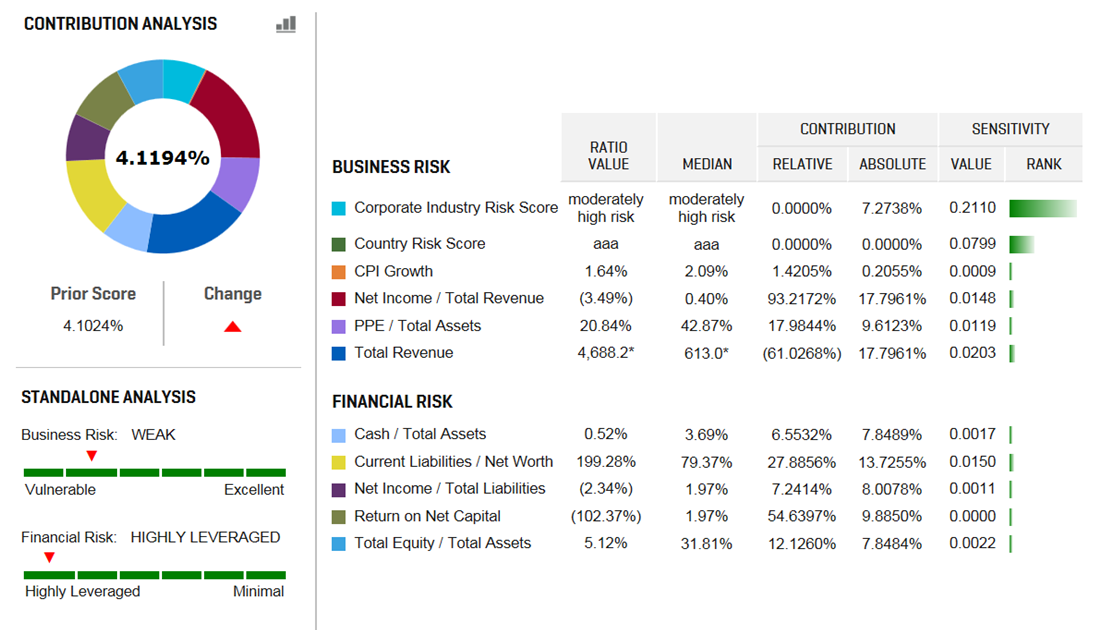 Note: Industry median calculated based on a sample of department stores in the U.S.

Source: S&P Global Market Intelligence, as of January 21 2020. For illustrative purposes only.

A prudent approach includes reviewing and assessing various techniques for the problem at hand. While all presented models could be further refined and optimized to achieve better performance, the knowledge of the end application should also be factored into the decision-making process. In a real-world environment, this includes taking into account data availability limitations, model transparency requirements, the granularity of model outputs, and ease-of-use.

[6] Financial sector is excluded from the analysis.