Dealmakers entered 2021 with increased confidence about M&A after activity picked up during the last six months of 2020.

The total announced value of global M&A deals just about doubled in the second half of 2020 to $1.736 trillion compared to the first half of the year, according to S&P Global Market Intelligence's latest M&A and equity offering report. The rebound came after M&A activity slowed considerably during the height of the COVID-19 pandemic when economic uncertainty spiked along with market volatility. But companies are ready to transact again, Evercore Inc. co-Chairman and co-CEO John Weinberg said during a February conference call.

"We're seeing a lot of clients really reaching out and wanting to talk about strategic situations," he said. 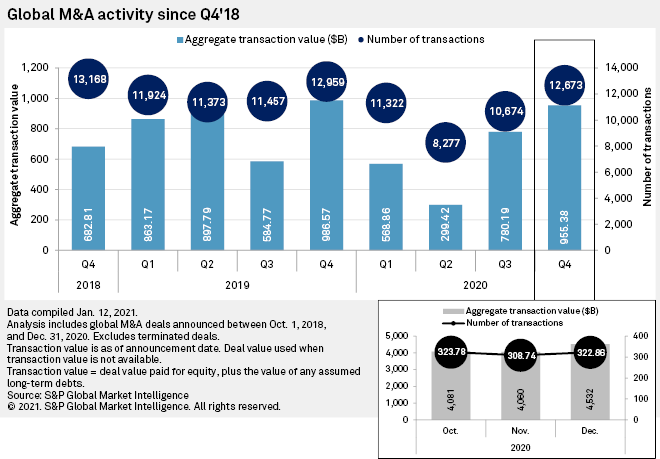 Plenty of uncertainty and pandemic-related challenges still remain. However, the rollout of vaccines has helped increase optimism about the economic outlook, and the prospects of continued government intervention have reduced concerns over the pandemic's negative impact on the economy. The Conference Board's measure of CEO confidence reached a 17-year high during the first quarter of 2021, according to its most recent survey results released Feb. 18.

Executives in some of the leading M&A markets are also operating in an environment with greater political clarity. The completion of U.S. elections and the transfer of power in the White House reduced uncertainty in the country, the leading M&A market. Having the U.S. federal government controlled by Democrats also increased the likelihood of further government stimulus.

For years, the United Kingdom's drawn-out exit from the European Union created obstacles to dealmaking in that region. However, Brexit received some finality when the U.K. and EU reached a trade deal agreement in late 2020.

The U.K. ranked as the No. 3 M&A market with total value of $271.32 billion in 2020. The total was up 28.1% year over year, and the growth made the U.K. one of the few countries where announced deal value increased from year-ago levels. Much of the activity came after the end of initial lockdowns that were instituted to slow the pandemic. The second half of 2020 accounted for 71.5% of the U.K.'s total announced deal value for the entire year.

Globally, companies in the technology, media and telecommunications space produced more deal announcements (9,017) and a higher announced value ($694.23 billion) than any other sector. Buyers looking to enhance their technology has been an M&A theme for some time, and that is expected to continue after the pandemic subsides.

"Technology-driven disruption continues to be a catalyst for M&A across industries," Lazard Ltd. Chairman and CEO Kenneth Jacobs said during a February conference call. 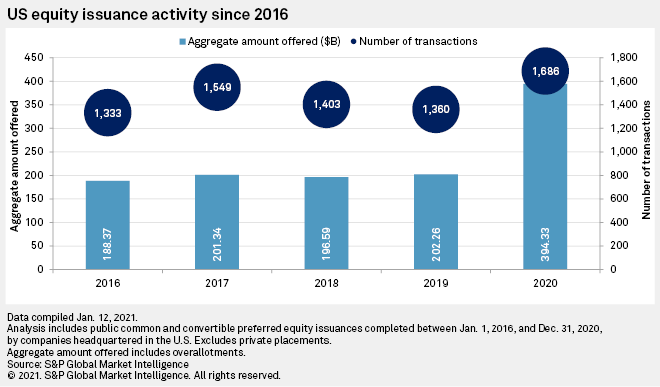 Potential buyers should have available financing to support deals as interest rates remain historically low and the equity markets stayed open throughout the pandemic. Global equity issuance jumped year over year in 2020 with the total value raised increasing 62.4% to $837.40 billion and the number of deals increasing 21.4% to 6,294.

The growth marked the end of a three-year downward trend in the total value and number of global equity deals. Activity in the U.S. helped with the turnaround as the total value of equity raised nearly doubled year over year to $394.33 billion in 2020 from $202.26 billion in 2019.

Heading into 2020, U.S. companies had less need to issue equity after corporate tax cuts signed into law at the end of 2017 helped boost their capital. However, many turned to the capital markets as it became clear the pandemic would negatively impact the economy. The raising of equity helped companies shore up balance sheets.

The issued equity helped build capital allocated for M&A. In 2020, just about half of the $154.48 billion raised in U.S. initial public offerings came from special purpose acquisition companies, which executed 54.3% of the total number of U.S. IPOs during the year.

The total raised from SPACs, also known as blank-check companies, was record-setting and some such as Goldman Sachs Group Inc. Chairman and CEO David Solomon expect an eventual slowdown in the activity. But the capital raised should help fuel M&A in the near term as SPACs use the proceeds to purchase private companies, which become part of the publicly traded entity once the sale to a blank-check company is closed. Selling to a SPAC reduces the time it takes to go public by seven or eight months, Moelis & Co. Chairman and CEO Ken Moelis said during a February conference call.

"I believe the SPAC market is real," Moelis said. "I think it's got a regulatory arbitrage to it that is much more efficient than traditional IPOs."

Read our latest M&A analysis and subscribe for quarterly insights: