Over the weekend Kagan fielded its first COVID-19 era U.S. media survey to dig into a number of subjects including what sports fans will watch without live games (26% indicated they will watch nothing) and which streaming services look the most enticing (Hulu LLC topped the response charts).

Netflix Inc., Hulu and the like are widely expected to get a boost from the extra couch time resulting from social distancing. According to our March 27-29 coronavirus flash survey of 1,000 Americans, nearly two in 10 survey takers expected to add a streaming service through June. Just one in 10 planned on dropping one.

For those likely to add an SVOD service, we asked which services were of interest. For paid SVOD, traditional Hulu topped out at 6% of the total base, followed by Netflix, The Walt Disney Co.'s Disney+ and Amazon.com Inc.'s Prime Video. For Virtual Multichannel services, again Hulu topped the group, followed closely by Sling TV.

Separately we asked about usage of "Netflix Party," which enables synchronized video playback and virtual group chat. While the service appears ideally situated for shelter-in-place, it has room for growth with just 3% adoption among Netflix users.

All data is available in the supplemental Excel file here. (Only for clients)

We also asked about ad-based video-on-demand, or AVOD services, which are free to view online video. Considering these do not charge a monthly fee, and in context of a new recession, they could be in for an even greater surge compared to the paid services.

Among our selected list of AVOD services, 20% of survey takers were most likely to try Network TV web sites (e.g. abc.com, nbc.com), followed by Crackle (18%), The Roku Channel and Facebook Inc. Watch (17% each) and Pluto TV at 14%. 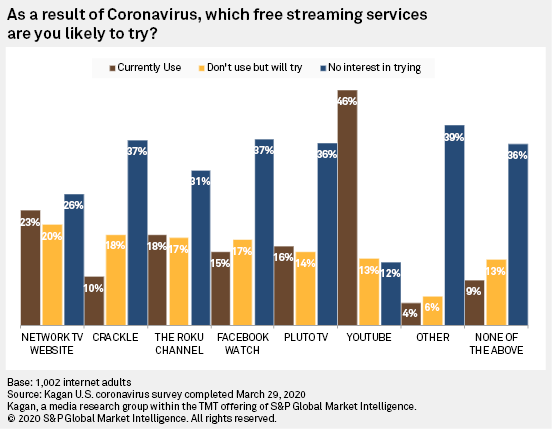 Overall, unsurprisingly, 61% of those surveyed said they were watching more video in the post-COVID-19 world. Live programming led the way. 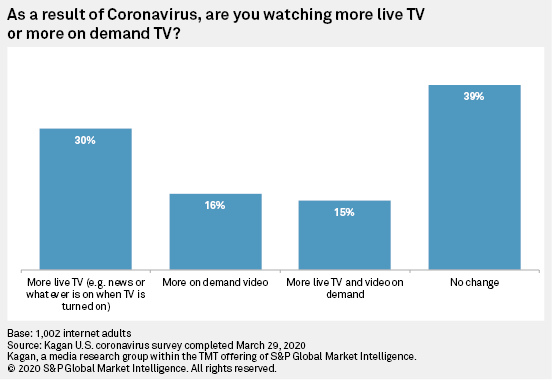 But that live content won’t be sports. With the MLB, NHL and NBA all scaling back, we asked sports fans what they would be watching instead.

About half answered they will keep watching TV, just not sports. Among sports fan respondents, about 24% will watch old games on TV networks and 20% are checking the archives of a digital sports service. Only a quarter of the sports fans would put down the remote and watch nothing in place of live sports. 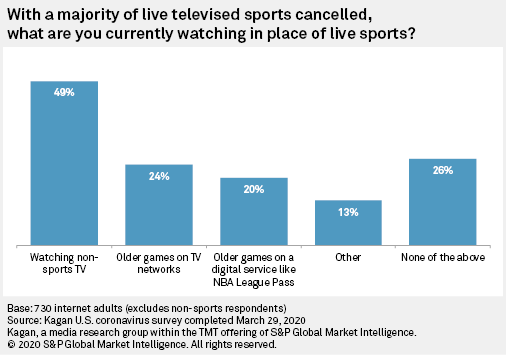 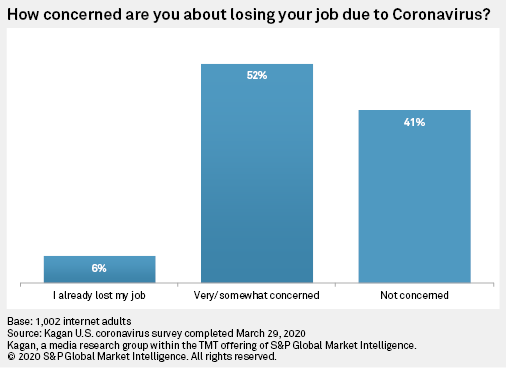 The younger and less money a survey taker made, the more likely they were recently laid off. Those aged 18-22 and those in homes earning under $50,000 annually were almost double the 6% overall average. 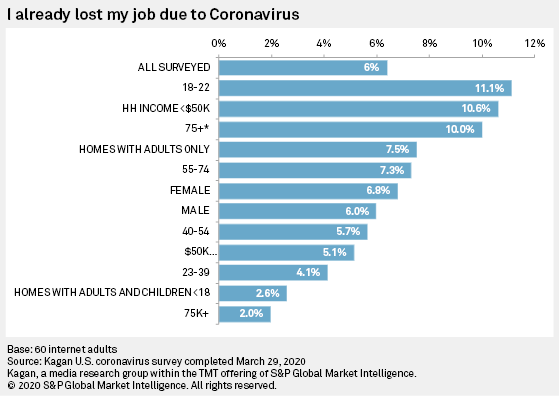 With 52% at least pondering the potential of a job loss, household expenses will come under the microscope. So we asked if coronavirus cost them their job, which of these four bills would be the first to be cut: mobile phone, cable TV, home broadband or streaming video.

Streaming subscriptions were the most vulnerable with 37% opting to drop that bill first, followed by traditional TV service at 28%. The more utility-like home Internet (20%) and mobile phone connections (14%) had more consumer allegiance. 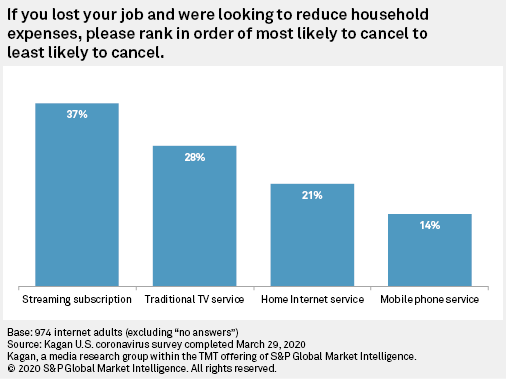 The extra couch time might call for reconnecting the traditional cable cord for some consumers. Of the 430 survey takers who said they did not currently have a traditional multichannel service (e.g. cable, satellite), 59% were unlikely to ante up again. But 25% were at least somewhat likely to sign up with 17% very likely. 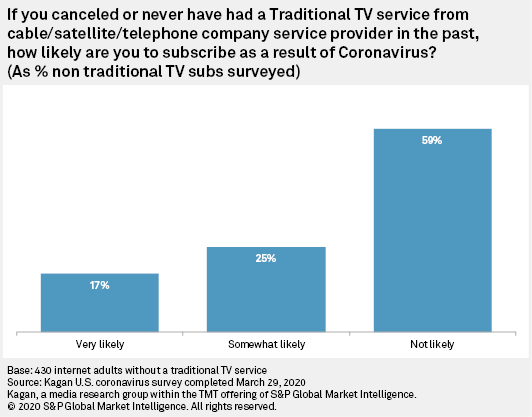 But even reconnecting the cord and multiple SVOD services might not be enough video to satisfy cabin fever households.

So we asked: Would you be willing to pay $20 to watch a new release film at home? Overall, about 29% said yes. But homes with children were far more likely (at 50%) to pay a big premium for a new release. Homes with adults-only and older survey takers were less interested in the idea. 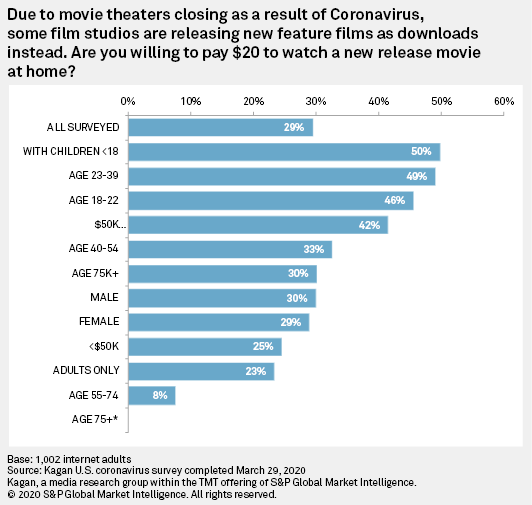 With all the Zoom and Google Classroom upstreaming, we asked about home broadband and Wi-Fi improvements. About 14% indicated they had already increased their broadband tier to handle the extra traffic, with 10% considering it, according to the survey. 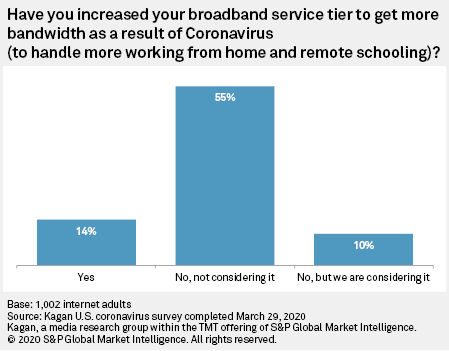 Interest in Wi-Fi extenders was even stronger with 18% answering they had increased Wi-Fi coverage with signal extenders since coronavirus. About 14% of those over the weekend were considering it. 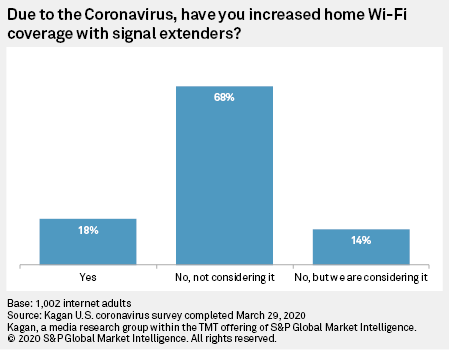 Stay tuned to CI over the next couple of weeks and we dive deeper into these subjects.

Data presented in this article resulted from Kagan's recent coronavirus survey conducted between March 27 and 29. This unscheduled, event-driven survey was designed to measure the impact of the coronavirus outbreak on 1,000 media consumers in the U.S.

READ MORE: Sign up for our weekly coronavirus newsletter here, and read our latest coverage on the crisis here (only for clients).