Kagan Survey – Cable Networks Could Be In For Rough Ride


Kagan Survey – Cable Networks Could Be In For Rough Ride

Cable networks historically have survived recessions with very little damage, but this time could be much different. A recent survey conducted by Kagan, a media research group within S&P Global Market Intelligence, found that if a person lost their job and was looking to reduce household expenses, they were most likely to cut a streaming subscription (37%), followed by a traditional TV service (28%).

That, in tandem with an advertising-market meltdown and another possible COVID-19 outbreak in the fall, could wreak havoc with cable network economics. With unemployment claims coming in record numbers — 22 million people have filed claims in just the last four weeks — it is clear the months ahead will see significant cord cutting as consumers try to scrape together money for food, rent and utilities.

A recent report from the National Multifamily Housing Council, a trade group for the apartment industry, stated that 31% of renters did not pay their rent on time in April.

The 22 million new jobless claims are likely the tip of the iceberg, and the number of people cutting the cord will, in large part, depend upon how fast the $2.2 trillion stimulus package gets into the pocketbooks of American citizens and corporations suffering from the impact of the coronavirus pandemic. The hope is this will get more people back to work and stimulate the economy quickly.

There have been widespread reports of long delays in even getting an application in, let alone getting paid, under plans such as the Paycheck Protection Program, administered by the Small Business Administration. This program gives small businesses a loan of 2.5x their average monthly payroll in 2019 and forgives it if the company can show it spent the loan mostly on payroll. However, the program ran out of money last Thursday, and pending applicants are waiting for Congress to reach an agreement to provide additional funds to the SBA.

We took a look back at the advertising market going back through several recessions and found: 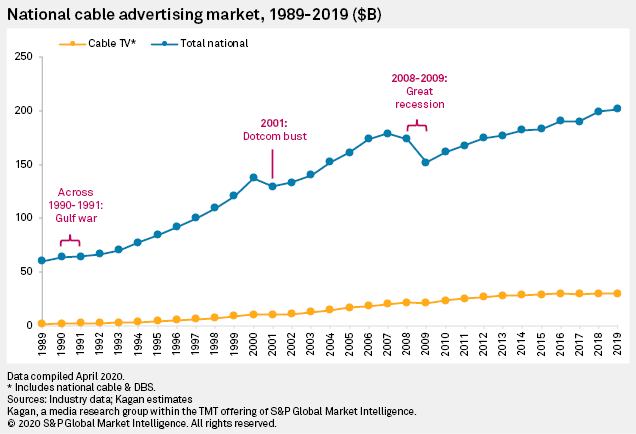 Brief history of recessions since 1990

Referred to as the Gulf War Recession, this one lasted less than a year, from July 1990 to March 1991. Iraq invaded Kuwait, causing oil prices to rise. There was a crisis with savings and loans, and manufacturing was moving overseas under the NAFTA agreement, all contributing to a weak economy.

This recession followed the dotcom boom-turned-bust and lasted from March to November of 2001; also contributing to this was the Y2K scare. The 9/11 attack placed further pressure on the economy.

What is now called the Great Recession ended up being the longest recession since the Great Depression, running from December 2007 to June 2009. Lending to risky consumers and companies caused the subprime mortgage crisis which, in turn, caused a financial meltdown at many banks and other financial institutions.

During the Great Recession, GDP sank 8.4% — a record since the Great Depression — but we are likely to see worse numbers coming out of our current recession due to the complete shutdown of many businesses.

Consumers will likely be cutting nonessential items like cable and satellite, looking for cheaper options such as Apple TV, Disney+, HBO Max, Hulu, Netflix, Peacock, Quibi, etc. Although consumers may find these services softer on the pocketbook, TV and film production has come to an almost complete halt, making it more difficult for streaming services that do not have a deep library they can tap.

Although President Trump and Congress are sending bailout money into the economy at a rapid clip, we believe once consumers cut the cord they will be extremely unlikely to return. This could result in the shutdown of a number of small to midsize cable networks.