Independent system operators mostly composed of single states with aggressive clean energy policies like California ISO and New York ISO are shifting away from fossil fuels toward renewable energy more quickly than those with multiple states that have various policies, such as PJM Interconnection and the Midcontinent ISO. These markets are all focused on electric reliability and have left energy policy up to state governments, but in California and New York the effect of state policies like renewable portfolio standards on the ISO is more direct. If Donald Trump is reelected, the pace of electricity generation decarbonization in the United States will most likely continue to vary by region and be driven by state-level legislation, not federal energy policy.

This approach could be compared to PJM and MISO on a larger scale. If Joe Biden becomes president and successfully establishes a federal policy targeting net-zero emissions during his first term, U.S. power generation trends could begin to look more like CAISO or NYISO in the second half of this decade. To enact this, Biden may have to overcome opposition from the Senate if it remains under Republican control. His administration's policy could also face legal challenges that are ultimately decided by a conservative Supreme Court.

PJM includes all or parts of 13 states and the District of Columbia that have a wide range of clean energy policies. For example, West Virginia repealed its RPS in 2015, but earlier this year Virginia passed comprehensive energy legislation known as the Clean Energy Economy Act, which includes a mandate for the state to phase-in a 100% renewable portfolio standard. Delaware, Maryland and New Jersey are in PJM and also members of the Regional Greenhouse Gas Initiative, a cap-and-trade program designed to reduce CO2 emissions from the power sector. The boom in production of natural gas from hydraulic fracturing has also been driving decarbonization in PJM, where coal plants generated the largest portion of electricity supply until recently.

Projections from S&P Global Market Intelligence's Power Forecast indicate that the trend of coal-to-gas switching in PJM will continue through the first half of this decade, after a brief pause next year due to higher forward gas prices. This allows natural gas to continue growing its market share at the expense of coal, despite modest growth in zero-cost renewable energy generation. However, by 2025 natural gas begins losing market share to renewable energy, and in 2028 renewables are projected to generate more electricity on an annual basis than coal-fired plants. 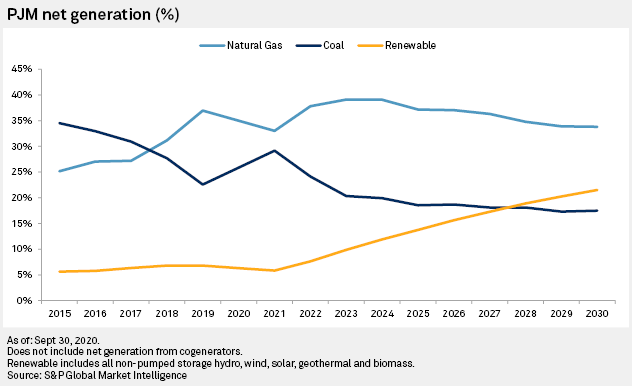 MISO coordinates transmission across all or part of 15 states and the Canadian province of Manitoba. Seven of the states have no legally binding RPS, four have already met their RPS without increasing it further and the remaining four states have RPS that expire by the middle of this decade. The standards for these states are relatively less aggressive than those in some of the states in PJM, NYISO and CAISO. None of the states in MISO participate in carbon emissions markets, and coal still makes up the largest portion of the market's electricity generation.

Market Intelligence Power Forecast projects that coal will generate more of MISO's electricity than natural gas until 2023 and that the market share of natural gas generation will remain stable for the rest of the decade. Renewables market share is projected to grow modestly due to the RPS programs in place, but the pace of this development is expected to slow when these standards are met. Wind generation has a geographic advantage in MISO, which could allow for further growth even in the absence of policy goals, but most of the projected growth in the Market Intelligence Power Forecast is driven by the RPS of Minnesota and Illinois. 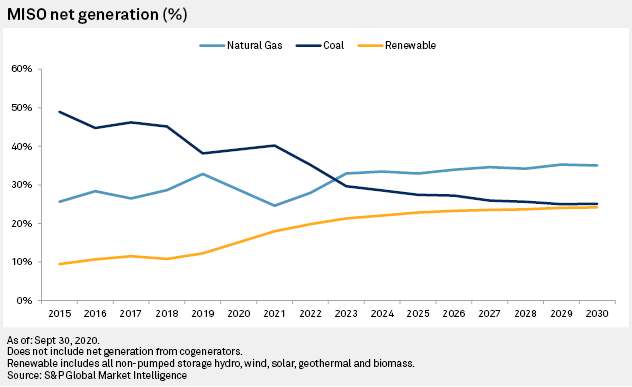 Compared with MISO and PJM, CAISO and NYISO are experiencing faster growth in the market share of renewable energy, and consequently, electricity generation is decarbonizing more rapidly on their systems. State-level policies designed to move away from fossil-fueled electricity toward renewable energy have been the main driver for these changes. California and New York both have ambitious RPS. New York is part of the Regional Greenhouse Gas Initiative and California has its own carbon dioxide cap and trade program. It is easier to see the impact of these policies in CAISO and NYISO, because unlike MISO and PJM, they are regional transmission operators almost entirely composed of single states. ISO New England is also part of the Regional Greenhouse Gas Initiative and although it has multiple states in its footprint, all of them have significant RPS. Consequently, the transition to renewable energy there is expected to look similar to NYISO.

In 2018, California Gov. Jerry Brown signed Senate Bill 100, which elevated the state's existing renewable portfolio standard from 50% in 2030 to 60% in 2030. The bill also enacted a policy that all retail electricity sold to California customers must be generated by renewable energy and "zero-carbon" resources by Dec. 31, 2045. The state is already on track to hit its 33%-by-Dec. 31, 2020, RPS milestone, which does not include large hydroelectric plants. Including large hydro plants that do not use pumped storage technology, annual CAISO renewable energy generation already surpassed the market share of natural gas-fired power plants in 2017. By 2030, Market Intelligence Power Forecast projects that this renewable generation will account for over 70% of the total electricity on the CAISO system. 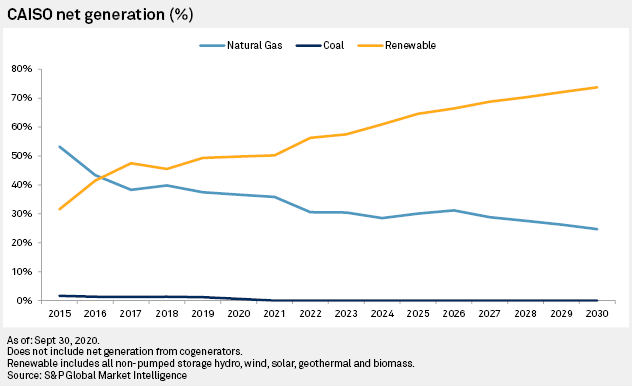 Last year, New York passed the Climate Leadership and Community Protection Act, which increased New York's renewable generation requirement to 70% by 2030. This law also set a target of 100% emission-free electricity generation by 2040 and put in place specific technology procurement targets including 9,000 MW of offshore wind installed by 2035, 6,000 MW of solar by 2025 and 3,000 MW of energy storage by 2030. Large hydroelectric plants are included as eligible resources for the 70%-by-2030 RPS target. Given these aggressive targets, Market Intelligence projects that renewable power generation including all non-pumped storage hydro plants will be greater than natural gas-fired generation in 2022. 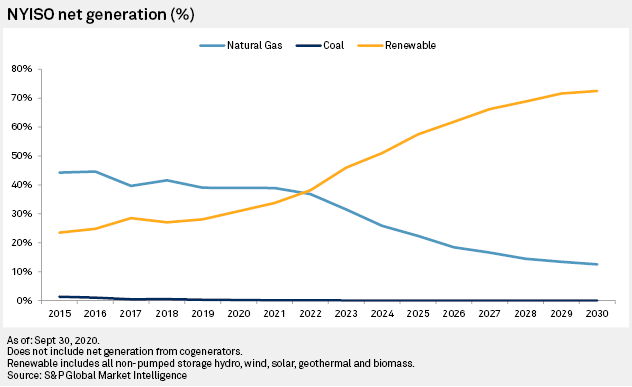 If Biden becomes president, his administration could face multiple hurdles before a federal clean energy policy can be enacted. There could be opposition from the Senate if it remains under Republican control. Also, if legal challenges to the policy are brought before a conservative Supreme Court, it could be struck down. A policy that clears these obstacles could make electricity generation in the U.S. look more like CAISO, NYISO and ISO-NE than PJM and MISO.

If Trump is reelected, the energy transition will continue without central planning, which could slow it down. However, state and regional policies will continue to incentivize renewable energy. It is even possible that carbon pricing in wholesale power markets will expand beyond the Northeast and California. The Federal Energy Regulatory Commission recently issued a policy statement on carbon pricing and PJM has a task force studying the impact of carbon pricing in its footprint.