Internet Traffic Spikes By One Third In March

Broadband usage amidst COVID-19 confinement has increased data traffic by 30% or more in the U.S., proving challenging but manageable for internet service providers.

Comcast Corp. on March 30 disclosed that peak broadband traffic on its network is up 32% since March 1. That said, Comcast Cable Technology, Product, Xperience President Tony Werner on a call with industry analysts the same day said traffic was up 60% in Seattle and San Francisco and that Chicago is following a similar trajectory. Network traffic is now flattening in those early COVID-19 markets, however, according to Werner.

The usage for a collection of small to mid-sized ISPs mirrors Comcast's results. OpenVault, a technology solutions and industry analytics company, reports average usage in the post-COVID second half of March between 8 am and 11 pm rose by 30% when compared with pre-COVID averages in January.

The more granular data bolsters the pattern of a larger increase during the day — 8 am to 5 pm — than in a night time window — 6 pm to 11 pm. Data from OpenVault shows that average day usage in the second half of March rose by 47% when compared with January.

Averages in the entertainment-centric night period are also up, but less dramatically so at 20%. The pattern, which is still well below previous peaks, bodes well for home bound school kids and new telecommuters. However, the averages rose 11% week-over-week, suggesting growing pressure on broadband network as the home isolation stretches into April. 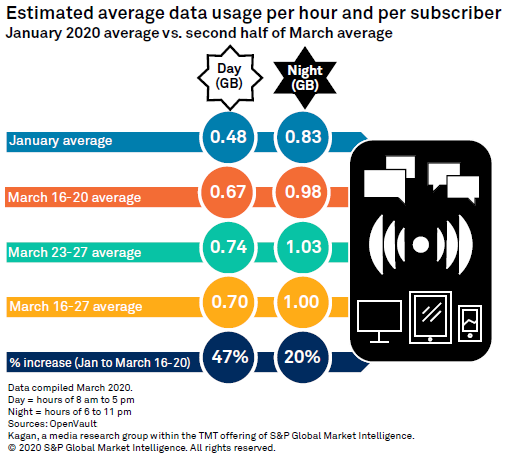 AT&T Inc. has reported a "core" traffic metric, which illustrates similar, though smaller increases to usage. Because the metric includes business usage in the aggregate figure, the increase in consumer traffic is potentially muted by decreases in business customers amid the economic slowdown.

Nonetheless, the company has reported consistent double-digit increases in business, home and wireless traffic, averaging a 25% increase from the same week in February 2020. 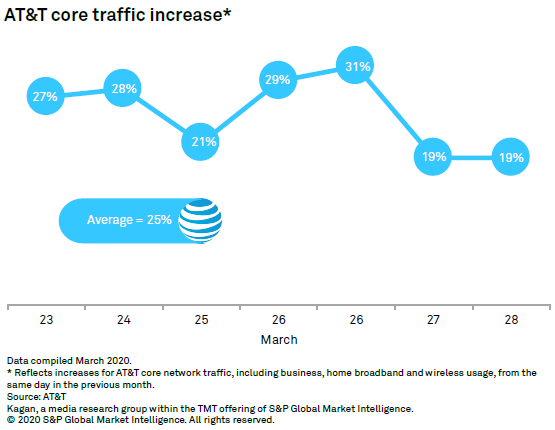 Comcast, on its Xfinity.com platform, reports a median monthly broadband data usage of 220 GB for the second half of 2019, implying a current median metric of 290 GB at the very least.

Applying the 32% jump to the average monthly data usage among broadband-only customers at Altice USA Inc., Charter and Cox Communications Inc. in the fourth quarter of 2019 suggests an average broadband data consumption across the group hovering around 581 GB in March for customers taking only HSD.

Higher data usage, essentially due to greater video streaming consumption, typically is expected among broadband-only households. It bears noting, however, that a share of these households may rely on free over-the-air broadcast signals and, to a lesser extent, on traditional multichannel package from a different platform to fill some of their video programming needs. 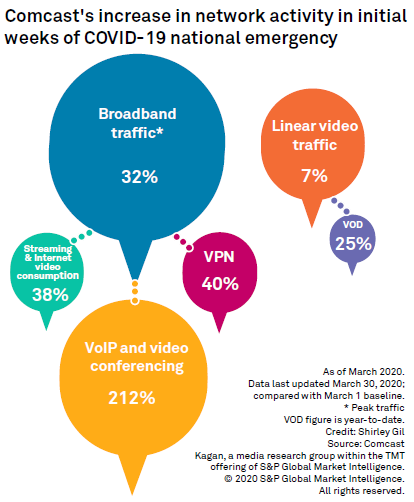 Comcast reports that streaming and internet video consumption is up 38% since March 1. Kagan estimates that the average monthly data usage in the fourth quarter of 2019 amounted to more than four hours of video streaming per day. A 38% jump brings this figure to nearly 6 hours a day, or almost 42 hours a week.

This is linear TV territory; although, Comcast in the company's March 30 presentation said that linear video consumption is up 4 hours a week to a staggering 64 hours.

With a large number of households spread thin between telecommuting, babysitting and online schooling, Comcast video subscribers are turning to voice commands in droves, with voice remote queries topping 50 million some days.

It is not just video that is sending Comcast's network traffic through the roof. Work from home, and what this entails in terms of keeping up with remote colleagues, is fueling a surge in in VoIP and video conferencing usage, up 212%.

Finally, VPN traffic is up 40% according to Comcast.