IPTV operators in India ended 2021 with about 285,000 subscribers overall, down 10.7% year over year, as competing services in the market — such as cable and direct-to-home — offered more affordable and diverse over-the-top options. 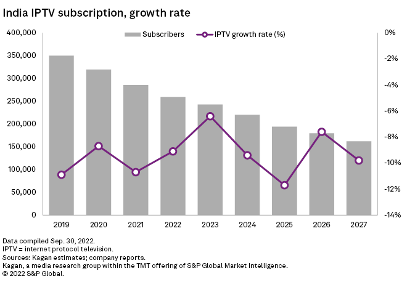 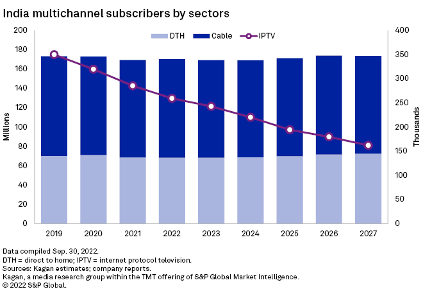 IPTV in India faces market competition from DTH and cable services, which are cheaper and can accommodate features such as OTT add-ons.

Due to the popularity of OTT, top multichannel operators in the country have started to use set-top boxes that allow users to download OTT apps in addition to their subscription to multichannel services. 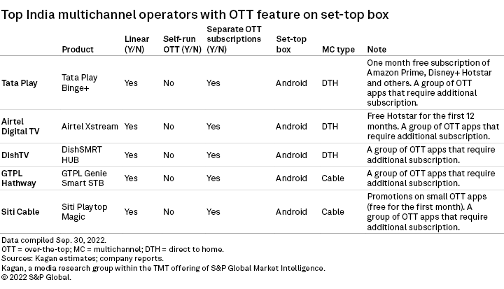 Bharti Airtel Ltd.-owned Airtel Digital TV, the second-largest DTH operator in India, has further developed its online services. In February, Airtel Digital debuted Xstream Premium, a platform offering both DTH linear channels and aggregated OTT channels across a set-top box, an app and a web browser. The operator plans to add more OTT choices to this virtual multichannel, or VMC, streaming platform and to remove the need to subscribe to a DTH service to view linear content on the Xstream portal.

We expect Airtel Digital to attract more customers with the VMC service and bundled sales.

IPTV operators in India have fewer partnerships with OTT services and seldom offer their own streaming options. The leading IPTV service provider, AP State FiberNet Ltd., or APSFL, focuses on the "triple-play" strategy that bundles fixed broadband, IPTV and telephone services. APSFL has been seeking partnerships with OTT services since 2018, but there are no promotions available for users to date. 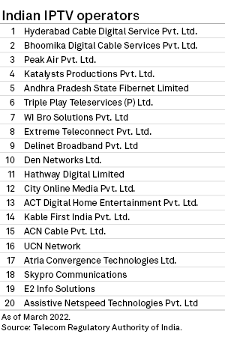 Another factor that prevents Indian TV viewers from migrating to IPTV is affordability.

According to Kagan estimates, Indian IPTV subscribers spent approximately 0.6% of their gross monthly income on the service, while DTH and OTT users spent 0.5% and 0.2% of theirs, respectively, on those subscriptions. This means users of both DTH and OTT could spend 0.7% of their income to pay for two types of service, just slightly higher than the 0.6% share they would spend on a single IPTV service.

Already a client? Click here to read the full report, including detailed overviews of infrastructure’s impact on Indian IPTV development, and comparisons between Indian, Chinese and South Korean multichannel markets.