Fourth-quarter losses for the top operators historically accounting for nearly 93% of the traditional multichannel universe suggest overall sector losses are likely to top last year's record decline by more than 50%. 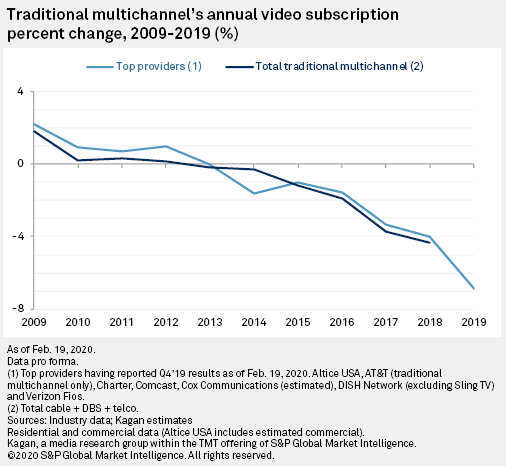 The top operators' fourth-quarter losses contributed to an overall erosion of 6.9% for the group in 2019. This compares to a 4.0% decline in 2018, marking the group's fourth consecutive year of accelerating losses. Of note, removing the largest drag on the listed operators' performance, DIRECTV brings the group's annual decline down to 3.9%, or a 2.5 million drop in absolute residential and commercial subscriptions.

Given the weight of the group in the industry, an overall-universe drop tracking closely to the 7% mark is likely. This would put traditional multichannel losses above 6 million for the year, compared to 4 million in 2018 and 3.6 million in 2017.