The prominence of the Black Lives Matter movement in the aftermath of the global outrage over the killing of George Floyd has again raised questions over the role organizations must play to increase diversity and inclusion in the workforce. The information technology industry is no exception – indeed, it is generally recognized that much more needs to be done to have the IT workforce better represent society overall.

451 Research's Voice of the Enterprise research affords an opportunity to dig into these issues and gain an understanding of what progress, if any, organizations are making. Our most recent VotE: Digital Pulse, Organizational Dynamics survey focuses on these issues. Although the research was conducted before the most recent outrage and focuses chiefly on gender diversity (of the lack thereof) in the IT workforce, it offers some insight into the state of diversity and inclusion efforts at different types of organizations worldwide.

If the first step toward absolution is recognizing and accepting you have a problem, then it would seem that most organizations are at least heading in the right direction when it comes to increasing diversity and inclusion. In technology specifically, we have some ways to go – arguably further than in most other industries. As with the technology vendor landscape itself, women are underrepresented at all levels in the IT department, but particularly in leadership roles. We know that these issues are not restricted to gender. For all sorts of reasons, 2020 is turning into a watershed year, and we will be looking for evidence of an increasingly diverse and inclusive industry in our future survey-based research. We have little alternative.

Additionally, coronavirus is accelerating digital transformation by making all of our lives (and the economy) more digital. Therefore, it's even more important that the people developing the apps, building the technology and designing the UIs be diverse and inclusive – if for no other reason than the women tend to control household budgets and people of color like to buy stuff too. In the digital economy, customer experience rules – and greater diversity in IT means that companies digitizing their businesses have a better shot at getting it right.

The evidence around the positive benefits of promoting greater organizational diversity and inclusion is strong – more diverse organizations tend to be further along with their digital transformation efforts, and economic modeling from S&P Global suggests that greater gender diversity is linked to stronger financial performance. Meanwhile, there are costs associated with doing nothing; there are plenty of examples in AI and elsewhere regarding the negative (often unintended) consequences when technologies are developed by groups of people who do not reflect the composition of their societies.

Let's start with the positive news, which is that most organizations seem to recognize that they have a problem. Our data, taken from our recent Voice of the Enterprise: Digital Pulse, Organizational Dynamics survey, suggests that most organizations – almost 60% – have a formal commitment to improving diversity and inclusion in their workforces overall. This rises to just over three-quarters for large organizations with more than 10,000 employees, and to 84% for organizations with over $10bn in annual revenue, although it is just 44% for SMEs with fewer than 250 staff. Technology leaders also demonstrate a greater overall formal commitment (62% vs. 52% for tech laggards), as do digital transformation leaders (71%, vs. just 46% for DT laggards).

If this raises hopes of a more diverse and inclusive future, it is tempered by the picture that our data paints of the reality in many of today's IT departments, which is more sobering.

We asked about the gender composition of the IT workforce in organizations today. The fact that a demographic that accounts for half of the population only represents an average (mean) of 28% of an organization's full-time IT employee base is not encouraging, although perhaps not surprising. It's also virtually unchanged from a year ago. More worrying, 8% of respondents said they had no women at all in the full-time IT staff, with a further 39% stating that women account for less than one-quarter of the IT staff. Once again, the lack of diversity was most pronounced in smaller organizations and late technology adopters – for example, just 3% of DT leaders said they had no full-time women on the IT staff, versus 15% for DT laggards. 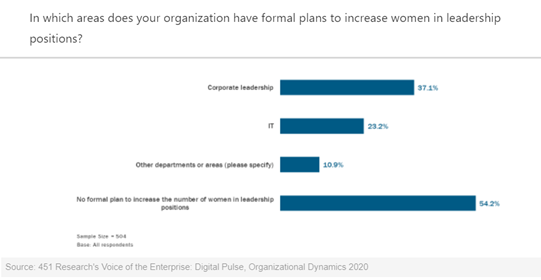 This data also prompts further questions. In particular, how can 60% of organizations have a formal commitment to increasing diversity, yet more than half say they have no formal plans to increase the number of women in leadership positions? It could be that many of these formal commitments to increase diversity and inclusion are in an early phase, and beyond a general commitment have not yet translated into specific goals for specific under-represented groups (e.g., women, minorities, etc.). Or it could be that beyond the broad strategy, employees (respondents) do not know or understand how organizations are translating these goals into actions for specific groups. If the former, that is understandable, although we would be looking for signs of improvement here in subsequent surveys. If the latter, that would be more concerning, since it would suggest that such strategies are not being clearly communicated, are not being taken seriously or (worse) both. We will strive to understand this picture better ourselves in upcoming research.

The Changing Face of Tech