With India being under lockdown since late March, speakers at this year's Future of Video India virtual seminar held Sept. 10 discussed how the video industry has evolved during the COVID-19 pandemic.

It was the general consensus that the pandemic has accelerated the growth of digital platforms, which would have otherwise taken years to achieve. Discovery Communications India and Disney Broadcasting (India) Ltd. had timely launches of their streaming services Discovery+ and Disney+ Hotstar in India in March and April, respectively. As of June 2020, the Disney+ Hotstar service was reported to have served 8.6 million subscribers.

Facebook India Online Services Private Ltd.'s Director and Head of Partnerships in India Manish Chopra said video consumption accounts for 70%-80% of smartphone internet usage in the country and 1.25 billion Indians watch videos on Facebook. Live content on Instagram LLC has increased by 60% compared to pre-COVID-19 times. Chopra added that 95% of videos on the platform are in original languages that help to engage users. Business Standard Ltd.'s Consulting Editor Vanita Kohli-Khandekar thinks it is a challenge for linear channel operators to provide multiple language options given that the country has 22 official languages. Digital platforms, on the contrary, would have more capacity in terms of language selections.

The traditional multichannel pay TV sector is anticipated to grow in 2020 as well. Our data estimates the number of multichannel subscriptions in India will reach almost 180 million by the end of 2020, an expected increase of 3.2% year over year. TV subscription revenue is projected to near $6 billion in the same time period, up by 2.2% from 2019. Cable TV will likely still dominate the multichannel landscape with a 58.2% subscriber share and a 55.3% revenue share. However, strong direct-to-home competitors could put increasing pressure on cable operators and erode cable's slice of the pie. 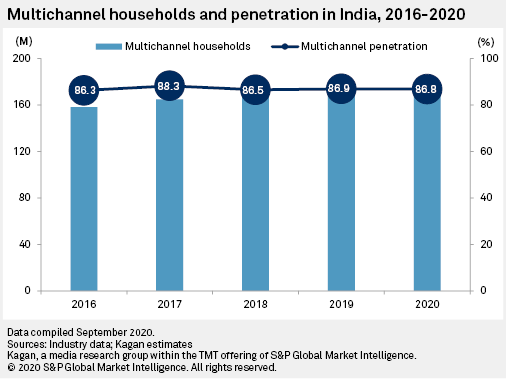 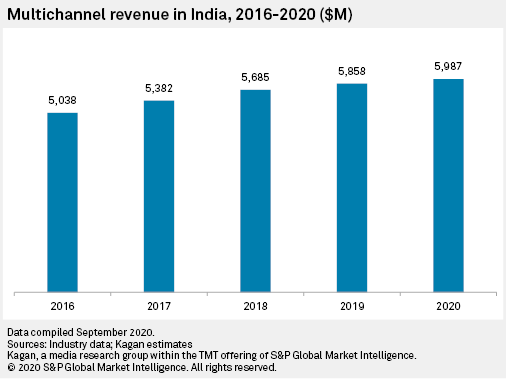 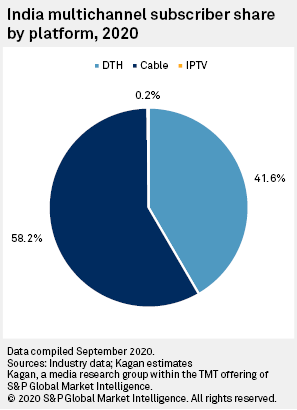 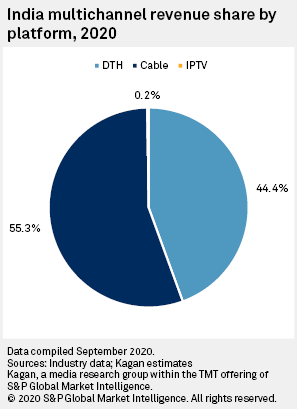 TV consumption surged by 43% in the first week of the nationwide lockdown, according to Sunil Lulla, CEO of Broadcast Audience Research Council. Lulla believed the pandemic will boost TV penetration in the country, where approximately 100 million households do not own a TV set. Tarun Katial, CEO of Zee Entertainment Enterprises Ltd.'s ZEE5 India, expects viewing habits of part of the Indian population will shift from mobile to TV. Given that smart TVs have become more affordable, the lockdown is an opportunity for people to get used to a better viewing experience on the large screen. Katial forecasts this will boost broadband subscriptions and demand for premium subscription video-on-demand content in the long run.

Gourav Rakshit, COO of Viacom 18 Media Private Ltd.'s Viacom18 Digital Ventures, said Indian subscribers are generally very value conscious and would quickly drop a service if it were not worth the money. Our model shows that India's video subscription ARPU will remain approximately $3 per month in 2020, one of the lowest across the Asia-Pacific region.

Although TV advertising dipped by 15%-20% in March, Kranti Gada, COO of Shemaroo Entertainment Ltd., believed it was the right time to launch free-to-air general entertainment channel Shemaroo TV in May. To connect with more audiences through digital platforms, simulcast of the channel was offered on its Facebook page for one week.

For a more detailed analysis of India's multichannel and over-the-top video markets, please refer to its profile here.