Despite the overall trend of subscriber declines, total distribution revenues reported by the eight publicly traded cable network owners tracked by Kagan for the quarter ended June 30 grew by 4.2% to $10.26 billion, due in large part to built-in contractual rate increases.

Walt Disney Co. led all cable programmers in terms of year-over-year distribution revenue growth, up 7.0% to $3.56 billion. Note that affiliate results for Disney includes revenues from the company's broadcast network ABC. The consolidation of FX and National Geographic cable networks provided a big boost to Disney's affiliate fees for the first full quarter since closing its acquisition of a wide swath of 21st Century Fox assets in March. Similar to most cable programmers, Disney's affiliate revenue growth was driven by higher contractual rates, partially offset by decline in subscribers. An analysis of Nielsen data for June indicates Walt Disney Co.-owned networks including networks under A&E Networks experienced universe estimates declines of 3.0% year over year. 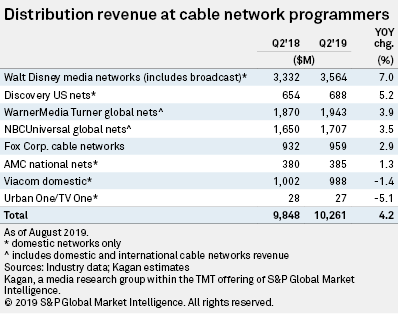 On Disney's earnings call, Chairman and CEO Bob Iger acknowledged the company's live multichannel television product has been the most affected by disruptions in the current media landscape, but he also noted it remains an important business. He explained Disney's increased focus on the direct-to-consumer space allows the company to pivot quickly in case the traditional side erodes significantly.

Discovery has been one of the most aggressive cable programmers in terms of expanding its network carriage on all major virtual multichannel services except AT&T Inc.'s DIRECTV NOW. The company launched eight cable networks on YouTube TV with OWN slated to launch by year-end. Discovery also signed a multiyear live and on-demand carriage agreement with fuboTV.

FOX negotiates its broadcast and cable carriage contracts in one bulk group. On the earnings call, CEO Lachlan Murdoch shared that their focus on negotiations would be to get a greater share from retransmissions, which means affiliate growth will be coming from the broadcast segment rather than the cable segment moving forward.

Cable networks continue to feel the negative effects of cord cutting and cord shaving during the quarter. The group of 117 basic cable networks rated by Nielsen in June logged a universe estimates decline of 2.9% year over year.

Among the eight publicly traded cable network owners that we tracked in this analysis, Viacom Inc. registered the biggest aggregate subscriber decline at the end of the quarter, with universe estimates down 6.5% in June, based on Nielsen data. Viacom's distribution revenue dropped 1.4% year over year to $988 million. The company continues to extend its audience reach on multiple platforms by licensing both its networks and content to traditional and virtual multichannel distributors, subscription video-on-demand services, mobile apps and other free streaming platforms. Viacom will also be launching its BET+ SVOD service as a joint venture with producer Tyler Perry this coming fall.

During Viacom's earnings call, President & CEO Bob Bakish shared that the company has renewed the majority of its carriage agreements under its "partnership-first" strategy, wherein Viacom offers traditional operators lower rates as linear ratings continue to drop. One recent example is the new distribution agreement that the company locked up to keep its networks on more than 750 cable operator members of the National Cable Television Cooperative.

Management expects distribution revenues to grow in the low single digits at the end of the year as Viacom reaps the benefits of baked-in price escalators, content licensing and growth from the virtual multichannel video programming distributor side. A few days after the earnings call, CBS Corp. and Viacom announced an agreement to recombine as ViacomCBS.

Urban One Inc. reported the biggest revenue decline from the group as affiliate fee revenue for TV One dropped 5.1% to $27 million due to a tough year-over-year comparison. During the same period in 2018, the network received a $2 million settlement payment from an unnamed operator, which inflated affiliate revenue results. We estimate, however, the network was able to grow actual affiliate fee revenue by 2.2% in the quarter through a rate increase of 5.0%, which was partially offset by a 2.7% decline in subscribers. Urban One also owns new cable network Cleo, but it is a free-to-carry channel and contributes to the company's financial results via advertising revenues.

Overall, distribution revenues continue to be the dominant revenue stream for most of the publicly traded cable network owners except for Viacom and Discovery. 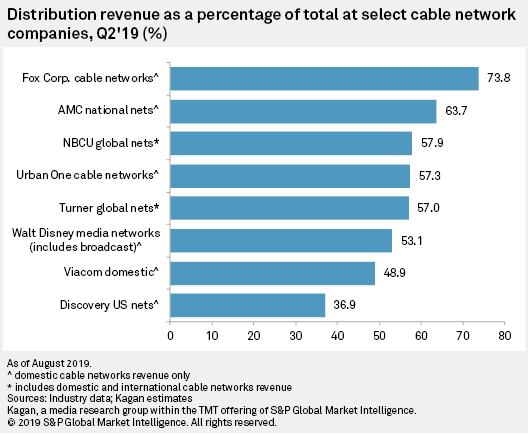