Cash flow margins for cable networks are not expected to contract significantly — to 37.4% in 2020 from 38.0% in 2019 — in large part because contracting ad revenue and flat-to-shrinking affiliate fees have been offset by reductions in selling, general and administrative as well as programming costs.

There is only so much that can be cut, however, and by 2024, we estimate that the average cash flow margin for basic cable networks will shrink below 30% for the first time since the industry broke through that barrier in 1998. 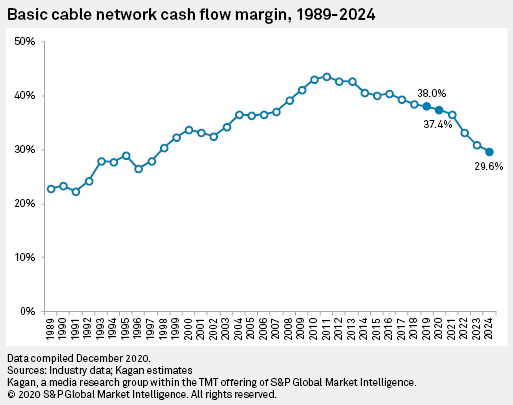 Still, the industry will suffer from a significant decline in cash flow despite all the cost-cutting efforts, with total industry cash flow estimated to be down 8.1% in 2020, corresponding to a loss of $2.07 billion. 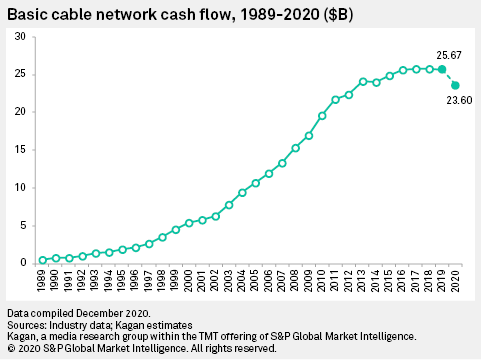 Not helping is the slide in multichannel, and even virtual platforms, which is causing revenue growth to slump, and cash flow on a per-subscriber basis is decreasing for some channels. As the graphic below shows, after rising for several years, this metric has declined slightly, from $2.82 in 2018 to $2.81 in 2019 to $2.80 in 2020. 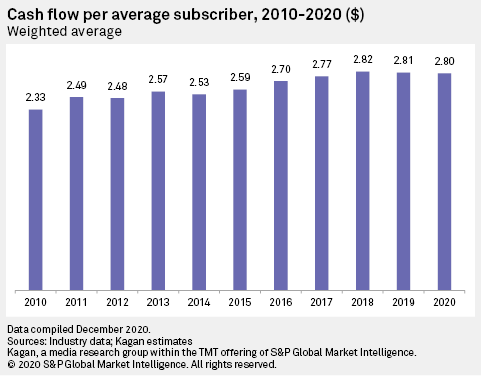 No other networks that we analyzed came in at over $10 per sub. The average of the top 20 is $9.21/sub, which is more than three times the industry weighted-average of $2.80/sub.

Looking at the bottom 20, there are a number of networks generating negative cash flow and quite a few generating between 0 and 14 cents per sub, which is only 5% of the industry average. We believe many of these channels will go dark over the next several years as the trend of cord cutting and cord shaving continues. In fact, El Rey has announced Dec. 8 it would go dark Dec. 31.