With the numbers of coronavirus cases fluctuating from day to day and the ebb and flow varying widely from state to state, utilities and their regulators are scrambling to decide whether to end or extend moratoriums on service disconnections that have been in place since March and how to address recovery of the related costs. 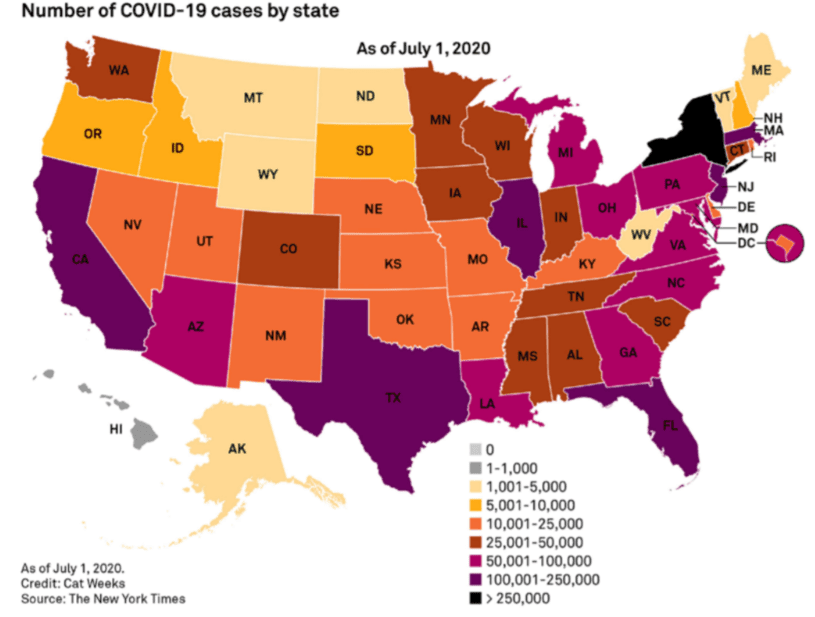 Moratoriums were implemented in all 53 jurisdictions followed by Regulatory Research Associates, a group within S&P Global Market Intelligence. The moratoriums are/were voluntary in about 19 jurisdictions and mandated by the governor, legislature or regulatory commission in the remaining 34.

As of July 20, moratoriums on service disconnections had been lifted for all customers in eight jurisdictions.

In 12 states, target end dates have been established that range from as early as July 25 to as late as Sept. 14. Notably, many jurisdictions have rules in place that prohibit utility shut-offs during the "winter heating season," and in some instances, the season may begin as early as September. 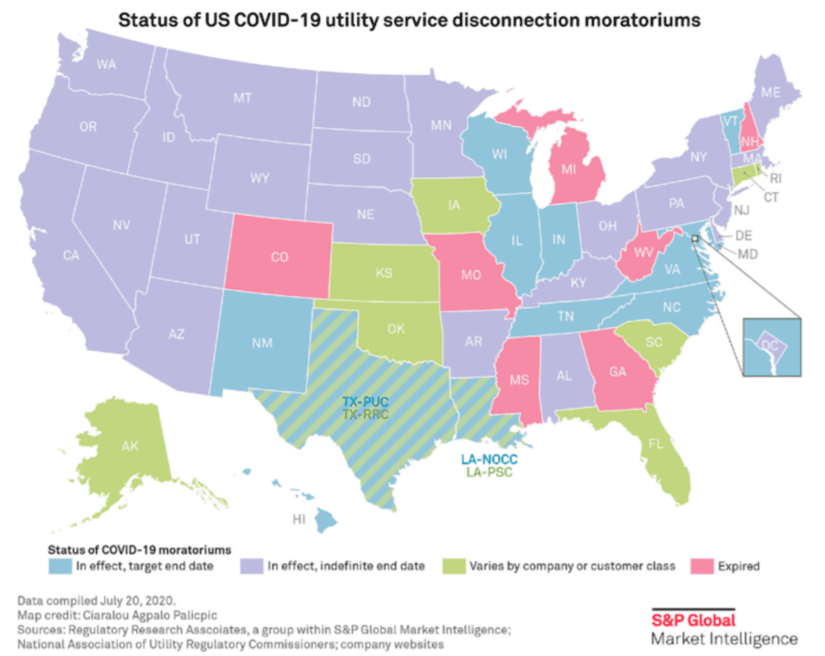 In nine states the application/duration of the moratorium varies by company or by service class and in some instances, the moratoriums have been lifted for some customers.

In the remaining 24 states, moratoriums remain in place with no definitive end date established.

The magnitude of COVID-19 related costs to be recovered and the degree of difficulty regulators and companies will face in addressing recovery of these costs will be impacted by a variety of factors including, but not limited to, the severity of the outbreak in the utility's service territory, the duration of the related state of emergency declared by the governor, the timing and duration of a transition to "normal," the level of unemployment, non-pandemic-related capital spending plans, the individual company's sales and revenue mix, and the type of regulatory mechanisms that are already in place to address extraordinary costs and/or revenue volatility.

Indirect costs include higher incidence of bad-debt/uncollectibles costs relative to the normalized amounts reflected in base rates and lost revenues due to business closures caused by stay at home requirements and the pandemic-related recession. All things considered, direct costs, while not immaterial, are expected to be less substantial and less controversial than the indirect costs. The magnitude of the indirect costs may not be known for some time as the economic impacts of the pandemic will likely persist after the crisis subsides. 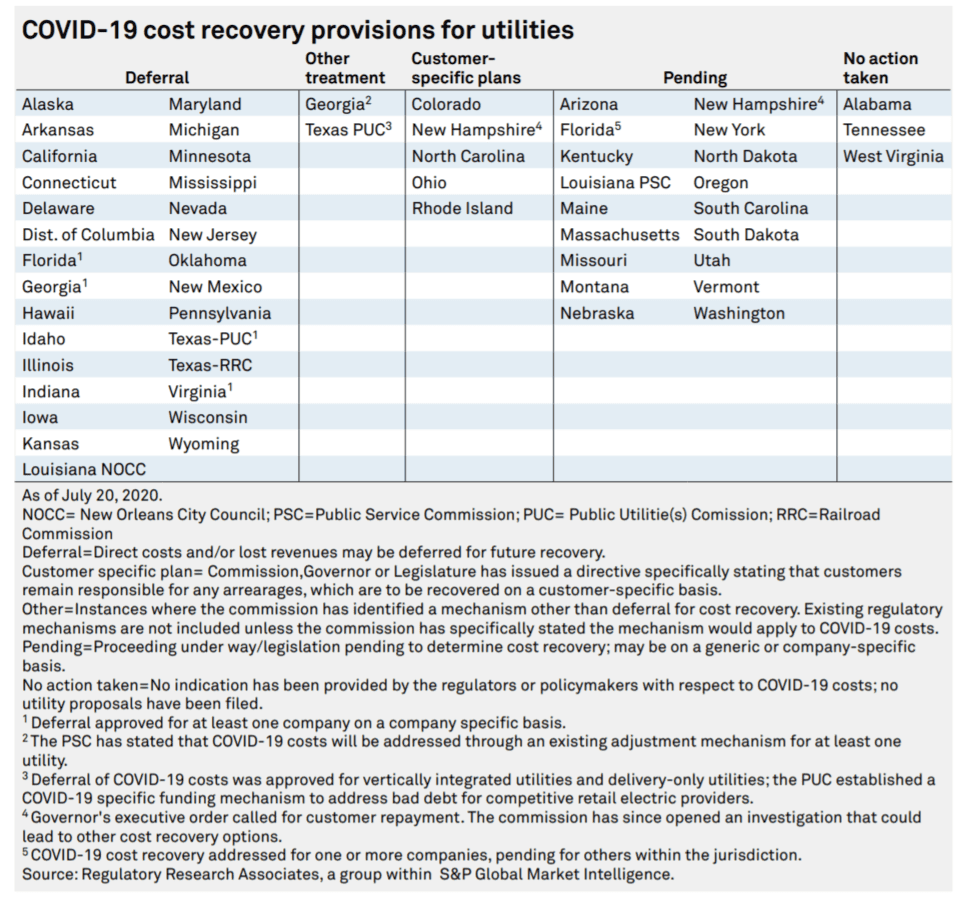 Thus far regulators in 29 jurisdictions have allowed at least one company to defer costs associated with the COVID-19 pandemic and the related moratoriums. In many instances, the directives lack specificity as to what costs are eligible for deferral. By and large, where the commission has specified the categories of costs that may be deferred, direct costs and incremental bad-debt/uncollectibles costs have been included. The issue of lost revenue has been more controversial.

Recovery of the amounts deferred will be addressed, on a company-specific basis, either through a base rate case or an issue-specific proceeding. Deferral is an interim remedy that generally allows the company's earnings to remain whole, while the commission considers whether or not unanticipated costs should be treated as "extraordinary" and recovered, or considered "normal" volatility in utility costs that are part and parcel of the traditional regulatory process.

The costs will be subject to prudence review before recovery begins. Commissions nationwide have used this methodology for various other types of costs, including storm costs and pension costs. Recovery generally occurs over several years, and the commission may or may not permit the utility to earn a return on the unamortized balance during the recovery period. Securitization has also been used in many instances to address the recovery of these types of deferrals.

It is important to note that utilities in virtually all states have implemented some type of flexible payment arrangements, in some instances extending repayment plans for as long as 24 months, and this is generally the first avenue the companies must explore for recouping arrearages associated with the pandemic. While these plans are in force, the unpaid portion of customer bills is booked as deferred revenue. These amounts would not be considered bad-debt, and eligible for deferral, until or unless the customer is unable to meet even the more liberal payment options the utility has offered.

Nevertheless, RRA has identified five jurisdictions where the state governor, legislature or commission has issued a definitive statement that the moratoriums do not absolve the individual customer from responsibility for repaying arrearages accrued during the moratorium on disconnections, implying that the policymakers would not be amenable to allowing the utilities to defer these amounts for potential recovery from all ratepayers.

Proceedings to address COVID-19 cost recovery issues are pending in 18 jurisdictions and no discernible action has been taken in three jurisdictions.

Notably, in Alabama, the companies operate under comprehensive formula ratemaking paradigms that may "automatically" address the financial impacts on the utilities of COVID-19, including lost revenue. These types of mechanisms are also in place for one or more utilities in 13 other jurisdictions and these plans may provide the opportunity for more expedited recovery of COVID-19 costs and lost revenue. While these mechanisms may include limits on the amount of the rate change that may be implemented in a given year, amounts in excess of the cap are permitted to be deferred as part of the process.

Regulators in 22 jurisdictions have approved full revenue decoupling mechanisms for at least one utility. These mechanisms, which allow for adjustments to reflect fluctuations in sales caused by weather, energy conservation and overall economic conditions, are more prevalent for gas than electric companies.

Similar to the formula-based ratemaking plans, these mechanisms may contain caps on the annual adjustments that may be implemented, with amounts above the cap to be deferred. In addition, in some instances, the plans may apply to only certain customer classes and not others. Nevertheless, assuming the mechanisms are allowed to function without amendment, they should provide some degree of mitigation for COVID-19 related dips in sales.