As Coronavirus Shutters Theaters, How Low Will 2020 Box Office Go?


As Coronavirus Shutters Theaters, How Low Will 2020 Box Office Go?

The domestic box office year started with great promise as weekly box office posted growth in six of the first seven weeks of 2020. While things were going well in the U.S., the coronavirus was severely impacting international markets, particularly in China, where billions of box office dollars have been lost amid theater closures.

International theater closures prompted studios to delay releases of some of their major films. The most notable of these are "No Time to Die," moving from April 10, 2020, to Nov. 25, 2020, and Disney's "Mulan," which was pulled from its March 27, 2020, release date.

The tide began to turn in late February/early March when domestic weekly box office dropped about 12% in weeks eight and nine before falling 45.3% in week 10 as fear of the coronavirus began to spread. Finally, in week 11, the domestic box office plummeted 57.3% to $88.7 million and had one of the worst weekends in decades.

Shortly after the box office drop, the government announced guidance regarding social distancing to help stop the spread of the coronavirus. Theaters responded by reducing auditorium capacity to 50%. The government then updated its guidance to keep gatherings to 10 people or fewer, and theaters were forced to make the difficult — and unprecedented — call to close all of their theaters. AMC Entertainment Holdings Inc., Regal Cinemas Inc., Cinemark Holdings Inc. and many other theater chains have closed their doors for an undetermined amount of time. AMC was the only theater chain to provide a possible timeline of six to 12 weeks.

Sony Pictures is following suit by releasing "Bloodshot," which debuted in theaters March 13, 2020, for purchase on digital platforms March 24, 2020. Chances are, most studios are going to hold on to their films and give them a new theatrical release date when theaters reopen.

In the next scenario, we used the same percentages for calculating declines in admissions but altered the rebound in 2021. In 2021, we assumed admissions would only be 75% of what we considered a full recovery in the previous scenario. There could be lingering hesitancy to return to theaters, leading to lower attendance. Numerous films could also have halted production because of the coronavirus. If film productions experience a significant delay, there may not be enough films in theaters to draw back large crowds. In this scenario, total 2021 box office would only climb to nearly $8.51 billion and make 2020 and 2021 the two lowest-grossing years since 2000 at $7.55 billion and 2001 at $8.14 billion. 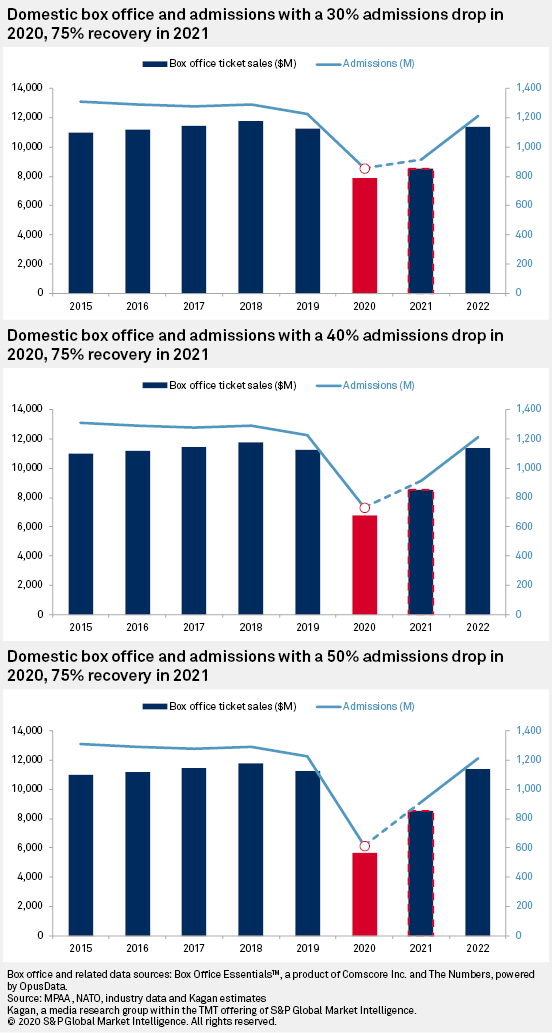 The final scenario is probably what could be considered the best-case scenario: 2020 admissions would only drop 20% as theaters close for no more than six weeks, most major releases would be rescheduled for later in 2020 and production on new films resumed without significant delays. This could also lead to a few major hit films getting added to the 2021 calendar, like Universal already did with "F9," thereby helping to propel 2021 box office to a record high of approximately $11.92 billion. 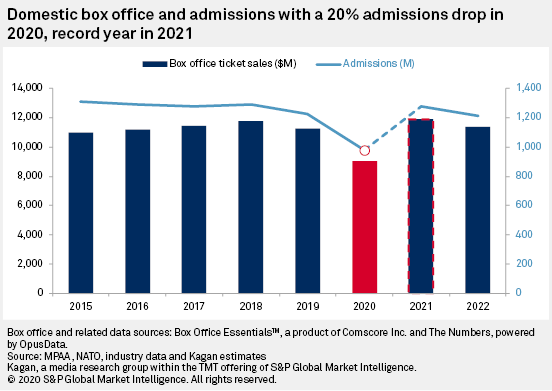 AMC closes all US theaters over coronavirus concerns