The IMF concluded its visit to Ghana on Oct. 7, whereafter Ghana began talks with its domestic bondholders to restructure its local currency debt.

We expect that some degree of domestic debt restructuring will be pursued to ensure debt sustainability ahead of IMF support. The IMF is likely to recommend limiting this to reduce the risk of financial sector distress and the government needing to recapitalize affected institutions. This circular process would offset the debt-sustainability benefits of restructuring.

Instead, domestic debt restructuring is likely to form part of a broader macroeconomic plan to restore overall debt sustainability. We believe Ghana is more likely to seek comprehensive debt treatment under the G20 Common Framework.

A domestic debt restructuring would significantly impact local banks, given their elevated exposure to government securities. It also would directly impact banks' capital buffers, which would probably trigger significant financial instability and make government support necessary for systemically significant banks. The sector's resilience to a domestic debt restructuring is limited by its already very-elevated impairment levels. The projected slowing of the economy will further constrain borrowers' debt-service capacity. 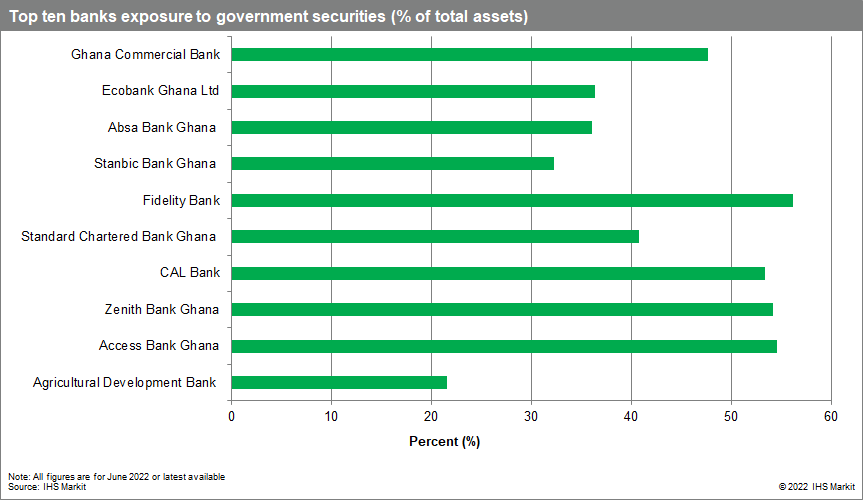 A domestic debt restructuring could also lead to higher funding costs for banks. Sovereign risk rating downgrades for Ghana by major rating agencies are already increasing funding costs for the country's banks. As investors assimilate the increase in risk and foreign investments are withdrawn, this will translate to higher borrowing costs for both government (due to its reliance on banks for funding) and consumers, putting pressure on credit loan extension.

Any issues identified by the IMF over non-transparent disclosure by the Ghanaian authorities on the total volume of the state's liabilities - a problem in prior rescheduling of debt by Mozambique and Zambia - would delay the conclusion of an IMF program for Ghana. Contingent liabilities to Chinese entities would represent a particular area of sensitivity.

The release of new IMF funding would only be likely once the Ghanaian authorities have disclosed the full stock of the state's liabilities and the government has made tangible progress with its creditors towards re-establishing debt sustainability.

To achieve this, debt restructuring does appear likely. This will probably focus strongly on international liabilities - already discounted by its dollar bond prices - to both official and private-sector creditors.

Domestic debt restructuring cannot be ruled out, especially given the very high nominal cost of cedi-denominated government debt. Still, it is likely to involve some caution to avoid triggering a self-defeating 'doom loop' affecting the domestic banking sector's solvency and stability. Instead, we see the G20 Common Framework as the core of Ghana's future debt rescheduling.