Should investment results be attributed to skill or luck? Genuine skill is likely to persist, while luck is random and fleeting. Thus, one measure of skill is the consistency of a fund’s performance relative to its peers or to its benchmark. The Persistence Scorecard shows that regardless of asset class or style focus, active management outperformance is typically short-lived, with few funds consistently outranking their peers or benchmarks.

Recent years have blessed (or cursed) financial markets with plenty of volatility and narrative regimes. From a slow interest-rate-hiking cycle through the chaotic drawdown of the initial COVID-19 pandemic lockdowns,to a market powered by large technology companies and later extending to other sectors as the world re-emerged, this environment provided an excellent test of true fund management skills and adaptivity.

Sadly, what worked in one period was unlikely to persist in the next. Exhibit 1 shows that the top quartile funds in the 12-month period ending in June 2019 continued to succeed over the next year—perhaps because many of the winners of the late pre-pandemic expansion were often the same companies that benefited the most immediately following the lockdown. However, as the economy continued to recover, the rest of the market caught up, and those superstar funds quickly reverted to the mean. Within two years, a mere 4.8% of these June 2019 domestic equity winners remained in the top quartile (see Report 1a). 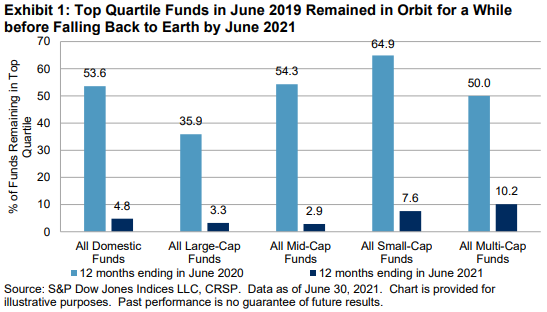 Even expanding the definition of success to simply beating the median fund’s return, fewer than 27% of any equity category’s top-half funds in June 2019 managed to stay in the top half through June 2021 (see Report 1a).

Widen the time horizon to five years, and the picture looks even more bleak. Even in the best category for persistence, just 3.2% of multi-cap funds managed to stay in the top quartile for each year. Mid-cap funds were especially disappointing, with no funds accomplishing that feat (see Report 2).

Some statistically minded readers might note that these numbers are occasionally better than what would be expected if fund performance was randomly distributed. For example, the odds that a top-quartile fund in one year could remain in the top quartile for the next four consecutive years might be calculated as (25%)4 = 0.39%, and the 3.2% referenced above is substantially better than that. While the persistence report does not prove that fund performance is completely random, from a practical or decision-making perspective, it reinforces the notion that choosing between active funds on the basis of previous outperformance is a misguided strategy. After all, there remains a 96.8% chance that a top-quartile fund will not stay in the top quartile for the next four years.

Another way of evaluating performance persistence is by comparing fund performance against their benchmarks. We first identify funds that beat their benchmarks in the one-year period ending in June 2019, net-of-fees. We then examine whether these funds continue to outperform during each of the next two one-year periods. Our result shows that past outperformance did not typically help identify superior performing managers in the future.

Previous SPIVA U.S. Scorecards showed that 36.8% and 41.8% of all large-cap funds outperformed in the 12-month periods ending in June 2020 and June 2021, respectively. An investor choosing funds randomly might thus expect a 36.8% * 41.8% = 15.4% chance of picking a fund that would outperform for two consecutive years, higher than the 12.3% realized—reinforcing the notion that fund alpha is likely fleeting.

Unsurprisingly, the one pattern that did hold across equity funds was the tendency of the poorest-performing funds to close. Fourth-quartile funds were almost always the most likely to merge or liquidate over the subsequent three- and five-year windows, with 52% of the bottom-quartile mid-cap funds from the June 2011–June 2016 period disappearing by June 2021. In fact, closing their doors was the most likely outcome in four out of five equity categories for fourth-quartile funds in that period (see Report 5).

Style changes did not appear to be particularly correlated with fund performance. Top, middle, and bottom performers within a category all generally had similar chances of style drift over three- or five-year periods. Multi-cap funds had the highest percentage of style change, with 28% making a change over three years and 41% over five years (see Reports 3 and 5).

Fixed income funds showed similar results to equities, with pockets of one-year persistence decaying over longer periods. In 8 of the 13 categories considered, no top-quartile funds from June 2017 maintained that status annually through June 2021 (see Report 8).

Transition matrices showed slightly more evidence of fixed income fund persistence. Over the five-year horizon, in 6 of the 13 categories, 50% or more of top-quartile funds remained in the top quartile. However, there were only two categories with greater than 20 funds that qualified within each quartile, perhaps leading to small sample size effects (see Report 11). 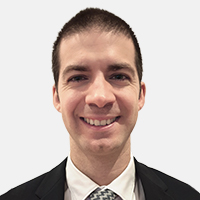 As the global economy bounced back from the COVID-19 crisis, oil income started to ramp up again for the Middle East and North Africa (MENA) countries.  With successful vaccination campaigns and effective fiscal policies and reforms, economies in the MENA region continued to recover.  Expectations of steady growth reflected onto stock market trends in the region during the first half of 2021.

S&P Dow Jones Indices has been the de facto scorekeeper of the ongoing active versus passive debate since the first publication of the S&P Indices Versus Active Funds (SPIVA) U.S. Scorecard in 2002.  The SPIVA Europe Scorecard measures the performance of actively managed European equity funds denominated in euro (EUR), British pound sterling (GBP), and other European local currencies against the performance of their respective S&P DJI benchmark indices over 1-, 3-, 5-, and 10-year investment horizons.

As COVID-19 disruptions lessened due to successful vaccination rollouts in Europe, the first half of 2021 was characterized by a bullish and low-volatile stock market.  In this period, active funds generally struggled to keep up with their benchmarks.  However, over the one-year timeframe, a larger percentage of active funds outperformed.

The Canadian market, like many of its counterparts around the world, soared upward during the past year despite the COVID-19 pandemic. The S&P/TSX Composite gained 33.9% for the 12-month period ending on June 30, 2021, and the smaller-cap names of the S&P/TSX Completion did slightly better, with a 35.3% gain.

Unlike many previous reports, where the performance of active funds has been similar across categories, at mid-year 2021 there was a wide spread of outcomes. For example, 60% of Canadian Equity funds and 98% of Canadian Dividend & Income Equity funds fell short of their respective benchmarks over the past 12 months. However, just 15% of Canadian Small-/Mid-Cap Equity and 23% of Canadian Focused Equity funds underperformed over the same timeframe (see Report 1).

Even for the most recent outperformers, however, the longer-term picture remains unfavorable. Canadian Focused Equity funds were the worst-performing category over the past 10 years, with 96% of funds failing to clear their hurdle rate. Canadian Small-/Mid-Cap Equity funds— technically the best-performing category over the past 10 years—had 62% of funds trailing the benchmark.

The level of out- and underperformance also showed wide spreads over the past year. On an equal-weighted basis, Canadian Small-/Mid-Cap Equity funds beat the S&P/TSX Completion by 10.7%. Larger funds tended to do a little worse than smaller funds, as the asset-weighted difference between these active funds and the benchmark narrowed down to 9.0%. On the other hand, Canadian Dividend & Income Equity funds trailed the S&P/TSX Canadian Dividend Aristocrats® Index by 12.9%, with little difference by size (see Reports 3 and 4).

Larger Canadian Equity funds (benchmarked against the S&P/TSX Composite) did better than their smaller counterparts. On an equal-weighted basis, these funds lagged by 1.7%, but on an asset-weighted basis, they actually surpassed the benchmark by 3.8%. Unfortunately, looking back over the past 10 years, these funds trailed the index by roughly 1% per year, regardless of weighting (see Reports 3 and 4).

Funds looking outside of Canada posted solid absolute returns, though they lagged their domestic-oriented peers and broadly failed to add value through active management. U.S. Equity, International Equity, and Global Equity funds posted similar annual returns on an asset-weighted basis of 24.4%, 22.3%, and 22.8%, respectively. However, the majority of these active managers (67%, 58% and 69%, respectively) still trailed their corresponding benchmarks over the past year (see Reports 1 and 4).

The SPIVA Scorecards' accounting for survivorship bias continues to provide a valuable caution for asset allocators. While more than 90% of funds stayed alive over the past year, 54% of all funds in the eligible universe 10 years ago have since been liquidated or merged. Global Equity funds were the most likely to survive after 10 years, with 65% still in business. Canadian Focused Equity funds were the least likely to survive, as just 38% managed to do so (see Report 2).

The mid-/small-cap fund category was the best performing among equity funds covered in this scorecard, with the S&P BSE 400 MidSmallCap Index returning 90.56% over the one-year period ending in June 2021. Investors in this category may have witnessed a wide spread in fund returns (the difference in the first and third quartile funds was 27.87%), posing investors with fund selection risks and challenges.