With allocations totaling $2.32 billion, Johannesburg-based AngloGold Ashanti Ltd. (AngloGold) had the world's largest gold exploration budget, after Newmont Corp., over the last 10 years but its proven and probable reserves decreased 61% during the same period. Despite a dedicated commitment to both grassroots and brownfields exploration, the company lost its position as the world's third-largest gold producer, a position it had held since 2006, to Russian gold miner Polyus Gold in 2021. 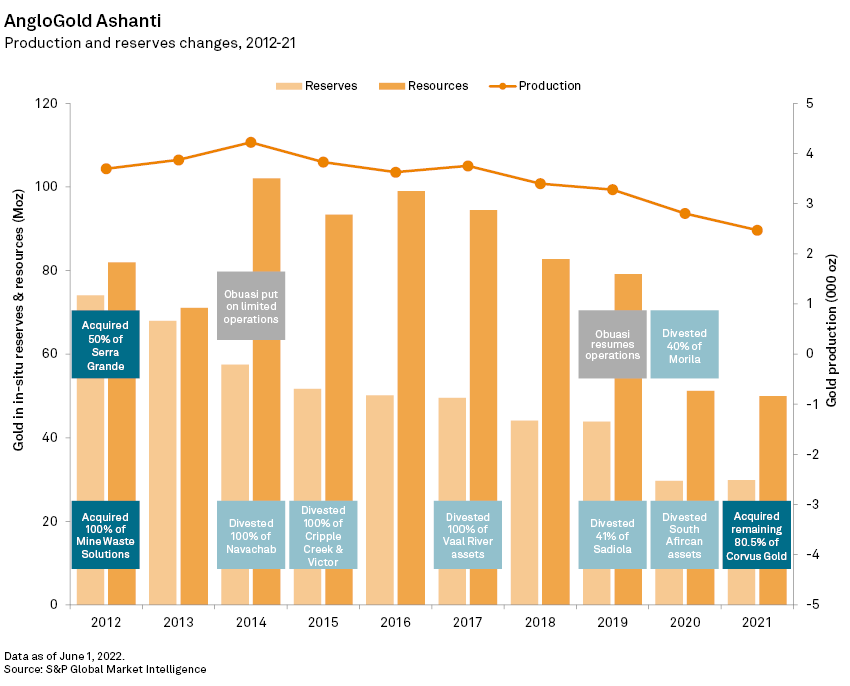 Our analysis of AngloGold's strategies is based on a detailed compilation of its activities over the 2012-21 period, part of the Strategies for Gold Reserves Replacement study, which includes analysis of the world's top five gold producers in 2021. These compilations show the relationships between each company's production, reserves, costs, exploration budgets, acquisitions, divestitures and gold discoveries during the period. 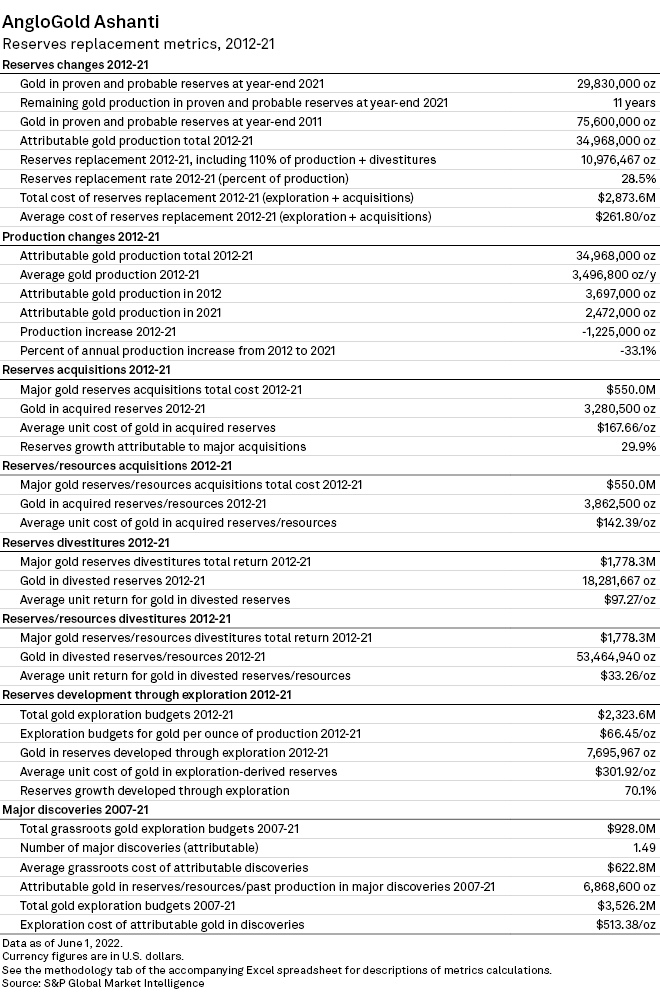 From 2012 to 2021, AngloGold added a total of 11 Moz to reserves, replacing only 28.5% of the gold produced over the period, at an average cost of $261.80 per ounce. At the end of 2021, it held 29.8 million ounces of gold in proven and probable reserves, with a further 49.9 Moz of measured and indicated resources contained within more than 123 Moz of total resources.

Production has fluctuated over the past 10 years, from a high of 4.2 Moz in 2014 to a low of 2.5 Moz in 2021, but output is expected to rise again in 2022, following the resumption of underground mining from the Obuasi operation in Ghana in October 2021.

Acquisitions did not figure prominently in AngloGold’s reserves-replacement strategy during the 2012-21 period, as the company spent $550 million to acquire just 3.3 Moz of reserves. By comparison, Newmont spent $10.83 billion to acquire 65 Moz of gold. Only 30% of AngloGold's reserves additions came from acquisitions. 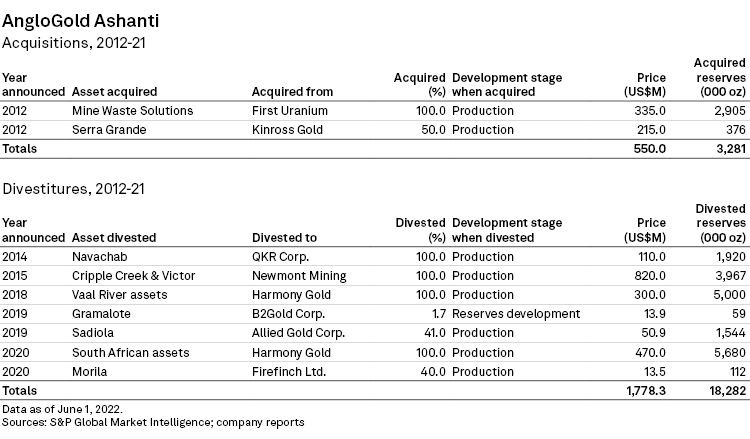 Acquired assets included the Mine Waste Solutions surface operation in South Africa and the remaining 50% interest in the Serra Grande mine in Brazil from partner Kinross Gold Corp.

Divestitures over the period included the sale of the Navachab mine in Namibia to QKR Corp. Ltd. for $110 million in 2014, and the divestiture of the Cripple Creek and Victor operation in Colorado to Newmont for $820 million in 2015.

More recently, AngloGold has moved to divest additional noncore assets in Africa. In 2017-18, the company completed the sale of its Vaal River assets in South Africa, including the Moab Khotsong and Great Noligwa mines. In December 2019, it inked a deal to sell its 41% interest in the Sadiola Hill mine, also in Mali, to Allied Resources Ltd. for an attributable cash consideration of $52.5 million.

In February 2020, AngloGold agreed to sell its remaining South African assets, including the Mponeng, TauTona and Savuka mines and the Mine Waste Solutions surface operation, to Harmony Gold Mining Co. Ltd. for $470 million.

In January, AngloGold completed the acquisition of Nevada-focused Corvus Gold Inc., with the aim of establishing a low-cost, long-life production base in a premier mining district.

During the 2007-21 period, AngloGold is credited with shares in two major gold discoveries, hosting 6.9 Moz of gold in attributable reserves and resources. With gold exploration spending of $3.53 billion over the 15-year period, the exploration cost of the discovered gold was $513.38/oz. When discoveries back to 1990 are included, seven additional finds are added to the company's portfolio, providing more than 79 Moz of discovered gold.

Two of the discovered orebodies, Tropicana in Australia and Corrego do Sitio in Brazil, were subsequently brought into production, and the Gramalote and Quebradona deposits in Colombia are undergoing feasibility studies and permitting.

For a detailed look at all the major gold finds over the past 10 years, please see Gold RRS 2022 — Surge in recent discoveries.

Over the next five years, AngloGold aims to increase output to 3.2 Moz-3.6 Moz per year while reducing all-in sustaining costs to $900-$1,150/oz. The company has significant financial strength with $2.8 billion of liquidity.

In addition to forays into Russia, the Philippines and Laos, AngloGold has been exploring in Colombia for over a decade, establishing an office there in 2005. It has had considerable success in finding gold in the country — more than 44 Moz discovered to date — but in 2018 it suspended its $2 billion La Colosa project after the local community voted to ban mining in the area due to environmental concerns.

At the Gramalote project in Colombia's Antioquia department, a final feasibility study is expected in August 2022. According to a January 2020 preliminary economic assessment, a $901 million open pit operation could produce 416,600 oz/y of gold during the first five years and 283,990 oz/y at an all-in sustaining cost of $648/oz over a 13.6-year mine life. Feasibility work completed in early 2021 suggests project economics can be improved by optimizing the original project design, along with additional drilling of the inferred portions of the resource area, both within and adjacent to the proposed pit.

At the wholly owned Quebradona copper-gold project, also in Antioquia, a feasibility study revised in 2021 outlined a $1.35 billion underground mine producing a total of 1.3 Mt of copper, 1.4 Moz of gold and 21.6 Moz of silver over 23 years. In November 2021, however, the Colombian Environmental Agency officially "archived" the project's environmental license application, a decision that allows it to neither approve or deny a permit. AngloGold will prepare and submit a new application, which will likely add 24 months to the timeline.

Following the January 2022 acquisition of Corvus Gold, AngloGold is looking to establish a low-cost, long-life production base in southern Nevada's Beatty mining district. The long-range plan envisions developing Corvus' North Bullfrog deposit first, followed by AngloGold's own Silicon project, which recently declared an initial 3.4-Moz resource, and then potentially the nearby Merlin target. Mining of the Mother Lode deposit is also envisioned after additional study work. The district is expected to yield more than 300,000 oz/y for more than a decade at a Tier-One cost structure.