Our Materials Price Index (MPI) rose 1.4% last week, reversing the declines recorded during the previous week. Exactly half of the ten subcomponents in the MPI increased: evidence of the uncertainty permeating markets at present. That said, the general direction of commodity prices has been down over the past two months with the index now 12.3% lower than its all-time high established in early March. 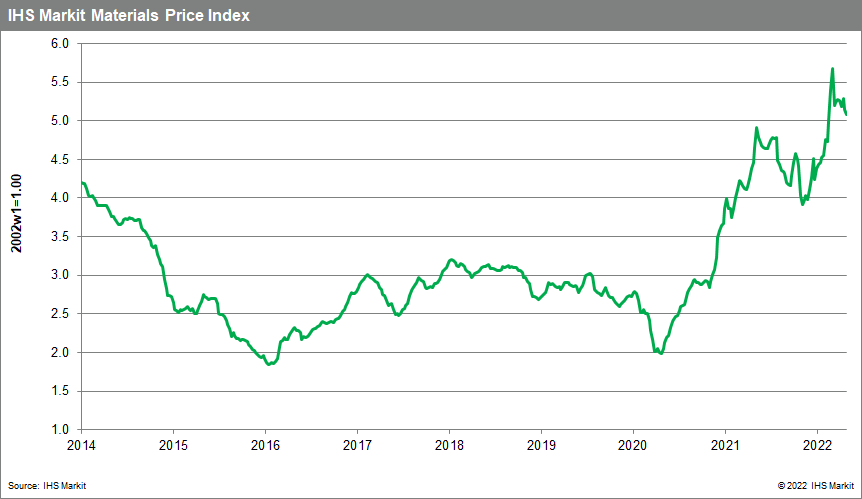 A flurry of activity in oil markets was the catalyst for commodity price rises last week. The EU announced the details of its Russian embargo on crude oil products causing a surge in prices at the start of the week. The ban included all seaborne crude oil products from Russia, around 75% of the total imports into the EU. This caused Brent Crude, the international benchmark, to reach $125/barrel, its highest in two months. However, OPEC+ then announced its plans to accelerate production increases in July and August from 400,000 barrels a day to 650,00 barrels a day. This supply boost brought prices back down to $115/barrel. Even so, oil prices still finished the week 2% higher and have now increased for three consecutive weeks. Elsewhere, supply concerns in metal markets continue to provide upward pressure on prices. The price of zinc rose to $3,977 per tonne from a low of $3,743 per tonne in the prior week of trading after weak first quarter production figures from the industry. Glencore, the world's largest zinc producer, announced its production in the first quarter was almost 15% lower than the same period in 2021. Zinc producers are wrestling with higher energy costs with much of European refining capacity being taken off-line.

Equity markets slid last week and have now fallen in eight of the last nine weeks as investors remain wary of high inflation and monetary tightening. Tight labor markets in the US remain a source of concern and the latest data showed nonfarm payroll employment rose 390,000 in May, a bit above the IHS Markit estimate and the consensus expectation. Even though the data release reported payroll gains slowing in the US, equities still declined on the expectation that the Federal Reserve will pursue aggressive monetary tightening. Inflation is unacceptably high, unemployment unsustainably low, and inflation expectations have crept above the Fed's long-run 2% objective. Markets do not have long to wait for fresh information on inflation or policy direction -- the US May CPI report will be released this Friday followed by the US Fed and European Central Bank meetings next week. IHS Markit believes the data will soon show a definitive peak in inflation, though its retreat over the next year may prove to be painfully slow. The looming threat, however, is in energy markets where growing physical tightness over the next six months may trigger record oil prices by year-end.