Cloud Maturity and Cloud Skills: Moving Up the Learning Curve

Traditional multichannel subs to show moderate growth during the year as cable and IPTV connections increase and direct-to-home continues its downward trend.

Residential fixed broadband subscribers to expand by 5.6% in 2021, a much faster pace than the multichannel industry's expected growth of 0.3% in the same period.

After the devastating effects of COVID-19 in the Latin America and Caribbean region, 2021 will likely see the start of an economic recovery that could continue telecommunications trends from previous years, with fixed broadband leading growth, mostly supported by the expansion of fiber optic networks.

Traditional multichannel subscriptions are expected to show moderate growth during the year as cable and IPTV connections increase and direct-to-home continues its downward trend.

The regional exit strategy for Telefónica SA will continue to attract the spotlight during 2021, as in January the company signed a deal to sell its infrastructure subsidiary Telxius Telecom SA towers to American Tower Corporation, which includes sites in Argentina, Brazil, Chile and Peru. The company, which agreed to sell its Costa Rican subsidiary to Liberty Latin America in July 2020, is expected to continue looking for interested parties for the rest of its Central and South American operations — save Brazil — during the year as well as search for partners in its fiber infrastructure ventures in Brazil, Chile and Peru.

Kagan estimates that the region's residential fixed broadband subscribers should expand by 5.6% in 2021 to 91.1 million, a much faster pace than the multichannel industry's expected growth of 0.3% to 69.0 million subscribers in the same period.

Slower economic growth added to the economic impact of the pandemic plus the migration of customers to increasingly available over-the-top platforms have factored into our analysis to revise down our expectations for the regional multichannel market. Kagan expects Latin America to reach 76.7 million multichannel subscribers by 2029, while fixed broadband could reach 123.1 million subscriptions by that same year's end.

Fast fiber-optic connections are pushing growth in broadband. Many operators and incumbents are migrating legacy DSL customers to newer fiber-to-the-home, or FTTH, connections to fill the need for speed and bandwidth, a trend accelerated during 2020 as government lockdowns forced many users to work remotely and stay at home. Kagan forecasts FTTH broadband to grow by 21.9% in 2021, reaching 30.9 million subscribers by year's end while DSL continues to lose customers. Our forecast points to a negative 5.9% yearly average growth rate for the platform between 2020 and 2029. 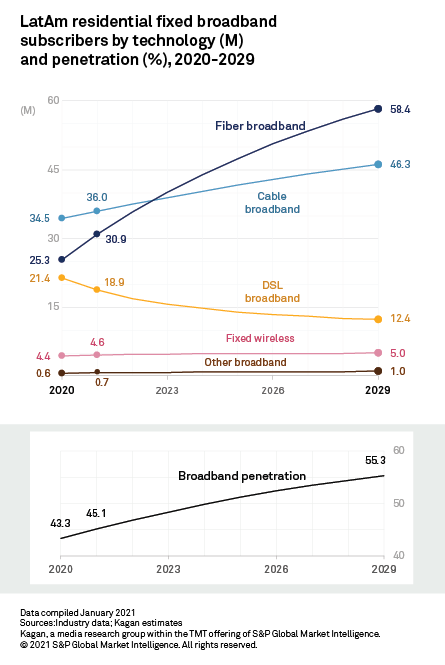 The devastating economic downturn in 2020 in the wake of COVID-19 was estimated at an average growth rate of negative 7.7% for the region — the worst in 120 years, based on estimates from the UN's Economic Commission for Latin America and the Caribbean, or ECLAC. However, Latin America is expected to resume economic growth in 2021 at a 3.7% rate, according to ECLAC, and 4.0% according to an October 2020 report by the World Bank.

The economic downturn in the region accelerated some trends regarding cord cutting and reduced spending in areas such as prepaid mobile, as people were forced to stay home, and also made several companies reduce capital expenditures during 2020 as they looked for more clarity regarding the impact of the pandemic. However, early reports indicated that many telecommunications companies showed only a limited impact from the pandemic.

S&P Global Ratings estimates that the region's top economies could return to pre-pandemic levels by 2022, with Mexico taking longer in 2023 and Argentina potentially not returning to previous levels until beyond 2023.

M&A: Telefónica HispAm spinoff, DIRECTV back on the auction block

After nearly completing its Central American exit in 2020, Telefónica is likely to continue to pursue the sale of all or parts of its HispAm unit, mostly regarding its operation in South America with the exception of Brazil, as well as its El Salvador unit, which was poised to be acquired by América Móvil SAB de CV but was blocked by local regulatory agencies. In a call with Goldman Sachs in September 2020, Telefónica CFO Laura Abasolo said options such as a spinoff or outright sales were being considered but had been made more difficult because of COVID-19. "We need to decrease the equity of Telefónica around Hispam," said Abasolo.

Market observers have said the Spanish company might want to keep just Brazil and Mexico as part of the regional rollback while selling its Chile, Ecuador, Uruguay and Colombia units.

AT&T Inc., the leading DTH operator across the region, might also be looking to unload its regional assets, hit by declining subscriber figures in main countries such as Brazil. Following a failed attempt in 2018 to spin off Vrio Corp., which encompasses its DIRECTV Latin America assets, the company sold its Venezuelan assets to Scale Capital in 2020 and may need to sell its DIRECTV DTH unit in the U.S. to fund its 5G deployment.

The Brazilian market is also primed to see more consolidation, following the joint acquisition by América Móvil's Claro Brasil, Telecom Italia SpA's TIM Participações SA and Telefónica's Telefônica Brasil of Oi SA's mobile operations for 16.5 billion reais in a December 2020 auction. Oi plans to continue its asset divestiture strategy by putting parts of its fiber infrastructure business, as well as its pay TV operations, up for sale during the year. TIM Participações, Telefônica Brasil, Telefónica Chile and Telefónica Peru have also announced plans to put a majority stake of their fiber infrastructure units on the block during the year.

Latin America is looking at the low and mid-bands for its 5G deployment, and several countries are planning to launch spectrum auctions toward that end in 2021. At the moment, only Uruguay has 5G services in the region, while Chile's government unveiled in January a 5G test zone of about 5.5 kilometers in the capital Santiago.

Auctions for spectrum were put on hold in many countries during 2020 due to conservative capital strategies by companies because of the pandemic, but several countries could open spectrum bids during 2021 after tests were conducted in Chile, Brazil and Argentina during the previous year.

To see our report on the Latin American mobile and 5G spectrum prospects, click here.

Several countries in the region are expected to hold general or local elections during 2021, which could turn into polls for Latin Americans to gauge their leaders' response to the COVID-19 pandemic and potentially introduce uncertainty into the economic outlook. Some countries, such as Chile, could even introduce changes to their whole political structure, as the South American country is expected to elect a convention charged with rewriting its constitution in April after months of political protests in 2019 and 2020.

The impact of COVID-19

In November 2020, the UN's ECLAC presented a Digital Agenda for the region that included commentary regarding the impact of the pandemic across the region. It said COVID-19 has demonstrated that digital technologies were essential to accomplish social distance and reduce the devastating impact of the measures taken to prevent contagion.

"Adoption of these technologies has also accelerated considerably during this period, providing solutions for trade, labor, education and health. However, the coverage and use of digital technologies are still determined by structural and socioeconomic factors. In the medium and long terms, social welfare will clearly not be possible without access to and use of digital technologies in all areas of economic and social life," it added. The document presented a 39-goal plan, including areas such as strengthening remote education and creating information and communications technology-focused strategies for economic recovery, as well as addressing the affordability of both devices and connectivity itself.

In terms of regulations, Peru is debating legal changes that could bring back the need for authorizations to deploy mobile antennas in the country, which could potentially affect the deployment of mobile internet. In Brazil, Chinese company Huawei Investment & Holding Co. Ltd. has stepped up efforts to fight against potential restrictions to its equipment in the deployment of state-of-the-art mobile 5G networks and has reportedly hired former Brazilian President Michel Temer as an advisor in the legal fight.