Worldwide manufacturing and services PMI data will be eagerly anticipated next week for the first indications of early Q4 performance around the globe. Intertwined with the PMI data releases will be central bank meetings across the US, UK, Norway, Australia and Malaysia with further rate hikes expected, especially from the US Federal Reserve. A series of tier-1 economic data including October US payrolls and eurozone Q3 GDP and October flash CPI figures will also be anticipated.

The release of October flash PMIs reinforced concerns of economic slowdown this week with the US and Europe facing heightened risks of recession according to the latest data (see special report). Next week's update on worldwide manufacturing and services data will therefore shed light on whether the rest of the regions face similar pressures at the start of the final quarter of 2022.

Central bankers meanwhile are caught in the crosswinds between elevated price pressures and slowing global economic growth. Despite so, most are set to remain in their resolute to tame inflation with central banks from US to Australia due to raise rates in the meetings next week. The Fed, in particular, is expected to institutionalise another 75-basis points hike, although their path thereafter appears a little less certain. As such, the Fed's rhetoric will be closely watched for hints on the magnitude of future rate hikes. October's payrolls data will also be an important piece of information and may offer indications on the level of concern necessitated from central bankers as the US labour market look set to soften against weaker demand as signalled by the latest PMI data.

Meanwhile the Bank of England is just as certain to act to tame the elevated, albeit easing, price pressures domestically. Despite the lingering uncertainties on the politics front, whereby stability in the months ahead is yet to be guaranteed even with a change of Prime Minister, the BoE looks set to raise rates further into a recessionary environment.

Some comfort has been drawn from the resilience of labour market data amid growing signs of recession, with sustained hiring in key developed economies allaying fears of a deep downturn. However, that resilience is now showing some cracks.

One of the features of the pandemic was a substantial build-up of order book backlogs at companies, where shortages of raw materials and shipping delays prevented firms from meeting customer demand. The auto sector is perhaps the most well-documented example of such an inability to meet demand, due to the lack of semiconductors. These backlogs have been a welcome source of continued growth in 2022, facilitated by improving supply lines.

However, the October flash PMI data reveal that these backlogs have been falling in recent months. The rate of decline has in fact accelerated markedly at the start of the fourth quarter to the steepest for a decade (if the early pandemic shock is excluded). The problem is that there is a dearth of new orders being placed from customers to replace these back-orders. Companies are thus growing concerned that costly excess capacity is now developing. Hence, according to the October flash PMI data, the rate of job creation slowed across the four largest developed economies to the lowest since February 2021, representing a major downshifting of hiring since the survey peaks seen during the second quarter of the year. US jobs are already being cut. Final PMI data due out in the coming week will help further reveal the extent of the global hiring slowdown and give more clues as to the potential depths of recessions. 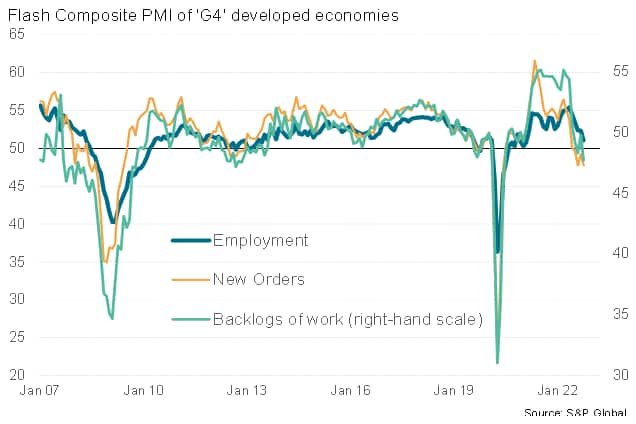 Worldwide manufacturing and services PMIs will be released in the coming week following the October flash PMI updates, which revealed heightened recession risks in the US and Europe (see special report). Meanwhile Japan was the only major developed world economy to reflect expansion, buoyed by service sector improvements. Overall confidence across US to Japan nevertheless slumped while the job market softened. Manufacturing, services and composite PMI data will therefore be tracked across the world for indications on the health of the global economy at the start of the fourth quarter.

A busy week ahead for the US economic calendar is packed with both the November Fed FOMC meeting and labour market data. The latest consensus pointed to another 75 basis points (bps) rates hike by the US Federal Reserve even as the latest flash PMI data showed the US private sector falling sharply into contraction territory. Indications on the path post the 2 November meeting will be closely observed and we expect the pace of rate hikes to slow, subjected to changes in the inflation outlook.

On the labour market developments, the consensus calls for a 200k addition to non-farm payrolls in October, easing from the 263k registered for September. Unemployment rate is expected to tick up slightly to 3.6% while average hourly earnings is expected to continue rising at a pace of 0.3% month-on-month (MoM).

Besides PMI data to allude to October economic conditions, the market will be looking to official eurozone Q3 GDP data and October flash inflation figures next week.

Central bank decisions in the UK and Norway will also be unveiled with the market expecting a 75-bps hike by the Bank of England to 3.0%. While the elevated price pressures will drive the BoE to move, the central bank will be hiking into a contractionary environment.

Central bank decisions in Australia and Malaysia will be anticipated in the coming week. For the Aussie central bank, cash rate is expected to tick up further by 25-bps to 2.85%