October flash PMI data showed economic contractions gathering pace in the US, eurozone and UK, leaving Japan as the only major developed world economy to muster any expansion at the start of the fourth quarter. However, even in the latter business confidence in the outlook has deteriorated to present a full house of downbeat sentiment for the year ahead across the largest advanced economies. This thereby hints strongly at the economic growth trend weakening further in the coming months.

Business investment and employment look set to also deteriorate amid the drop in confidence and signs of excess capacity developing.

One upside of the slowdown has been a further alleviation of supply constraints and reduced upward pressure on commodities. Although energy prices and wage costs continued to drive elevated rates of inflation for firms across the developed world, even these pressures look likely to moderate in the coming months. Markets will therefore be eager to see whether central bank policymakers react to the latest signals of rising recession risks and peaking - but potentially sticky - inflation.

The October flash PMI data showed the global economy at increased risk of recession amid headwinds from the cost-of-living crisis, tightening financial conditions and heightened risk aversion in response to growing economic gloom. 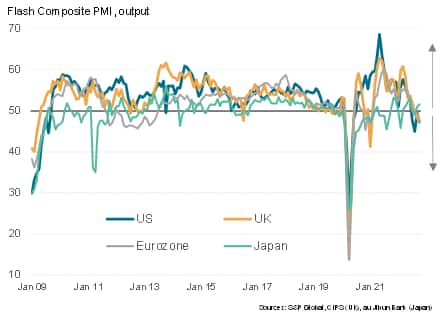 According to the early PMI survey data compiled by S&P Global, increasing rates of output decline were seen across the US, eurozone and UK, leaving Japan as the only one of the four largest developed economies - the 'G4' - to report growth. The past two months are notable in that this is the first period during which Japan las led the G4 in terms of the composite PMI output index since comparable data were available in 2009.

The combined picture across the G4 is therefore one of output falling for a third successive month, with the rate of contraction the second steepest seen since the global financial crisis in 2009, barring initial pandemic lockdown months. 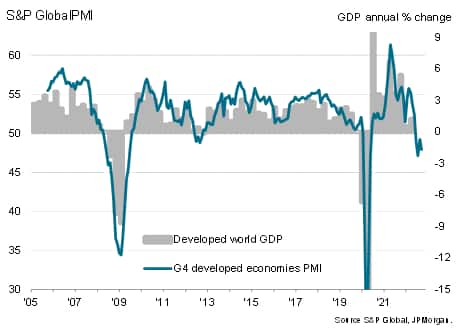 The US economic downturn gathered significant momentum in October, according to the flash S&P Global PMI data, led by a downward lurch in services activity and a near-stalled manufacturing sector. The headline Flash US PMI Composite Output Index registered 47.3 in October, down from 49.5 in September. With the exception of the initial pandemic period, the rate of decrease was the second-fastest on record (behind August) and indicative of GDP falling at an annualised rate approaching 2%.

US GDP and the PMI 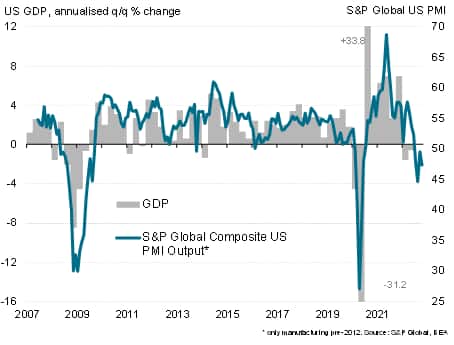 The eurozone economy slipped into a steeper downturn at the start of the fourth quarter, the rate of decline hitting the fastest since April 2013 barring pandemic lockdowns as the flash PMI fell from 48.1 to 47.1. Manufacturing, and energy intensive sectors in particular, reported the steepest output loss, but services activity also continued to fall at an accelerating rate amid the ongoing cost-of-living-crisis and broad-based economic uncertainty.

October's headline flash PMI is consistent with GDP falling at a modest rate of around 0.3%, but demand is falling sharply and companies are increasingly growing worried over high inventories and weaker-than-expected sales, especially as winter approaches. The risks are therefore tilted towards the downturn accelerating towards the year-end.

Eurozone GDP and the PMI 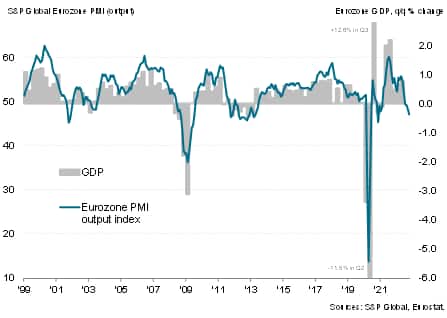 In the UK, business activity fell for a third month running in October as heightened political uncertainty and financial market volatility added to the country's economic headwinds of the cost-of-living crisis and Brexit. The rate of decline accelerated to the fastest since January 2021 with the flash PMI down from 49.1 in September to 47.2. More importantly, if pandemic lockdown months are excluded, the decline was the steepest since the height of the global financial crisis in March 2009. Comparisons with GDP indicate that the latest PMI reading is broadly consistent with the UK economy contracting at a quarterly rate of 0.4%.

Japan bucked the trend of falling output observed in the US and Europe, the au Jibun Bank PMI (compiled by S&P Global) rising from 51.0 in September to 51.7 to register the strongest expansion since June. Faster service sector growth, linked to the reopening of the economy from COVID-19 restrictions, helped offset a further decline in manufacturing output. 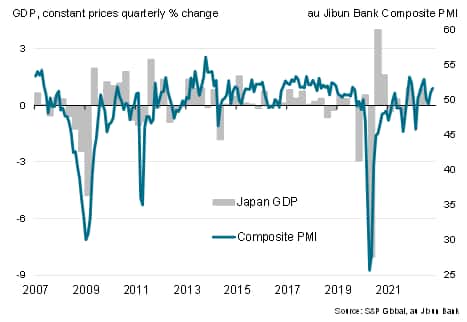 Near-term growth prospects look to be skewed to the downside, with new orders inflows falling at an increased rate across the G4 on average in October, and firms' expectations about the year ahead slumping markedly. Future sentiment across the G4 is now the second lowest since comparable data were first available in 2012, if the early pandemic months are excluded. 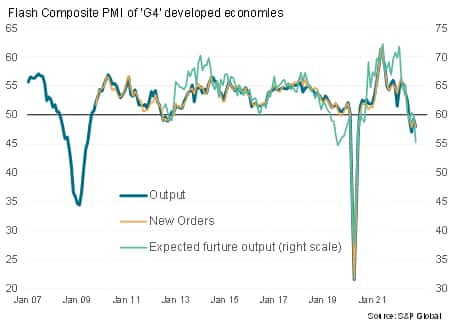 Compared to long-run averages, business sentiment has collapsed especially sharply in the UK, with the latest slump reflecting the country's intensifying political crisis. However, sentiment also fell sharply in the US, fueled by the cost-of-living crisis and growing concerns about higher interest rates. Furthermore, business confidence remained worryingly low in the eurozone where the energy crisis compounded concerns over the rising costs of living. Even Japan saw sentiment about the year ahead weaken slightly amid concerns over a waning COVID-19 rebound. 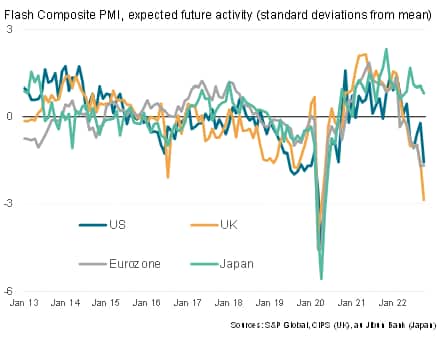 At the same time that business confidence has slumped, the flash PMIs signalled a fourth successive monthly drop in firms' backlogs of work across the G4 economies, with the rate of decline accelerating to one of the steepest seen over the past decade. Backlogs of work are a key indicator of capacity utilisation, and as such - alongside the PMI's future output expectations index - tend to provide a useful guide to upcoming investment and employment trends. In that respect the rate of job creation slowed across the G4 economies to the lowest since February 2021, representing a major downshifting of hiring since the survey peaks seen during the second quarter of the year. 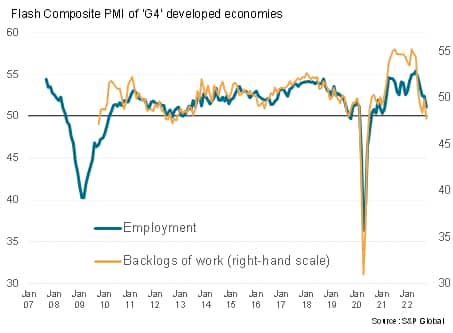 The hiring trend has deteriorated most markedly in the US, accompanied by an above-average drop in backlogs of work. The October flash PMI in fact registered a marginal drop in US employment for the first time since June 2020 (and, prior to the pandemic, since January 2010).

Jobs growth also softened sharply in the UK and remained weak in the eurozone, while only modest jobs growth was recorded in Japan. 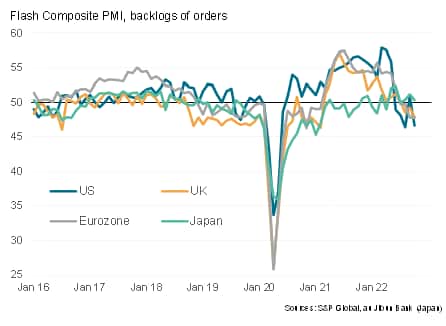 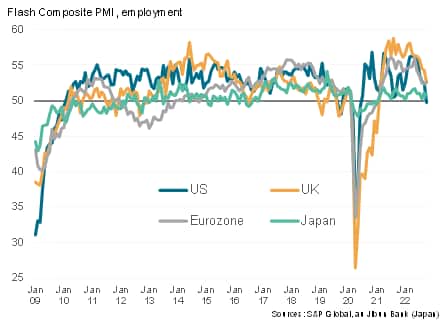 Across the developed world, input cost inflation has cooled as supply chain delays have eased, linked in turn to falling demand for inputs from manufacturers. This deterioration of demand is reflected in the steepest drop in manufacturing new order inflows seen across the G4 since 2009, barring the initial pandemic months. This has taken pressure off supply chains, resulting in the fewest supplier delivery delays seen across the G4 for just over two years. The pricing environment for many industrial inputs is therefore shifting from a sellers' to a buyers' market. Hence average input costs rose across the G4 manufacturing sector at the slowest rate for 20 months in October. 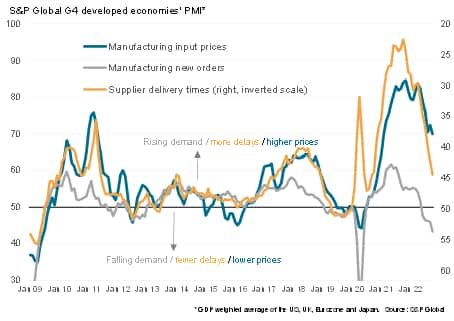 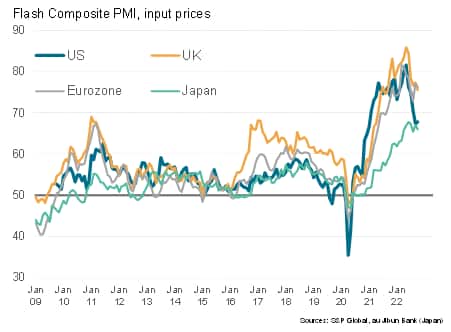 Looking ahead, the combination of falling demand, a shift toward inventory reduction and improving supply lines should all help further alleviate industrial price pressures. In the meantime, the cooling of the labour market should help soften upward wage pressures. Energy prices remain a major unknown and a concern, but even here recent data are pointing to lower gas prices in Europe and oil prices have fallen sharply since mid-year, which should help bring inflation down, including in the service sector.

However, a further uncertainty will be the degree to which central banks in Europe and the US continue to tighten monetary policy. Further steep interest rate hikes have been trailed by the FOMC, Bank of England and the ECB, and these rate hikes will inevitably cool demand further and reduce inflationary pressures. The big question is how long policymakers will feel comfortable with such aggressive policy tightening amid growing signs of economic contraction and peaking inflation. 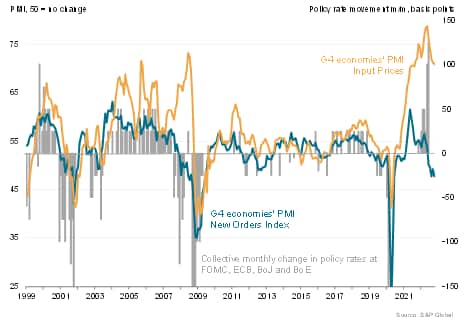