November flash PMI figures for major developed economies will be eagerly awaited in the coming week while interest rates updates in mainland China and South Korea will also be due. The US Federal Reserve meanwhile releases minutes from the November FOMC meeting ahead of the Thanksgiving holidays. Amidst a busy data calendar, a string of Q3 GDP data arrives out of Germany, Singapore and Thailand.

The market has well demonstrated its sensitivity to data of late and this was especially so in the US. Equity prices rose previously following lower-than-expected October US CPI readings while the latest stronger-than-expected retail sales data kept investors on edge.

At the root of this phenomenon had been the uncertainty shrouding the US Federal Reserve's path forward after various Fed members signalled their openness to slower rate hikes in upcoming meetings. The pace at which interest rates may be further lifted is expected to be primarily data-driven. Therefore, against this backdrop, not only will the November Fed minutes be parsed in the coming week, data including the flash November US PMI figures will be closely watched for clues on inflation, employment and output trends in the coming week. Any indications of easing inflationary pressures and, regrettably, slowing economic or jobs market conditions may be taken as signs of slower rate hikes that could provide support for risk assets.

Across the Atlantic, a series of economic releases will also be due from Europe alongside the flash PMI figures that is expected to shed light on the degree to which recession risks further grip the region. As far as the S&P Global Europe Business Outlook alluded to, business confidence sank to a survey low in October while cost inflation expectations soared to a survey peak amid the energy crisis, which does not bode well for the near-term outlook.

Finally, in APAC, the Bank of Korea meeting will be one to watch with further tightening expected to tackle the ongoing inflation pressures. Thailand and Singapore also release Q3 GDP data.

October's S&P Global PMI data revealed major developed economies to be at greater risks of recession, although Japan had been the exception, buoyed by service sector outperformance. Moving closer to the year end, November's flash PMI figures will further outline whether conditions in the US and Europe have deteriorated as we watch these releases next week. 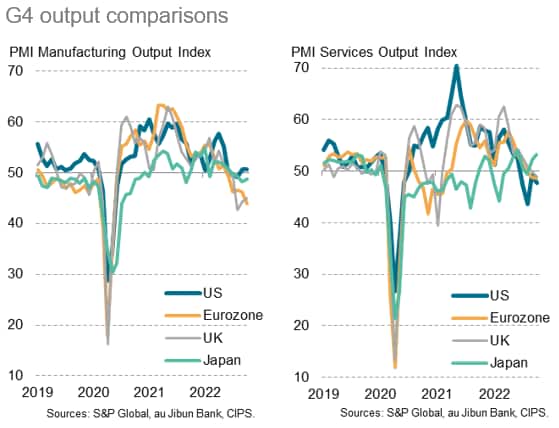 More importantly, it will be the inflation trend in focus with any further signs of inflation easing to be taken positively by the market. 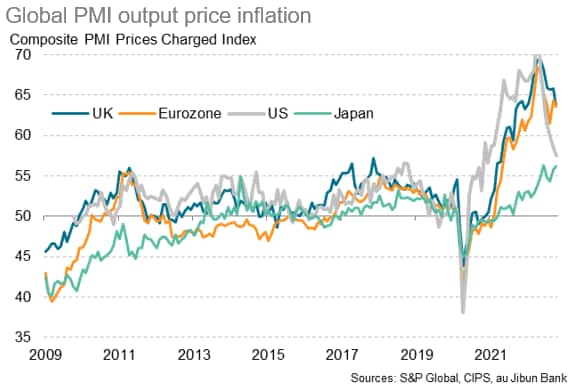 Flash PMI figures for major developed economies including the US, eurozone, UK, Japan and Australia will be released in the coming week for a first look at economic conditions in the penultimate month of the year. Prior data in October outlined a further slowdown of the global economy while inflation rates remain elevated by historical standards to warrant continued central bank attention. As such, November's data will be tracked for further risks of recession and implications for monetary policy and businesses. Read more in our special report below.

Meeting minutes for the November US Federal Open Market Committee (FOMC) meeting will be released in the coming week where the Fed hiked 75 basis points (bps) but hinted at a step down in upcoming meetings. Recent developments including the sliding of US CPI to +0.4% month-on-month (m/m) backs the likelihood of a 50bps hike in December, and the Fed minutes will be studied for confirmation of the Fed's resolve to lift rates at a more moderate pace.

In APAC, China's November loan prime rates will be published on Monday while the Bank of Korea will update their base rate on Thursday with a smaller hike expected following the 50 basis points rise on 12 October. Inflationary pressures remain the key issue for the South Korean economy while a weaker domestic currency, especially against the US dollar, has aggravated the issue.

Meanwhile Q3 GDP will be due from Thailand and Singapore. Singapore's release will be the final figures after the 4.4% year-on-year (y/y) advance reading.