A further steep fall in business activity in November adds to growing signs that the UK is in recession, with GDP likely to fall for a second consecutive quarter in the closing months of 2022. Forward-looking indicators, notably an increasingly steep drop in demand for goods and services, suggest the downturn will deepen as we head into the new year.

While the recent change of government has resulted in improved business confidence, the mood remains among the gloomiest seen over the past quarter century amid the numerous headwinds driving an ongoing collapse in demand, which include the cost of living crisis, the Ukraine war, steepening export losses (often linked to Brexit), higher borrowing costs, fiscal tightening and heightened political uncertainty. 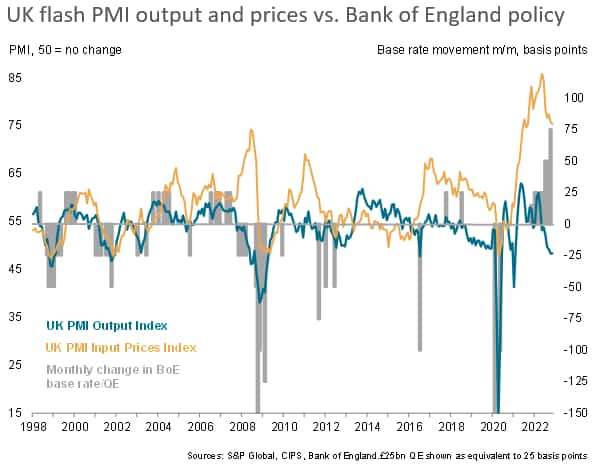 Business activity fell for a fourth successive month in November, according to the flash PMI survey data compiled by S&P Global and sponsored by CIPS. With the preliminary composite PMI registering 48.3, the rate of decline looks to have eased only very marginally compared to October, which had seen the steepest fall in output since January 2021 with a PMI reading of 48.2. As a result, if pandemic lockdown months are excluded, the PMI for the fourth quarter so far is signalling the steepest economic contraction since the height of the global financial crisis in the first quarter of 2009.

Comparisons with GDP indicate that the latest PMI reading is broadly consistent with the economy contracting at a quarterly rate of 0.4%. However, current weak signals from the household and retail sectors, largely excluded from the business-oriented PMI, suggest the fourth quarter GDP decline could be even steeper than this.

After a 0.2% GDP contraction in the third quarter, the continued decline in the closing quarter of the year would therefore indicate that the UK is in a technical recession, which forward-looking indicators suggest will persist into the new year. 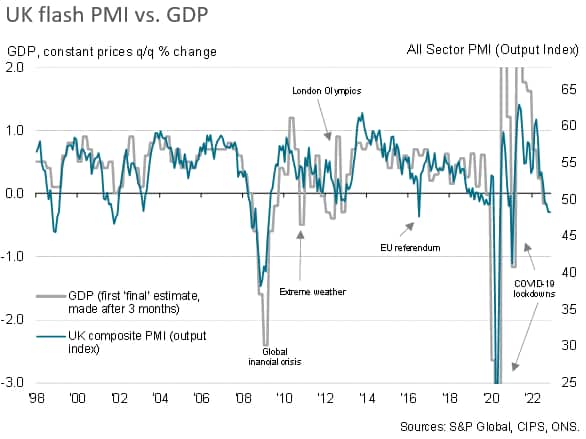 There was some positive news on firms' expectations of output in the year ahead, with future sentiment staging a partial recovery from the distressed level seen in October. Brighter prospects were often linked to the change in government and resulting improved financial market conditions compared to the adverse reaction suffered after the Kwarteng-Truss mini budget. The overall degree of confidence nonetheless remained lower than seen in the months prior to October, and considerably down on that seen at the start of the year, to reflect a mood among businesses that has rarely been more gloomy in the past 25 years of survey history.

The gloom was often linked to a continued collapse in demand. New order inflows fell across manufacturing and services at an increased rate in November, dropping at the sharpest rate since March 2009 if COVID-19 lockdown months are excluded. Such a bleak demand picture, and persistent low level of business confidence, suggests that near-term growth risks remain firmly skewed to the downside. 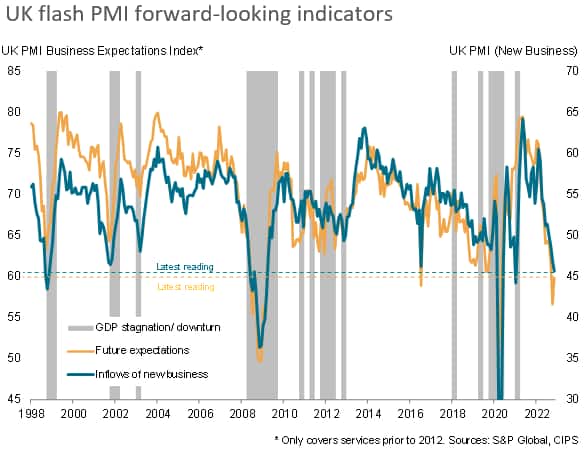 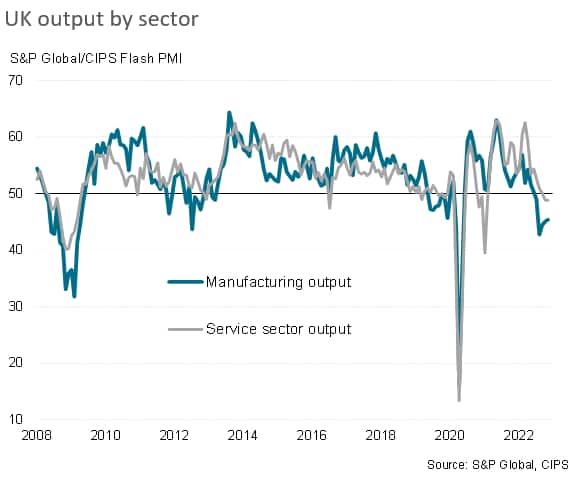 November saw output fall again across both the manufacturing and service sectors, the former recording the steeper rate of decline.

Looking in more detail by sector, manufacturing output fell for a fifth straight month, with production dropping sharply in response to a further steep deterioration in order books. Although the rate of decline of production and the loss of new orders eased slightly during the month, the fourth quarter has so far seen the biggest downturns in factory output and demand for goods since 2008, barring the pandemic shutdowns of early-2020. Both domestic and overseas demand is falling, with export orders dropping in November at the sharpest rate since December 2008, excluding the initial pandemic months, despite the benefits of the weakened currency.

Weaker than expected sales meanwhile led to a further marked increase in factory inventories, in turn driving one of the steepest downturns in input buying by manufacturers seen since the global financial crisis as firms prepared for further weak production in coming months. The forward-looking orders-inventory ratio consequently remained at an especially low level by historical standards. 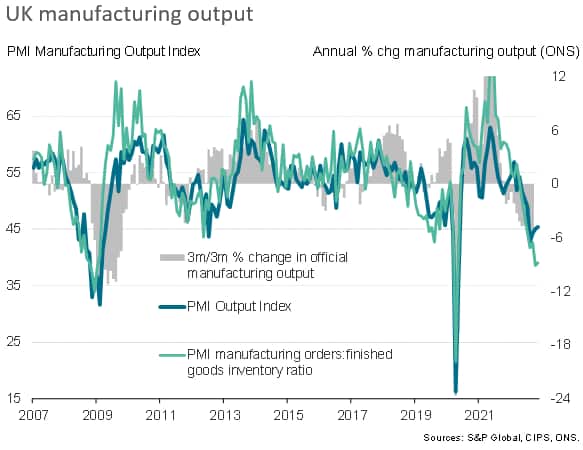 Output meanwhile fell for a second consecutive month in the service sector, the rate of decline unchanged on that seen in October and hence remaining the steepest recorded for two years. Notably, barring lockdown months and the initial EU referendum shock in 2016, the latest drop in service sector activity is the largest recorded by the PMI since early-2009.

An increased rate of loss of incoming new business, led by weakening demand in the domestic market, suggests the service sector downturn is likely to gain further momentum in December. 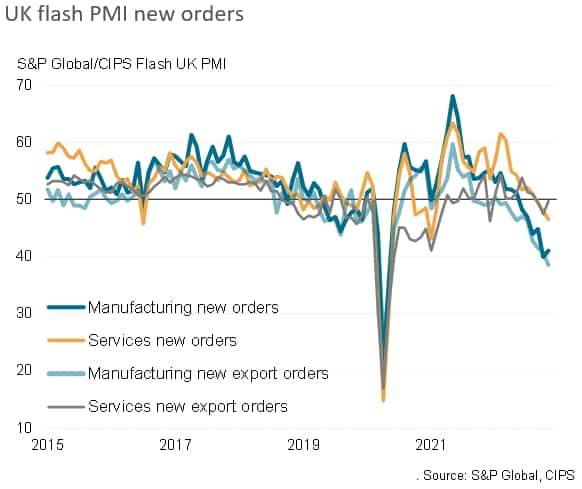 The sustained downturn in demand experienced in November, and subdued confidence in the outlook, led to a further pull-back in hiring. The overall rise in employment was consequently only modest and the smallest since the labour market recovery began in March 2021, the rate of job creation having fallen sharply since the start of the year. 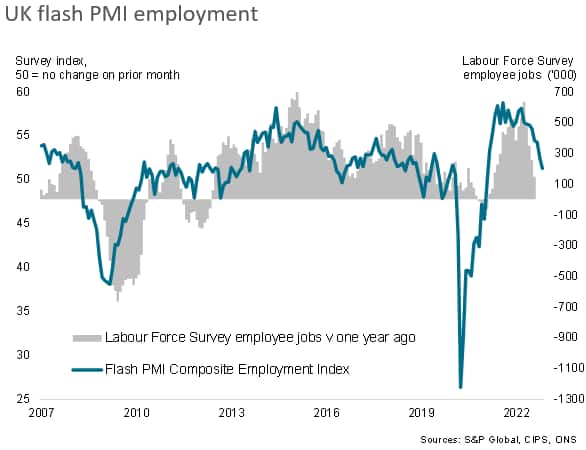 Manufacturing, which continued to report the sharper downturn in demand, notched up a second month of net job losses with the rate of job shedding accelerating markedly. While the service sector continued to hire, the latest payroll gain was the smallest since the sector's job market upturn commenced in March 2021. 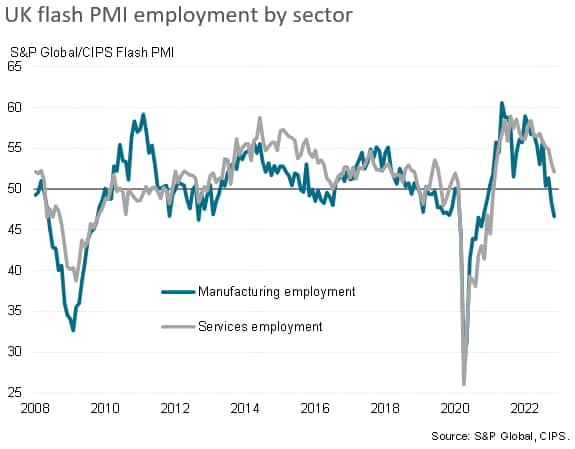 Although average input costs paid by manufacturers and service providers continued to rise at an elevated rate in November, albeit with the rate of increase edging down to a 14-month low. Average prices charged for goods and services also continued to rise steeply, though the rate of increase likewise waned, down to the lowest since August 2021 and down sharply on rates seen earlier in the year.

While the sustained elevated levels of the PMI price indices hint at inflation remaining well above the Bank of England's 2% target as we head into the new year, the further cooling of input cost and selling price growth bodes well for consumer price inflation to be peaking and to start to moderate - potentially significantly - in the coming months. 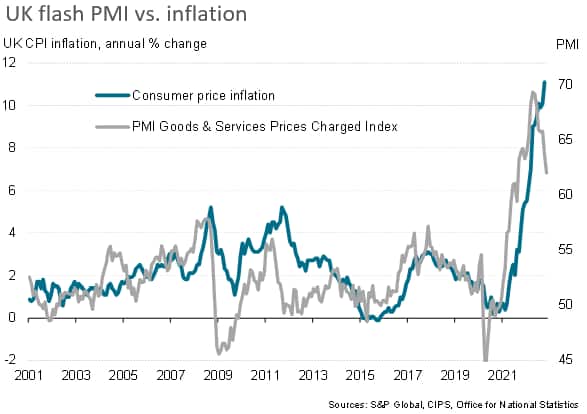 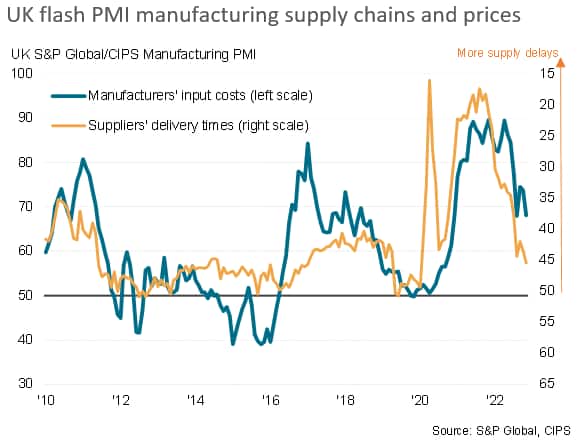 The November PMI data follow the change of UK government and most notably a reversal of the stimulative fiscal policies laid out in the Truss-Kwarteng mini budget, which have been replaced with a comparatively more fiscally restrictive budget of the new Chancellor Hunt in the new Sunak-led government. The November PMI data also follow a 75 basis point hike in interest rates by the Bank of England, which pushed the Base Rate to 3.0%, its highest since November 2008.

Our forecasters anticipate that the economy will remain in recession in the early months of 2023, but that the Bank of England will feel pressured to further hike interest rates to control inflation, resulting in a Bank Rate peak of 4.0%. However, this does imply that the extent of rate hikes will now start to moderate after the 75 basis point hike seen in early November.