November saw business activity fall across the eurozone for a fifth month running, according to flash PMI data. Although the rate of decline remained the second-strongest since 2013, excluding COVID-19 lockdown months, the intensity of the downturn moderated in response to a reduced rate of loss of new business, fewer supply constraints and a pick-up in business confidence about the year ahead. Business sentiment nevertheless remained gloomy by historical standards, and demand continued to fall at a steep rate, leading to a pull-back in employment growth during the month.

One upside of the weaker demand picture and alleviation of supply constraints was a cooling of price pressures, most notably in the manufacturing sector. Firms' costs rose at the slowest rate for 14 months, in turn allowing selling price inflation to moderate, albeit with rates of inflation remaining elevated.

Downturn broad-based across manufacturing and services

The seasonally adjusted S&P Global Eurozone PMI® Composite Output Index rose from 47.3 in October to 47.8 in November, according to the preliminary 'flash' reading based on approximately 85% of usual survey responses. The PMI has now registered below the neutral 50.0 level, indicating falling business activity levels, for five consecutive months, albeit with the latest data signalling a moderation in the rate of contraction. Nevertheless, the PMI data for the fourth quarter so far put the eurozone economy on course for its steepest quarterly contraction since late-2012, excluding pandemic lockdown months.

So far, the data for the fourth quarter are consistent with eurozone GDP contracting at a quarterly rate of just over 0.2%. 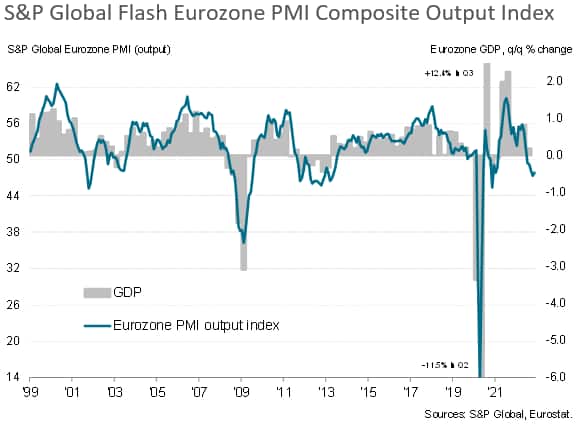 Manufacturing continued to lead the downturn, with factory output dropping for a sixth successive month. Although the rate of production decline eased, the latest fall was still the second-strongest recorded over the past decade if the height of the pandemic is excluded. Service sector output also fell, down for a fourth consecutive month, contracting at an unchanged rate com-pared to October. However, such a rate of decline had not been witnessed outside of pandemic lockdowns since June 2013. 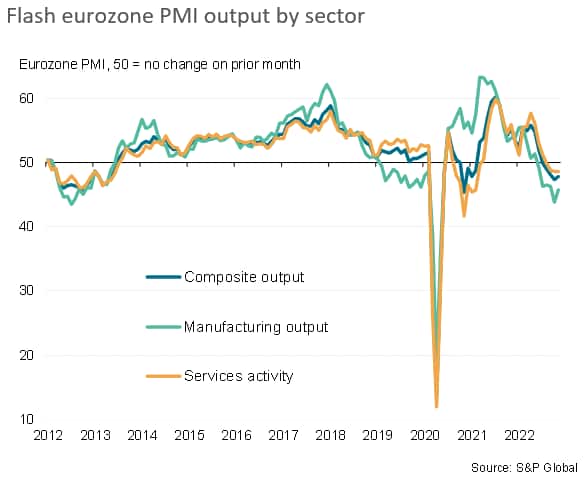 Within the euro area, Germany again reported the steepest downturn, the composite PMI at 46.4 to register a fifth monthly drop in output in as many months. Although the latest decline was the weakest since August, it was still the third largest since 2009 barring pandemic lockdowns. While Germany's manufacturing and service sectors both suffered similarly steep rates of contraction, the former saw a marked cooling in the rate of decline.

Output meanwhile fell in France, the composite PMI registering 48.8 to signal the first drop in business activity since February 2021. Service sector output contracted for the first time since March 2021 and manufacturing output fell for a sixth straight month, albeit the rate of decline moderating to the slowest since August.

Output fell in the rest of the eurozone for a third month in a row, albeit with November's decline being the smallest seen over this sequence. A marginal return to growth in the service sector contrasted with a steepening fall in factory production, which fell at a rate not seen since March 2013 barring pandemic lockdown months.

Comparing the PMI surveys to official data, the PMI for Germany is currently running at a level broadly indicative of GDP contracting at a quarterly rate in excess of 1%. In France, the PMI is indicative of a far more modest quarterly GDP decline in the region of 0.2%. 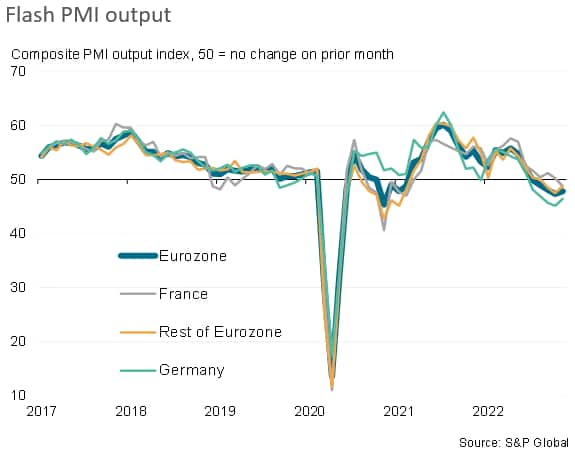 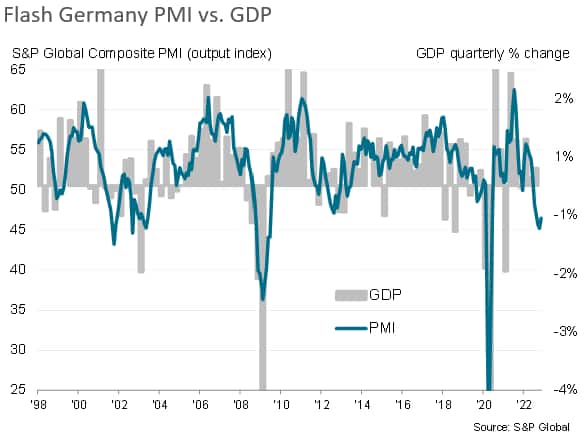 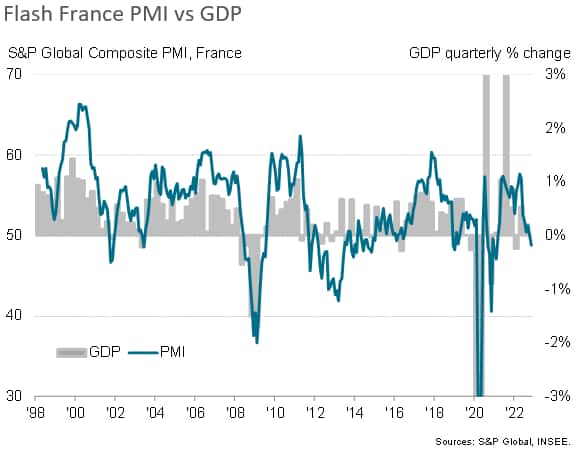 New orders for goods and services meanwhile fell for a fifth month running to signal a further marked drop in demand. Although the rate of loss eased from October, the drop in orders was the second-largest seen in the past two years. While new orders fell at a reduced rate in manufacturing, the rate of loss intensified slightly in services. 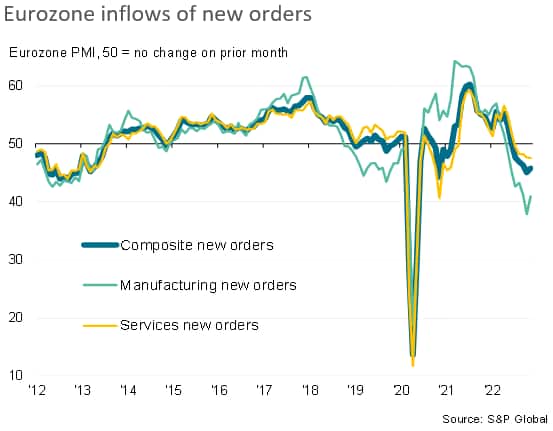 The deteriorating order book situation led to a growing reluctance to add to workforce numbers, resulting in the smallest monthly increase in employment since March 2021. The hiring slowdown was led by the service sector, though factory payroll growth also remained subdued. By country, jobs growth picked up in Germany but deteriorated in France. 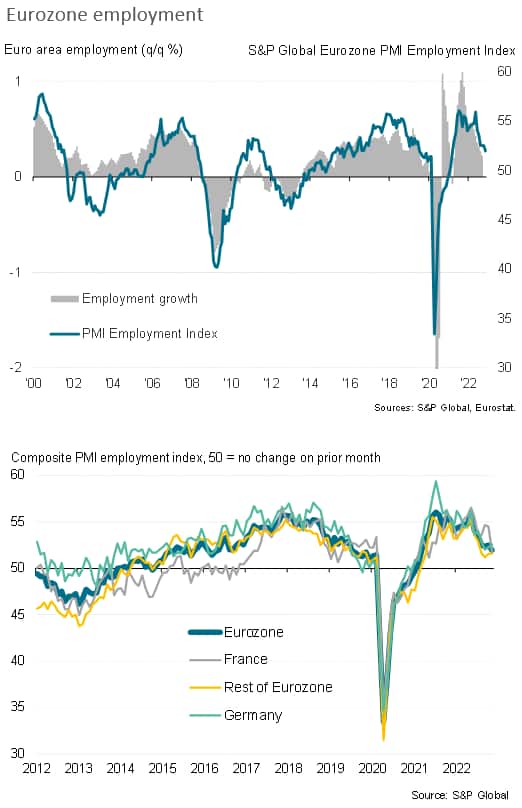 One positive consequence of weaker demand was a marked reduction in supply chain delays as input buying fell sharply again. Average supplier delivery times faced by eurozone factories lengthened to the least extent since August 2020. Factories in Germany even reported the first improvement in supplier performance since July 2020.

In addition to facilitating higher production in some cases, the improving supply situation - combined with weakened demand - took further pressure off prices. Average input prices paid by manufacturers rose at a markedly reduced rate as a result, showing the smallest monthly gain since December 2020. 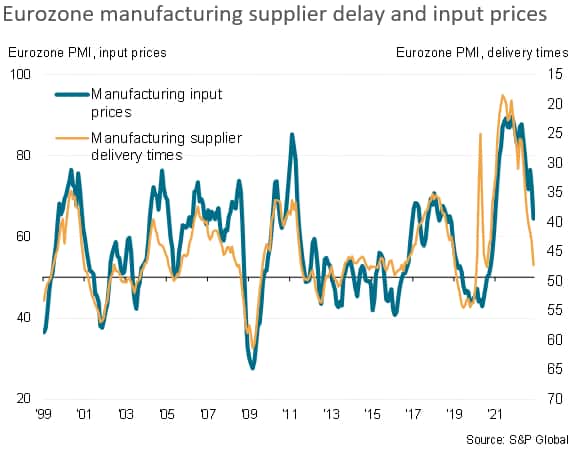 Service sector input cost inflation also moderated, down to the second-lowest in the past nine months. Measured across both sectors, input cost inflation cooled to the lowest since September 2021, albeit remaining elevated by historical standards thanks principally to high energy costs.

Average prices charged for goods and services also rose at a reduced rate, albeit likewise continuing to climb sharply, the rate of inflation cooling for a second month in a row to register the smallest increase since August. Rates of selling price inflation eased in both manufacturing and services, most notably to a 20-month low in the former. 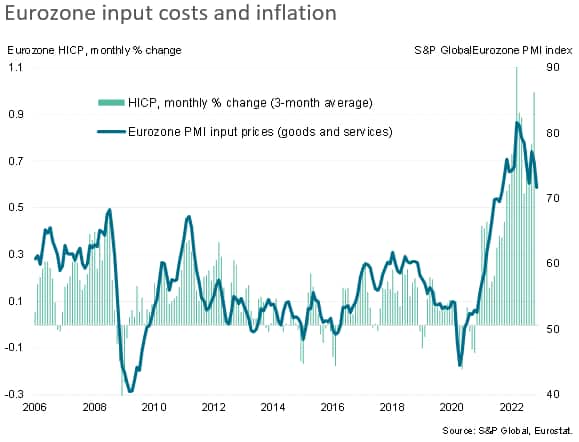 Finally, business expectations for the year ahead remained subdued, improving slightly for a second successive month but still running at the third-lowest since the early pandemic lockdowns. Confidence continued to be stymied by concerns over the growth outlook, the rising cost of living and the energy crisis, in turn linked to the Ukraine war, as well as rising interest rates.

Pessimism about the year ahead nevertheless eased considerably in manufacturing compared to the historically gloomy levels seen in September and October, linked to hopes of fewer energy-led constraints and improving component supply chains, while optimism improved slightly in the service sector to suggest that the overall degree of concern about the outlook has peaked for now. 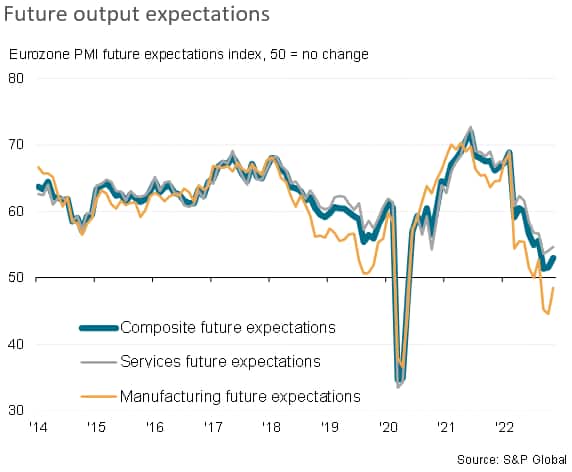 ECB to add to economy's headwinds

Although the further fall in business activity in November adds to the chances of the eurozone economy slipping into recession, the November PMI data also bring some tentative good news. In particular, the overall rate of decline has eased compared to October. Most encouragingly, supply constraints are showing signs of easing, with supplier performance even improving in the region's manufacturing heartland of Germany. Warm weather has also allayed some of the fears over energy shortages in the winter months.

Price pressures, the recent surge of which has prompted further policy tightening from the ECB, are also now showing signs of cooling, most noticeably in the manufacturing sector. Not only should this help contain the cost of living crisis to some extent, but the brighter inflation outlook should take some pressure off the need for further aggressive policy tightening.

However, it's clear that manufacturing remains in a worryingly severe downturn, and service sector activity is also still under intense pressure, both largely as a result of the cost of living crisis and recent tightening of financial conditions. A recession therefore looks likely, though the latest data provide hope that the scale of the downturn may not be as severe as previously feared.

Much will of course depend on the weather over the winter months: continued mild weather will reduce the risks of a deeper downturn, but a cold snap will not only deplete scarce energy reserves, but also drive the price of energy higher. It is therefore too early to say for sure that the eurozone economy will avoid a painful recession. 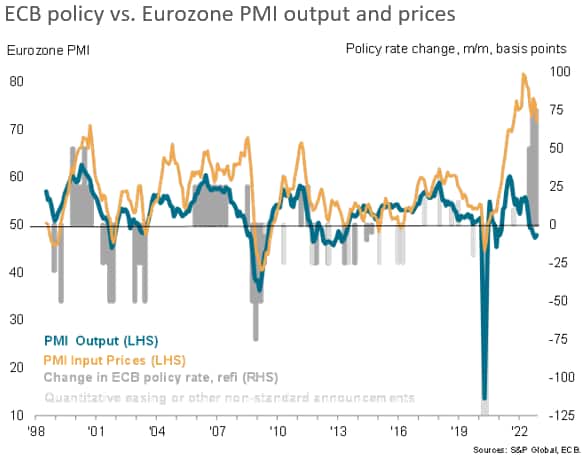