Flash PMIs released in the coming week across major developed economies offer a first look into the degree to which these countries have been affected by the Ukraine war and China lockdowns so far in April. Data out of China including Q1 GDP, March retail sales and industrial production will also offer clues on the impact of the stricter COVID-19 restrictions on economic activities. Meanwhile Canada and the eurozone update inflation figures while policymakers at Bank Indonesia meet in the week.

Midway into April, concerns over geopolitics, the global macro economy and monetary policy remain at the top of investors' minds as seen through the lens of the latest April S&P Global Investment Manager Index. The survey shows US equity market returns in the next 30 days are expected to remain in negative territory. With that said, we did find western economies, notably including the US, faring well in March on the back of easing COVID-19 containment measures that buoyed services performance. Worries over demand destruction as a result of heightened price pressures had also been temporarily allayed for the likes of the US and UK. Whether this can continue into April remains to be seen, especially with China's deteriorating virus conditions having added to supply concerns.

Likewise across in APAC, Japan felt the heightened price pressures in March due to the COVID-19 disruptions in China. Although inflationary pressures were not as severe for APAC economies compared to their western counterparts, business confidence was adversely affected, and signs of any feed through of the darkening mood into actual output and demand changes will be eagerly assessed in next week's data.

Finally, official China's Q1 GDP growth and March retail sales and industrial production data will be in focus after the latest Caixin PMI readings indicated that both the manufacturing and service sectors contracted at the fastest pace since the pandemic first began.

Flash PMI's will provide the first indications of economic in April, with insights into a number of issues eagerly awaited.

March data had shown the US and UK being buoyed by the further reopening of these economies from COVID-19 health restrictions, but growth in the eurozone had been subdued by the Ukraine invasion while mainland China sank into a steep decline amid fresh lockdown measures. Rising prices meanwhile remained prevalent, leading to a worsening inflation outlook, likely to have bene exacerbated further in April by the twin effects of China's new lockdowns and the Russia-Ukraine war.

The global economy is therefore facing numerous headwinds, with the ongoing pandemic and war in Europe adding to supply delays and inflationary pressures, the latter not only severely dampening consumer sentiment around the world as well as pushing central banks into more hawkish stances.

Key to the outlook will therefore be the degree to which demand can remain resilient in the face of these headwinds. Global service sectors are likely to be buoyed by the tailwind of the further easing of travel restrictions, but are higher prices starting to destroy demand? One insight here is the number of PMI survey respondents globally who report that their output is being buoyed by 'rising' or 'recovering' demand. So far this year, this has fallen to the lowest since the pandemic upturn began in the second quarter of 2020, lifting only modestly in March from the Omicron-induced weakness seen at the very start of the year. These data suggest much of the boost to demand from the pandemic opening up has now faded, hinting at weaker growth in coming months. 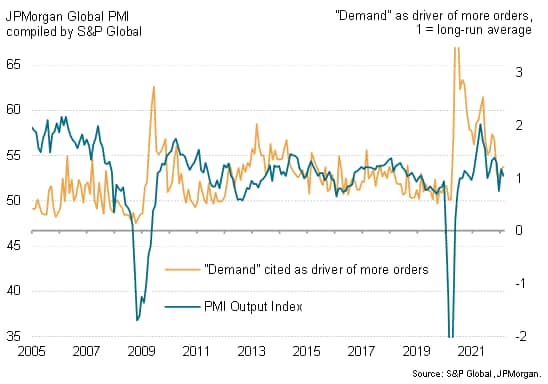 April's flash PMI surveys offer a first look into the health of major developed economies at the start of the second quarter, including the US, UK, eurozone, Japan and Australia. March PMI data showed divergences in performance between western economies, with the US and UK benefitted from the easing of COVID-19 restrictions while the APAC region suffered the effects of worsening supply constraints on the back of the Omicron variant's spread, notably in mainland China. Amid the persistent uncertainties brought about by both the prolonging of the Ukraine war and deterioration of virus conditions in China, April's data will be scrutinised for lingering effects. Specifically, sub-indices such as price indicators, suppliers' delivery times and future output will be assessed for changes in the severity of supply issues and business confidence.

Final inflation figures, industrial production and flash consumer confidence data will be due from the eurozone while UK updates retail sales data. Consumer trends are likely to have worsened in the face of decade-high inflation readings in the eurozone and UK.

The first quarter GDP reading will be due from China after annual growth slowed to 4.0% in Q4 2021. On the back of the country's struggle with outbreaks of the more infectious COVID-19 Omicron variant and the Russia-Ukraine war that broke out in Q1, growth risks have risen. Other data, including retail sales and industrial production, are also of interest for a sense of the degree to which the latest movement restrictions have affected output, particularly after the Caixin China General Composite PMI showed business activity falling at the fastest pace since February 2020. Separately, Bank Indonesia updates monetary policy next week with no changes to rates expected until H2 2022.