Private sector output rose across Japan and Australia in April as easing COVID-19 disruptions domestically supported growth of business activity. That said, external developments including the Ukraine war and COVID-19 restrictions in China added to supply chain issues, leading to longer lead times and higher price pressures for firms in both Japan and Australia. Concerns over burgeoning inflationary pressures on businesses were also often highlighted by companies in both countries, leading to another drop in business confidence at the start of the second quarter.

The latest flash PMI data showed Japan's private sector activity expanding for a second straight month and at the fastest pace since December 2021. The au Jibun Bank Flash Japan Composite PMI (compiled by S&P Global) rose to 50.9 in April from 50.3 in March. Both manufacturing and service sectors recorded modest growth in April, the latter clocking its first expansion in four months. A decline in COVID-19 cases alongside the lifting of restrictions previously in March enabled business activity to improve. That said, manufacturing sector output growth slowed according to the latest readings, with anecdotal evidence pointing to persistent supply disruptions affecting production.

Meanwhile the S&P Global Flash Australia Composite PMI rose to 56.2 in April from 55.1 in March, indicating the fastest rate of expansion in two months. Output expansion across both the manufacturing and services sector accelerated on the back of improvements in demand conditions. Overall new export orders notably rose for the first time in four months with service providers benefitting in particular from the reopening of borders. 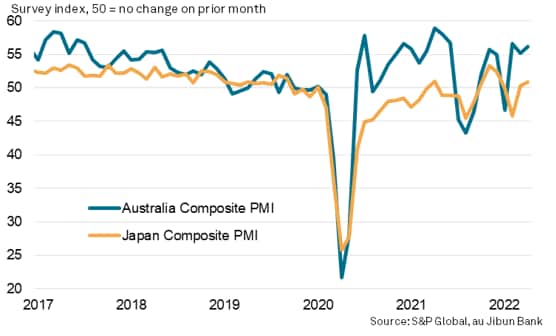 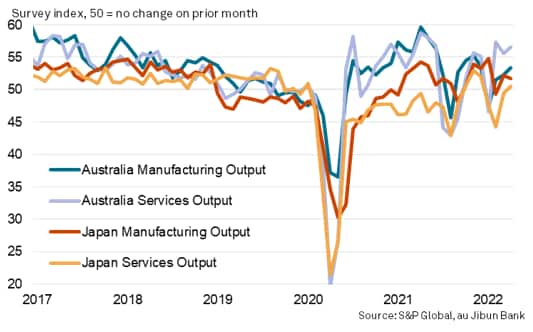 On the back of the Ukraine war and COVID-19 disruptions in China, supply issues continued to mount for firms in both Japan and Australia. While improvements were seen for some manufacturers' supplier delivery times, meaning lead times lengthened at a slower rate on average when compared to March, these were largely attributed to the easing of COVID-19 disruptions domestically according to panellists' comments. The bigger picture remained one of supply shortages and shipping delays persisting to significant extents. 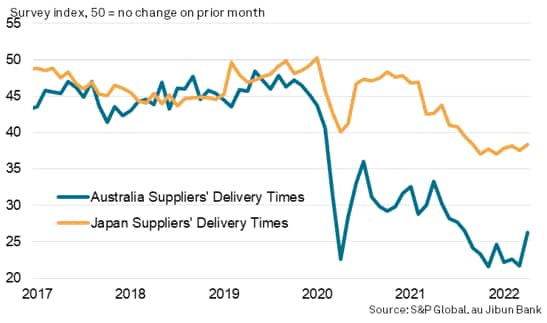 As a result, both input costs and selling prices continued to rise in Japan and Australia. Input price inflation in Australia notably soared to a fresh record high and Japan saw input costs rising at a rate second only to the August 2008 record. An array of items including higher raw materials prices, energy costs and wages were widely reported to have led to the increase in price pressures in both manufacturing and services across these APAC economies, providing early signals that we may have yet to see inflation peak in these regions even as crude oil prices eased in April. Furthermore, manufacturers were reported to have acquired inputs at a faster pace in April in both Japan and Australia, demonstrating safety stock building behaviour that may further fan the worsening of price pressures. 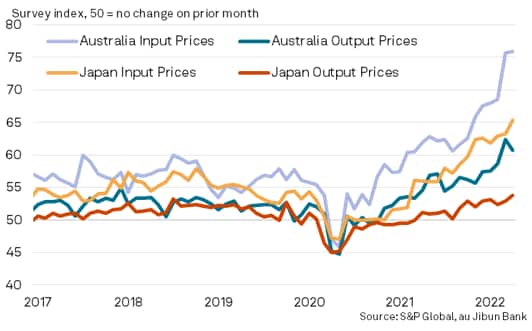 Despite the improvement in business activity growth in April, confidence amongst firms in both Japan and Australia deteriorated. The Future Output Index readings in Japan and Australia fell to eight- and three-month lows respectively in April. Panellists reported concerns over rising costs and implications of the ongoing Ukraine war on demand. Furthermore, persistent manpower issues as a result of COVID-19 disruptions and general supply shortages also dampened optimism. For Australia, worries over rising interest rates also weighed on business sentiment.

The trend with the forward-looking future output indices is a worrying one, given the fact that higher output growth in April had failed to lift sentiment, hinting at potentially deeper concerns about future economic activity performance. The good news remains that domestic COVID-19 conditions have improved in these APAC economies, which may help to support growth, though an exhaustion of this pent-up demand may then reveal the extent to which supply constraints and signs of growing risk aversion are restraining output. 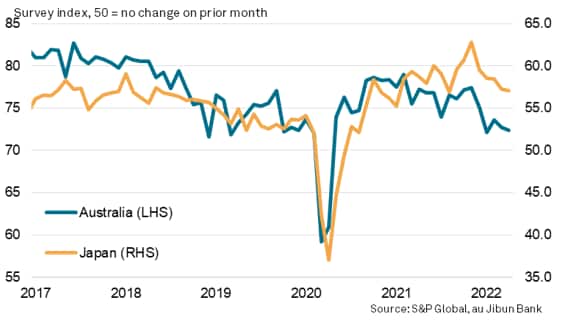 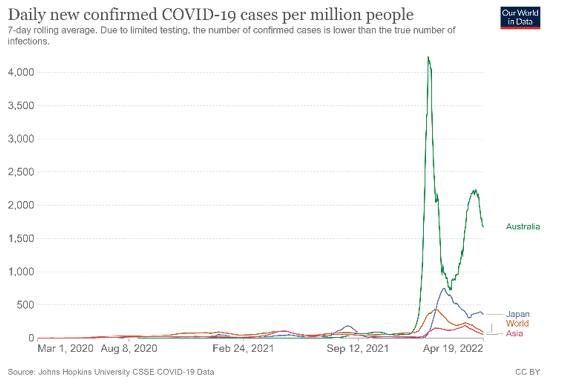