Eurozone economic growth accelerated in April as a rebounding service sector, benefitting from loosened COVID-19 restrictions, helped compensate for a near-stalling of manufacturing output. Hiring also picked up and business expectations for the year ahead lifted from March's 17-month low, albeit with confidence remaining subdued by recent standards as concerns over the Ukraine war, rising prices and the lingering effects of the pandemic continued to dampen optimism, especially in manufacturing. Prices charged for goods and services meanwhile rose at an unprecedented rate in April amid another near-record rise in firms' costs, hinting that inflation has further to rise.

The S&P Global Eurozone PMI® Composite Output Index rose from 54.9 in March to 55.8 in April, according to the preliminary 'flash' reading, signalling the strongest rate of expansion since last September and confounded consensus expectations of the economy slowing during the month. The latest reading is broadly indicative of GDP rising at a solid quarterly rate of just under 0.7%. 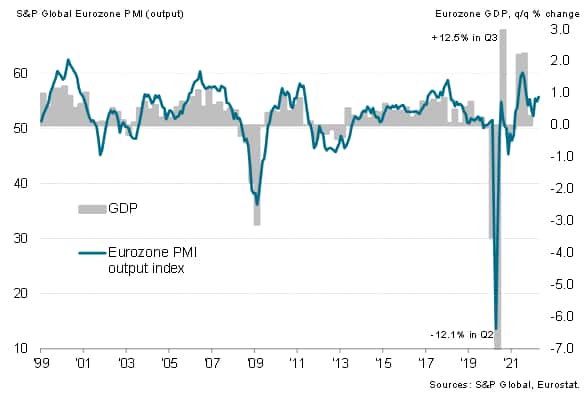 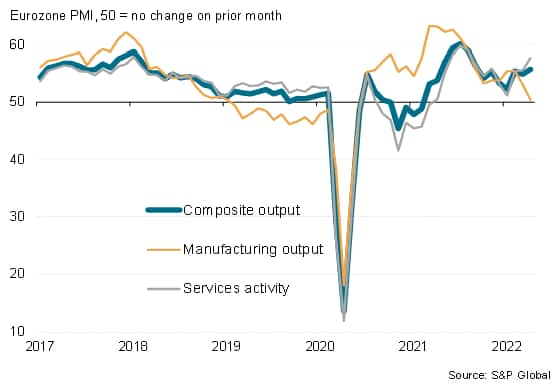 Growth trends varied markedly by sector. Business activity among service providers rose at the fastest rate since last August amid falling COVID-19 case numbers and an associated relaxation of health restrictions. April has seen virus containment measures relaxed across the eurozone to the loosest since the start of the pandemic, according to S&P Global's COVID-19 Containment Index. 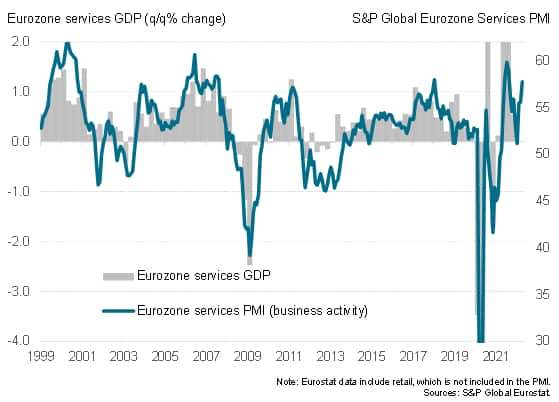 The service sector upturn was led by a boom in tourism & recreation activity, which reported an unprecedented surge in business activity.

In contrast, manufacturing output growth came close to stalling in April, registering the smallest monthly expansion since the initial pandemic downturn during the second quarter of 2020. The autos sector was particularly hard hit, recording a steepening and marked loss of output, though all other major manufacturing sectors barring tech equipment reported either slower growth, stagnation or outright falls in output. 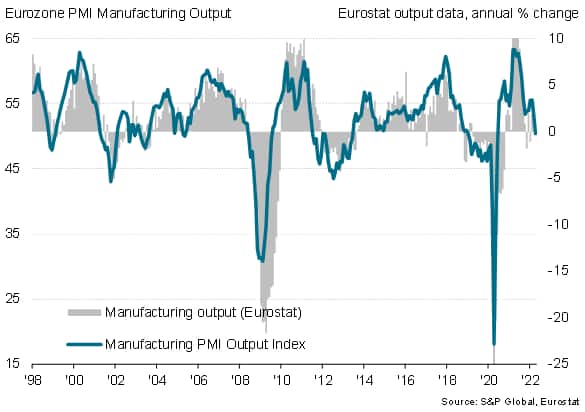 However, demand was also reported to have cooled in the manufacturing sector. New orders for goods rose at the weakest rate since June 2020, registering only a modest increase. Lost orders were blamed on soaring prices, the cost of living squeeze and signs of increased risk aversion due to the Russia-Ukraine war, as well as the shift of spending to service sector activities.

Although input cost inflation eased slightly, the rise was still the second largest ever recorded by the survey since comparable data were first available in 1998, led by a new record high in Germany. In addition to rising raw material prices, firms widely reported upward pressure on costs from energy and wages.

Higher costs were passed on to customers resulting in the largest rise in prices charged for goods and services yet recorded by the survey, the rate of increase accelerating markedly from the prior all-time high seen in March. New record rates of inflation were seen for both goods and services. 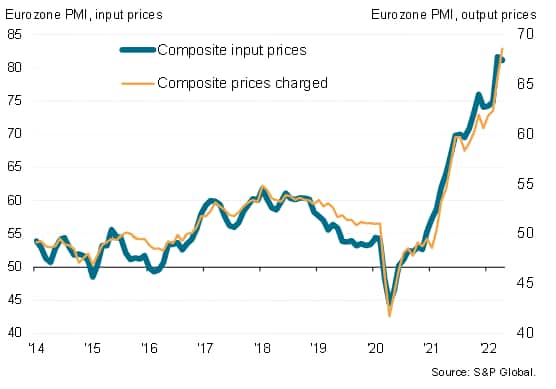 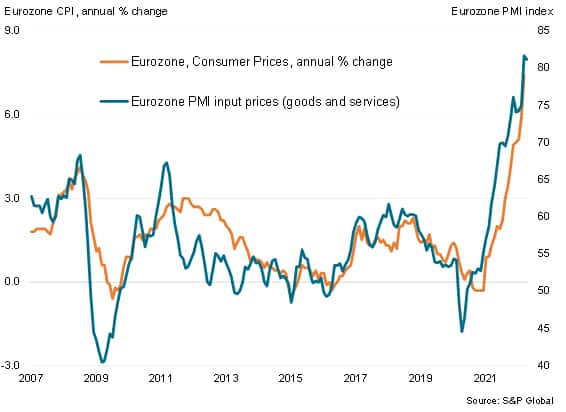 Despite increasing inflationary pressures, supply chain disruptions and the war in Ukraine, business optimism about the year ahead improved slightly compared to March, albeit remaining considerably gloomier than at the start of the year. 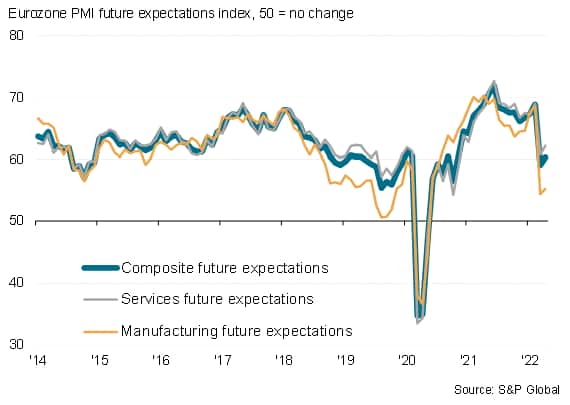 The brightening picture was led by the service sector, principally reflecting hopes of further growth benefits from pent up demand from the pandemic. While optimism also picked up in manufacturing, prospects in the factory sector remain far bleaker than seen over the past two years.

The eurozone has therefore started the second quarter on a stronger than anticipated footing, confounding consensus expectations of a slowdown. However, the weakness of the manufacturing sector is a major concern as it points to an economy that is not firing on all cylinders. Similarly, the ever-rising cost of living suggests that service sector growth could cool sharply once the initial rebound from the opening up of the economy fades, especially if business confidence fails to revive.

Policymakers may nevertheless tilt to a more hawkish stance, reflecting the persistence of unprecedented inflationary pressures at a time of encouragingly robust economic growth. 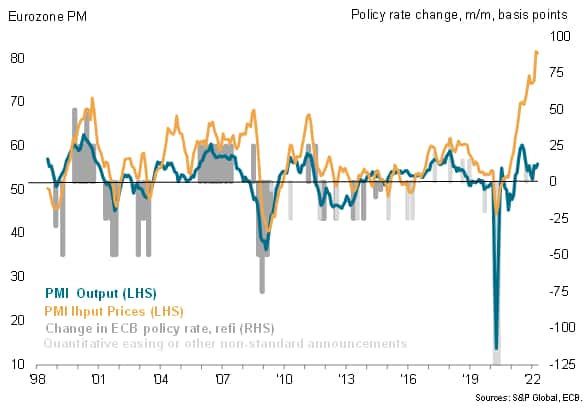