Central bank meetings will be in abundance in the coming week across the eurozone, Canada, New Zealand, South Korea and Singapore. Other key economic events include US, UK, and mainland China inflation releases for March as well as US retail sales and industrial production. Also watch out for UK March GDP data while the advance Q1 GDP in Singapore offers a first look into 2022 growth conditions in the APAC region.

With the US Fed gripped firmly by inflation concerns according to the latest March Fed FOMC minutes, next week's US CPI data will be amongst the top watched economic releases around the globe. As far as March's PMI data suggested, US firms' selling prices continued to climb last month, notching up the joint-sharpest rise since data collection began in October 2009. Consensus expectations similarly point to quicker inflation against the backdrop of the Ukraine war and the consequent commodity price hikes. Accompanying the CPI and PPI data updates will also be Fed comments through the week, rhetoric crucial in guiding the market with respect to their accommodative removal plans, as well as retail sales and industrial production updates to guide on economic trends in March.

More central banks are meanwhile expected to follow the Fed's lead in taking a more aggressive policy stance the coming week. Specifically, the Bank of Canada (BoC) and Reserve Bank of New Zealand (RBNZ) are both expected to raise interest rates in the fight against inflation, with the BoC potentially delivering more than the 25-basis points moves that we have seen of late from other central banks. The European Central Bank's (ECB) post meeting communique will also be crucial following recent signals of rate hike intentions, though any moves are not expected until later 2022. The Monetary Authority of Singapore's (MAS) exchange rate settings will also be in focus.

Finally, GDP data from the UK and Singapore come at an interesting time, with both regions showing continued growth despite indications of a slowdown in global growth in March, according to the latest PMI data.

Cost of living crisis to worsen

The coming week sees inflation updates for the US, mainland China and the UK, which are expected to show the cost of living crisis intensifying. Worse is yet to come, as signalled by new highs for many PMI survey price indices, which showed business costs rising at a rate not seen since 2008 in March. These higher costs are being increasingly passed on to customers, leading to record rates of inflation in the US and Europe. 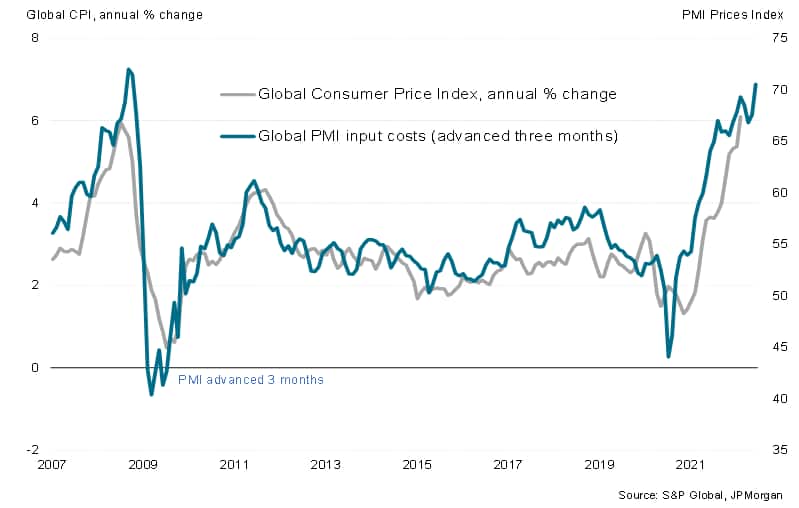 Perhaps of greatest concern is the soaring cost of food, the S&P Global PMI price index for which remained close to record highs again in March, with the Ukraine invasion widely expected to create additional upward pressure on agricultural commodity prices. Further increases in food cost inflation will hit the poorest the hardest. Such pressure on those with the lowest incomes adds not only to risks of demand growth weakening, but in the past has also been a catalyst of social unrest. 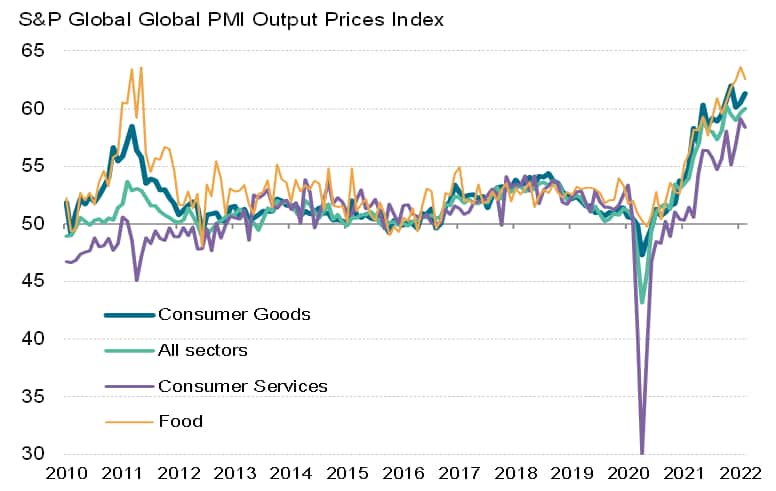 March consumer and producer price data out of the US will be closely watched and follows the release of the March Fed FOMC meeting minutes which signalled the Fed's growing determination in tackling high inflation. Consensus expectations currently point to an acceleration of headline CPI from the 40-year high of 7.9% year-on-year (y/y) in February to 8.3% in March. Core CPI is likewise expected to tick up to 6.6% y/y, which could garner further concerns from a market that is already pricing in a 50-basis points (bps) interest rate hike in May. The S&P Global US Composite PMI showed output charges rising at the joint-sharpest pace since data were first available in 2009. Fed comments across the week are also expected to be in focus. US retail sales will also be eagerly assessed for signs how spending is holding up amid the soaring cost of living.

Meanwhile we anticipate the Bank of Canada to deliver a 25bps hike at its April meeting, followed by two more thereafter. Improving domestic demand conditions is expected to enable the BoC to focus on tackling inflation.

The ECB convenes in the coming week with their rhetoric in focus after having signalled intentions to potentially raise interest rates later this year despite the Ukraine war uncertainties. While we are not expecting rate hikes until Q4 2022, how aggressive the ECB may be remains a key question for the market.

Central bank meetings in New Zealand, South Korea and Singapore will also unfold, with the RBNZ expected to raise interest rates and the MAS to make changes to the Singapore dollar NEER at the upcoming meetings.