The UK economy sustained a modest pace of expansion in June according to preliminary PMI survey data, and also saw steady strong employment growth. However, the recovery is looking increasingly uneven, and the outlook has deteriorated markedly. Forward-looking indicators are hinting that growth is likely to deteriorate sharply in the coming months. Meanwhile, price gauges remain worryingly high to suggest that elevated rates of inflation will persist for some time to come, albeit with some signs appearing that the rate of increase could peak soon. 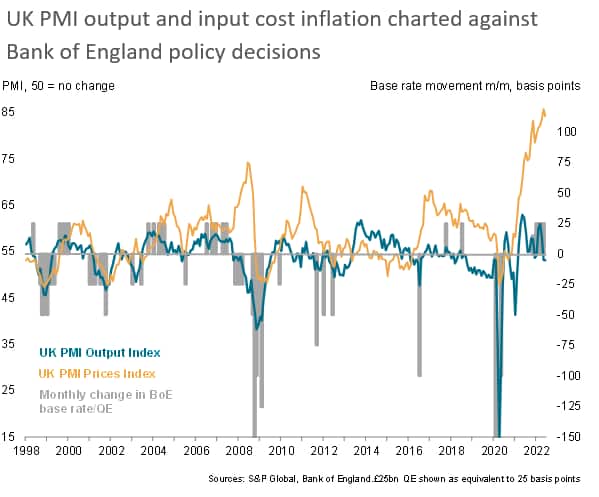 The S&P Global/CIPS UK composite PMI™ held steady at 53.1 in June, according to the preliminary 'flash' reading based on about 85% of normal replies. The unchanged rate of growth is the lowest since the COVID-19 lockdown of February 2021, underscoring the downshifting in the rate of growth that has been evident since the initial reopening of the economy from the restrictions imposed at the turn of the year to deal with the Omicron wave. At the current level, the PMI is broadly consistent with GDP rising at a modest quarterly rate of 0.2-3%. 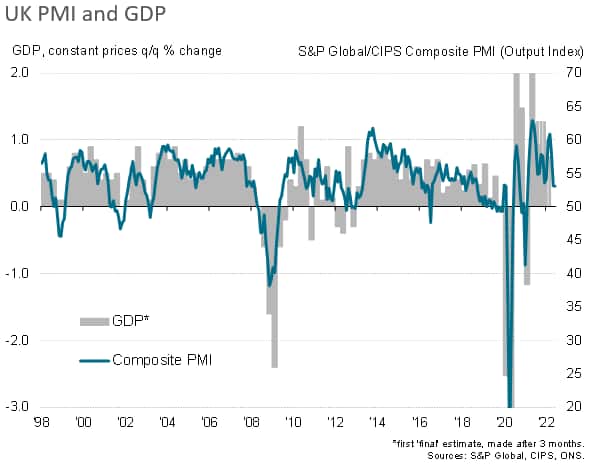 The survey data also showed employment continuing to rise at a solid clip in June, often as firms sought to rebuild capacity lost amid the pandemic due to shortages of labour. June's increase extends an impressive run of jobs growth which has been evident since March of last year. 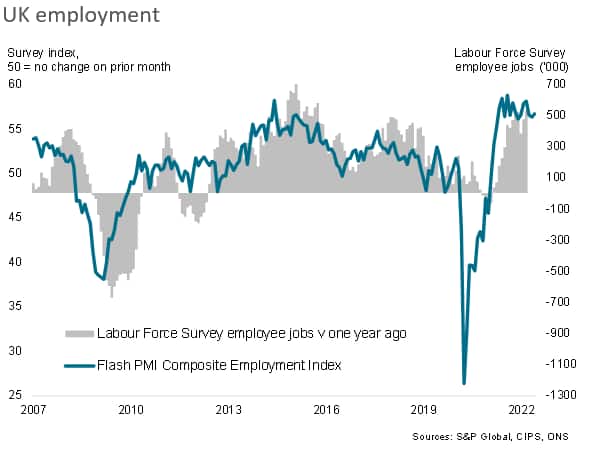 Such impressive hiring and steady economic growth look unlikely to last, however, in part due to the uneven nature of the recovery.

Manufacturing output growth slowed in June to the weakest since February 2021, down to a level which is historically consistent with the goods producing sector contracting for a second successive month, to thereby act as a drag on GDP. With stocks of finished goods rising at the steepest rate for 32 months, firms may seek to reduce production further in coming months unless demand revives. 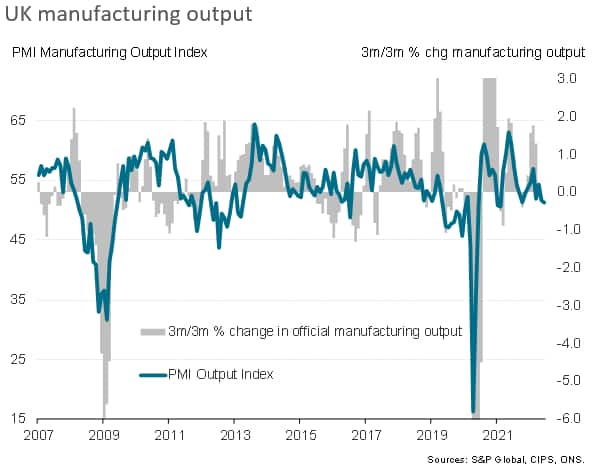 The service sector as a whole retained greater resilience than manufacturing, but has likewise seen growth weaken sharply since earlier in the year. While consumer spending continued to help drive the service sector expansion, notably in terms of exports, the hotels and restaurants sector has notably already seen its recent growth spurt after the Omicron wave move into reverse amid the cost-of-living crisis, with business activity and inflows of new business falling steeply in June. Business services have also seen growth almost come to a standstill in the past two months, and financial services growth has likewise weakened considerably in the second quarter. 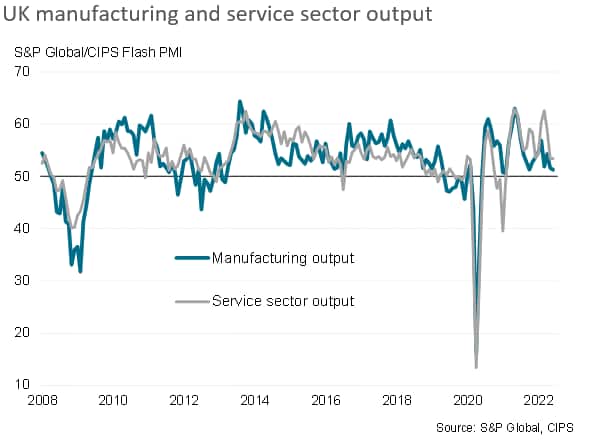 The data also hint that worse is yet to come, because the current expansion is being supported by orders for goods and services placed in prior months rather than new demand. Inflows of new business rose only modestly in June; the rate of increase having slowed markedly compared to May to register the weakest monthly gain since February 2021.

New orders for manufactured goods fell slightly, dropping for the first time in almost one and a half years, while new business placed at service sector firms rose only slightly, registering the slowest expansion in the past 16 months.

One area of divergence between the two sectors was overseas trade. While exports of goods continued to fall in June, exports of services rose at one of the fastest rates seen since the pandemic, buoyed by looser travel restrictions. 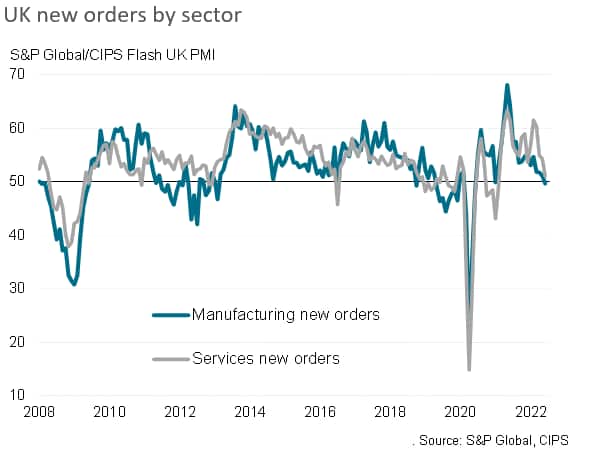 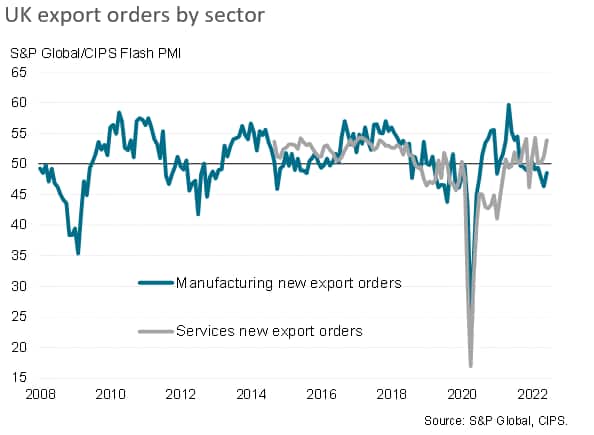 Other forward-looking indicators also point to worsening growth in coming months. In addition to the dearth of new orders, business expectations regarding output in the coming year fell to a degree exceeded only twice in the past decade of survey history. Only the start of the pandemic and the 2016 EU referendum saw bigger falls in sentiment. The latest decline takes business confidence to the lowest since May 2020.

Business prospects darkened amid reports of growing concerns over the cost-of-living crisis, and notably soaring energy costs, as well as higher interest rates, Brexit and slower economic growth both at home and abroad.

Both the new orders and future business expectations survey gauges are now down to levels which have in the past typically heralded an economic contraction, with the future expectations index looking especially low, signalling a heightened risk of imminent recession. The survey's inflation gauges meanwhile remained elevated to indicate that the cost-of-living crisis is set to persist for some time to come. However, the survey's input cost gauge fell from the all-time high registered in May to at least hint at a possible peaking in the rate of inflation. Inflationary pressures eased most noticeably in the manufacturing sector, assisted by a further reduction in the number of supply chain delays reported compared to prior months. Suppliers' delivery times - a key gauge of inflationary pressures in the manufacturing sector - lengthened to the smallest extent since October 2020. That said, it should be noted that consumer price inflation lags the PMI input cost index by several months, so CPI still looks set to rise above its current level of 9.1% before starting to fall later in the year. 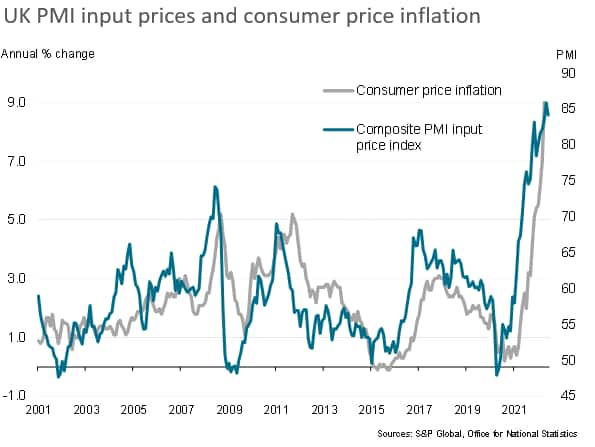 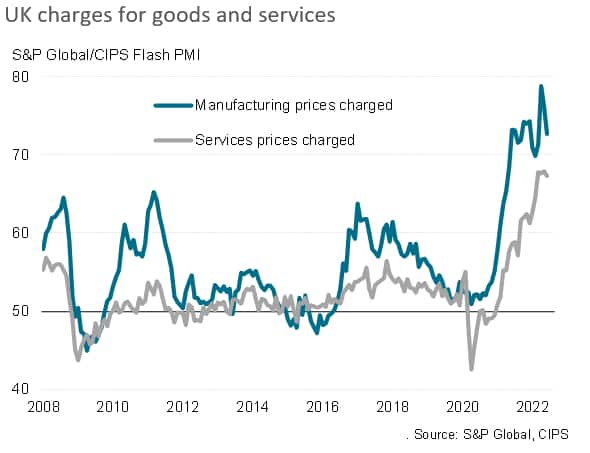 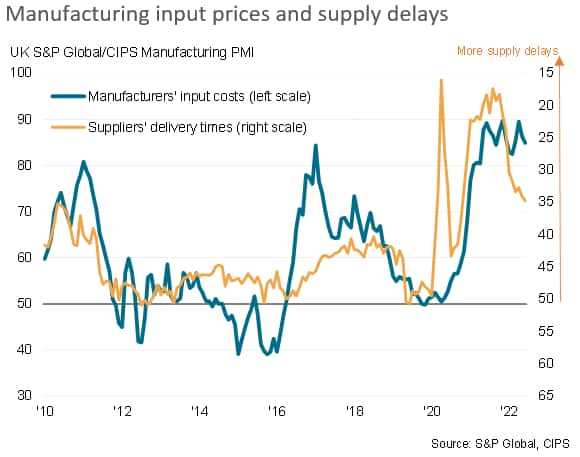 June's survey data suggest that the economy is starting to look like it is running on empty. Current business growth is being supported by orders placed in prior months as companies report a near-stalling of demand. Manufacturers in particular are struggling with falling orders, especially for exports, and the service sector is already seeing signs of the recent growth spurt from pent-up pandemic demand move into reverse amid the rising cost of living.

Business confidence has now slumped to a level which has in the past typically signalled an imminent recession. The weakness of the broad flow of economic data so far in the second quarter points to a drop in GDP which the forward-looking PMI numbers suggest will gather momentum in the third quarter.

While there are some signs that inflation could soon peak, the survey data suggest the rate of inflation will meanwhile remain historically high for some time to come, indicating that the UK looks set for a troubling combination of recession and elevated inflation as we move into the second half of the year.