Eurozone economic growth deteriorated sharply to a 16-month low in June, according to preliminary PMI data, reflecting a stalling of demand growth. Manufacturing output contracted for the first time in two years and the expansion in service sector activity cooled considerably, easing most notably for consumer-facing services.

Companies also scaled back their business expectations for output over the coming year to the lowest since October 2020. Both the stagnation of demand and worsening outlook were widely blamed on the rising cost of living, tighter financial conditions and concerns over energy and supply chains linked to the Ukraine war and ongoing pandemic disruptions. Price pressures meanwhile remained elevated at levels not seen prior to the pandemic, though a moderation of cost growth for a third successive month hinted at a peaking in the rate of inflation.

The seasonally adjusted S&P Global Eurozone PMI® Composite Output Index fell from 54.8 in May to 51.9 in June, according to the early 'flash' reading. While the latest reading indicates an expansion of business activity for the sixteenth straight month, the rate of growth has moderated for two consecutive months to its lowest in the current sequence of expansion. 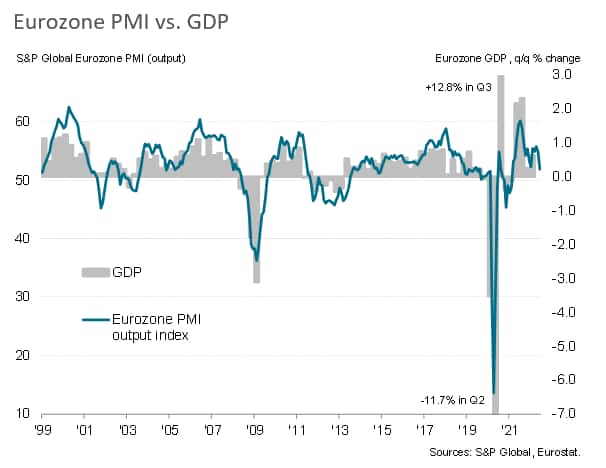 Excluding pandemic lockdown months, June's slowdown was the most abrupt recorded by the survey since the height of the global financial crisis in November 2008.

New orders for goods and services meanwhile stagnated, failing to rise for the first time since the recovery of demand began in March 2021.

Manufacturing led the deterioration, with output falling for the first time in two years. Although only modest in June, the rate of decline of factory output looks set to accelerate in July given a steepening loss of new orders received during the month. New orders for goods have now fallen for two consecutive months, with June seeing the sharpest decline since May 2020. 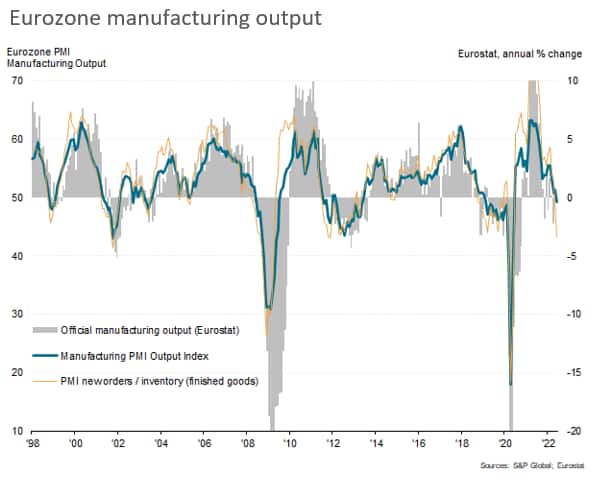 Looking into further detail within the service sector, June saw the record surge in growth of tourism and recreation enjoyed over April and May falter to a near stand-still. Companies blamed the rising cost of living and a fading of pent-up pandemic-related demand. The faltering of the consumer rebound in demand for services was accompanied by renewed falls in banking and real estate activity amid tightening financial conditions. Transportation and industrial services growth also slowed, in part reflecting the deteriorating manufacturing environment. 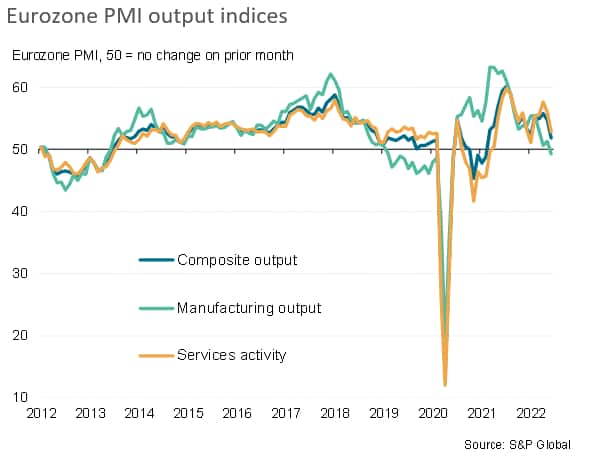 Factory output continued to be constrained by widespread supply shortages, often linked to the Ukraine war and China's lockdowns, but the overall incidence of delays continued to moderate. Average suppliers' delivery times consequently lengthened to the least extent since December 2020. However, this easing of supply delays could be in part traced to lower demand for inputs, which stalled in June - contrasting with surging growth seen throughout much of the past two years - in turn linked to the largest build-up of unsold warehouse inventories for over two years.

One benefit of this easing in demand seems to have been some alleviation of price pressures in manufacturing supply chains, with factory input costs in June rising at the slowest rate since March 2021. 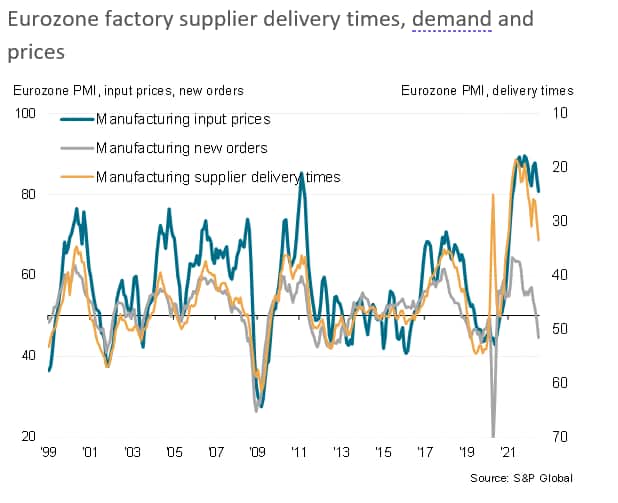 In contrast to the easing of raw material price pressures seen in manufacturing, the service sector saw its rate of input cost inflation accelerate to the steepest since April, in part reflecting the pass-through of prior raw material and energy cost increases to wages. 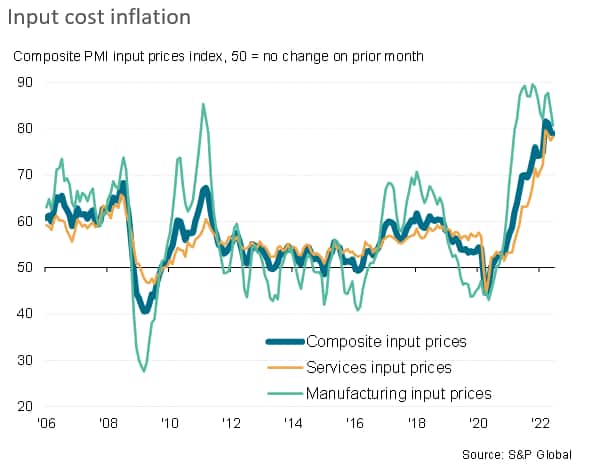 However, although average prices charged for goods and services rose sharply again in June, remaining significantly higher than anything seen prior to the pandemic over the survey's 25-year history, the rate of inflation eased further from April's all-time high to the lowest for four months. Rates of selling price inflation cooled in both manufacturing and services, often linked to weaker demand conditions and prompting firms to offer discounts or swallow higher costs via lower margins. 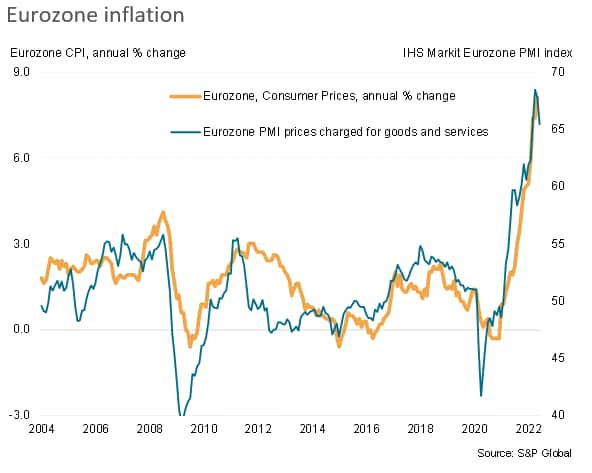 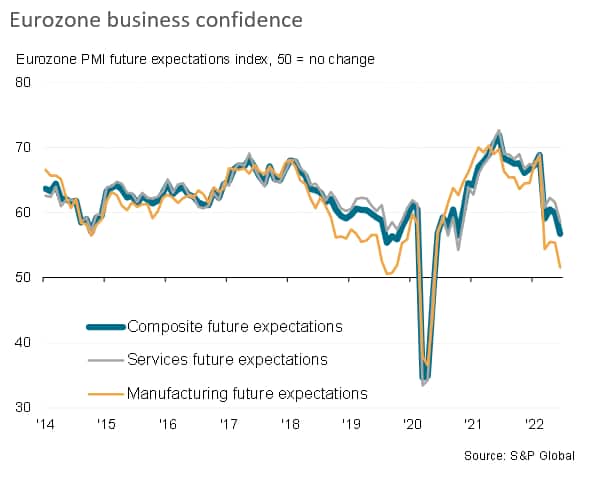 The June PMI survey data came in below market consensus, with a composite PMI reading of 51.9 comparing with an expected reading of 54.0 according to Refinitiv. Alongside the lower price gauge readings in June, the survey may therefore lead to some paring-back of interest rate expectations, though the ECB will likely require more evidence of inflationary pressures to be retreating meaningfully before providing any updated guidance. 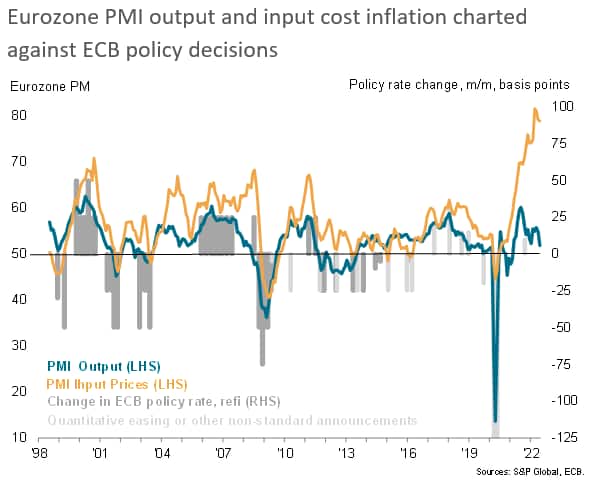