Early PMI survey data showed economic growth slowing sharply in the US, Eurozone and UK during June, with further weakness likely in coming months. Forward-looking indicators, such as survey gauges of new order inflows and business expectations of output in the coming year, have fallen to levels indicative of the US and European economies contracting in the third quarter absent a sudden revival of demand. However, with central banks providing forward guidance of more interest rate hikes to come, demand looks set to soften further rather than revive, adding to the likelihood of economies moving into recession.

Inflationary pressures meanwhile remain elevated - a factor commonly cited by companies as causing the recent weakening of demand for non-essential goods and services in particular. However, the flash PMIs for June also indicated some softening of price pressures, notably in the manufacturing sector, linked to an easing of supply constraints and reduced demand. In other words, the softening of demand is already doing some of the work of higher interest rates, hence markets are likely to rein in their expectations of the extents to which the major central banks might need to tighten policy. 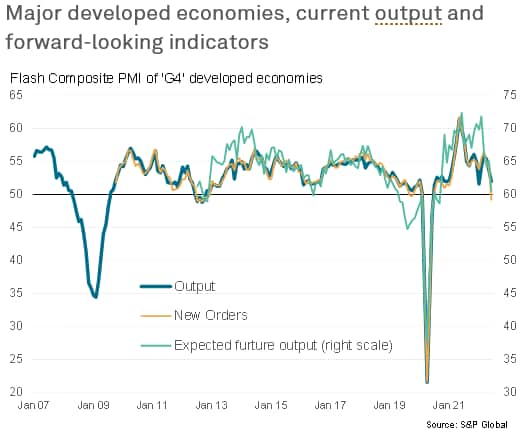 Provisional PMI survey data indicate that aggregate growth across the four largest developed economies - the 'G4' - slowed sharply in June to the weakest since the pandemic lockdowns in January. The flash PMI survey output indices from S&P Global collectively registered 51.9, down from 53.5 in May to indicate a third successive month of slowing growth.

Manufacturing across the G4 slipped into a marginal decline, registering contraction for the first time since the early hit from the pandemic in June 2020, and service sector growth weakened to the slowest since January. Excluding months in which governments stepped up COVID-related containment measures, June saw the worst service sector performance since late 2019. 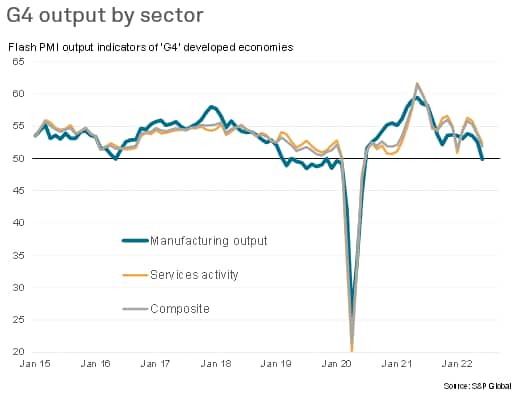 The US reported the slowest expansion of the G4, with the S&P Global flash PMI for the US dropping from 53.6 in May to 51.2 in June, its lowest since January's lockdowns and the second-lowest over the past two years. Factory output fell for the first time since May 2020 and service sector growth sank to its lowest since January. At its current level, the US PMI is broadly consistent with annualized GDP growth of just under 1% (around 0.2% quarterly).

The flash S&P Global Eurozone PMI® Composite Output Index also fell sharply, down from 54.8 in May to 51.9 in June, indicating that the rate of growth has now moderated for two consecutive months to hit its lowest in the current 16 month recovery period. The eurozone index is now comparable to quarterly GDP growth of just 0.2%, down from 0.6% at the end of the first quarter. As in the US, eurozone manufacturing contracted, albeit only modestly, for the first time in two years and service sector growth slowed sharply.

Growth meanwhile held steady in the UK, as the flash composite PMI was unchanged at 53.1 in June, yet this nevertheless represents a marked weakening in the rate of expansion since earlier in the spring, with the PMI broadly consistent with GDP rising at a modest quarterly rate of just over 0.2%. UK manufacturing production slipped into decline for the first time in 17 months, though the service sector retained a modest rate of expansion.

The strongest growth in the G4 was consequently recorded in Japan. The au Jibun Bank composite PMI™, compiled by S&P Global, rose from 52.3 in May to 53.2 in June, its highest since last November and the fourth-best reading since the start of 2014. June's further improvement signals a return to growth for the economy after GDP contracted 0.1% at the start of the year. However, the economic upturn was uneven, being fueled by rising demand for services while exports fell and factory output growth ground to a near-halt. 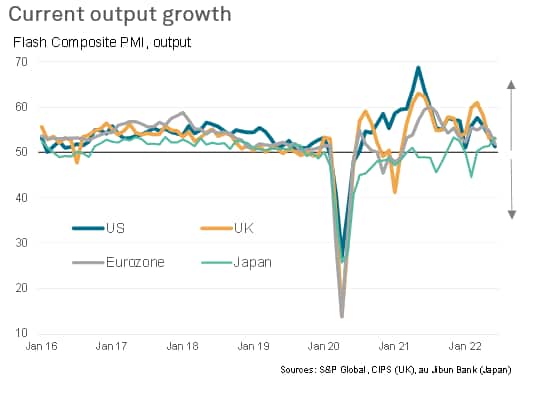 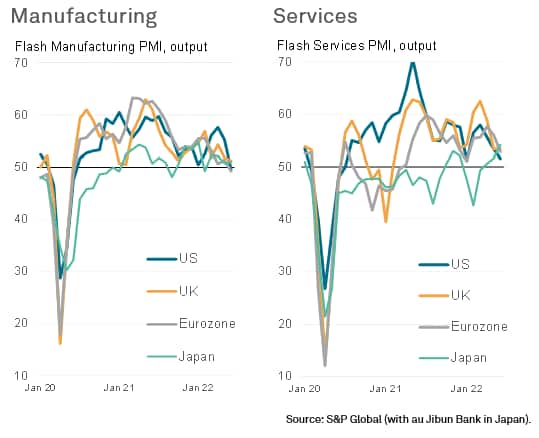 Although output continued to rise across the four economies on average, albeit at a reduced rate, the pace of expansion looks set to weaken further in July, as new business inflows across the monitored economies fell in June for the first time in two years. This lack of new demand hints at contraction in the third quarter. New order inflows fell most sharply in the US, and stalled in the eurozone. Only a marginal gain was seen in the UK.

While a more sizeable improvement was recorded in Japan, this is part reflects the later reopening of the Japanese economy from the Omicron variant than in Europe and the US.

Across the West, growth had been buoyed by increased spending on consumer services such as travel, tourism, recreation and hospitality in prior months, as pandemic-related restrictions were wound down after the Omicron wave. This surge due to pent-up demand is already starting to fade and in some places reverse, blamed in many instances on the rising cost of living. While Japan is still benefitting from this stimulus in June, the experience in the US and Europe hints at the boost fading in coming months. 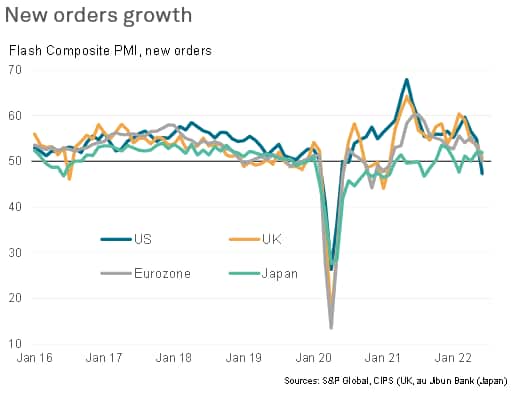 Adding to the gloom for the months ahead were the survey gauges of companies' future output expectations. With the exception of Japan, business sentiment sank sharply lower. By historical standards, the steepest drop in future expectations was seen in the UK, followed by the eurozone and US. All three gauges are now at levels which have in the past heralded imminent economic downturns.

In general, companies grew more downbeat due to growing concerns over the rising cost of living and high energy prices in particular, with an accompanying concern over tightening financial conditions. Tight supply conditions and uncertainty caused by the Ukraine war, were also widely cited, as well as broader worries regarding general economic growth in the year ahead.

Japan bucked this gloomier trend, however, with future output expectations climbing to a seven-month high. Companies were hopeful of more demand from the economy reopening and easier supply conditions out of mainland China in the months ahead. 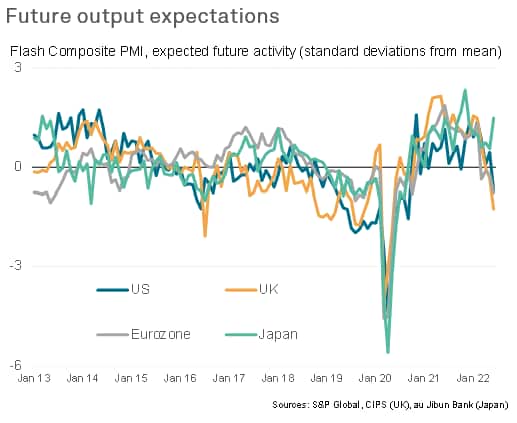 A positive development from the recent cooling of demand was a reduction in the number of new supply delays reported in June. Average supplier delivery times lengthened in June to the least extents since late-2020 and early 2021 across Europe and the US, and even eased slightly in Japan amid some opening up of trade with China due to looser pandemic restrictions. 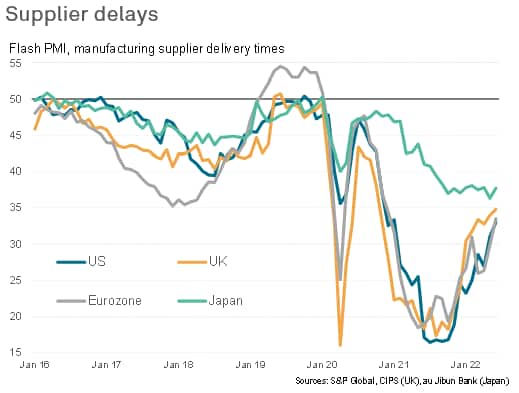 A consequence of the moderating supply chain squeeze and weakening demand environment was a reduction in pricing power among suppliers. Across the G4, average factory input costs rose in June at the slowest rate since May 2021, despite the rate of increase remaining elevated. 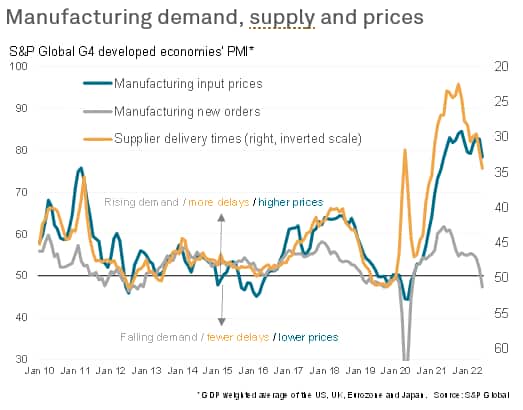 The moderation of input cost inflation for goods, as well as the broader calming of demand conditions, in turn fed through to slower rates of inflation for average prices charged for both goods and services in the US, eurozone and UK. The exception was again Japan, where the rate of inflation hit a new record high, reflecting Japan having lagged in the current cycle. 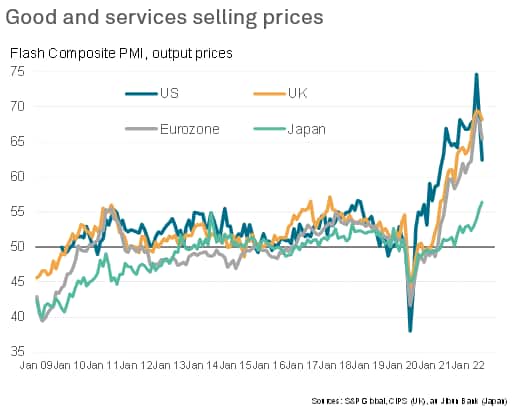 The weakening PMI data come at a time when central banks have been ratcheting-up their hawkish stances, most notably at the FOMC and ECB and to a lesser extent the Bank of England. Already, the PMIs and their forward-looking components are signalling a high likelihood of third quarter GDP contractions in the US, eurozone and UK. Clearly any further dampening of demand which could result from further policy tightening now runs an increased risk of the slowdown turning into an even steeper economic contraction.

Meanwhile, the recent cooling of demand is already showing signs of helping to calm inflationary pressures, though it remains early days and overall rates of inflation look set to remain elevated in the coming months even if peaks are soon reached. 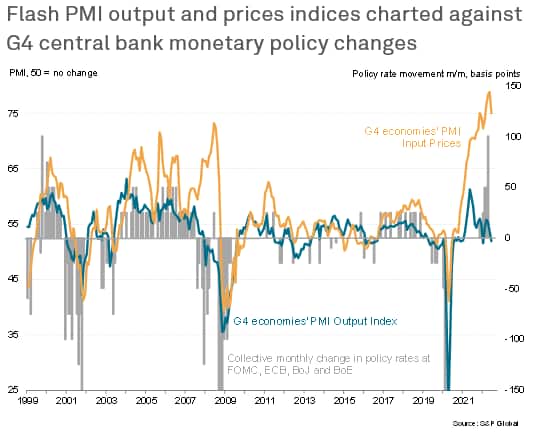